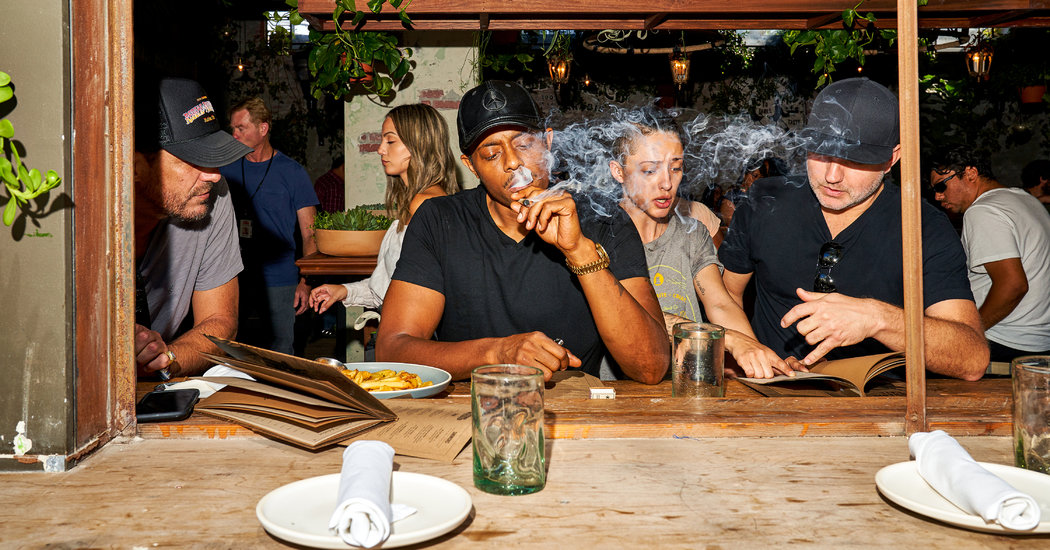 [Sign up for our daily newsletter about news from California here.]

WEST HOLLYWOOD — The food at West Hollywood’s first weed restaurant, Lowell Farms: A Cannabis Cafe, isn’t actually infused with weed. But the cuisine could certainly be described as cannabis complementary.

There are vegan nachos and upscale corn dogs; French fries and Angus burgers; and crispy brussels sprouts as well as baby kale and garden salads for those with more virtuous palates when they’re high. (Because, really, what’s nicer than sharing a joint over a plate of edamame and shaved asparagus?)

The restaurant, which opened on Oct. 1 and has been packed every day since, is part of West Hollywood’s effort to make the city a kind of cannabis destination within Los Angeles County. Earlier this year voters approved extra taxation on cannabis businesses. West Hollywood estimates that weed tourism will bring in $5 million to $7 million in tax revenue annually.

“And that’s a conservative estimate,” said John Leonard, who is unofficially known as West Hollywood’s weed czar and whose official job title is community and legislative affairs manager. “We think this will drive more hotel nights in the city, that it will drive more people to come into the city, to go to our restaurants and bars, and patronize our other businesses.”

In other words, Lowell Farms is only the city’s first cannabis consumption lounge. Others in the works include Aeon Botanika, where one can experience cannabis-enhanced acupuncture and nutrition therapy, and Budberry, which will serve cannabis-infused edibles that customers can enjoy in a garden with a koi pond.

Lush potted plants and slowly rotating fans hang from the ceiling of Lowell Farms, which is split between a cozy dining room and a large shaded patio. A wraparound bar in the center of the space serves coffee. There are juices with ginger and turmeric; no alcohol is allowed.

A hip wait staff takes food orders, while roving “flower hosts” — a sort of weed sommelier — hand out thick tomes with lists of cannabis options. (“How do you want to medicate?” one asked, cheerfully.)

On the weed menu are vape pens with “cold pressed cannabis oil” ($60), loose marijuana (“sold by the eighth ounce”), crystal-clear gravity bongs for rent, and pre-rolled joints including the options Kushberry Cheesecake ($20, “invigorating, active”) and Kosher Dog ($27, “soothing, mood booster”), which came rolled up with a tiny spiral noodle as the filter. Heady smoke fills the air in spite of the well-publicized, state-of-the-art ventilation system.

Crucially, the Lowell Farms logo — an outline of a horned goat head — has been installed in neon lighting for optimal Instagramming.

Cannabis seems to have replaced tequila as the celebrity product of choice. Famous people, including Joe Montana, Jay-Z and — er, checks notes — John Boehner, the former speaker of the House, have invested in cannabis.

Some notable longtime connoisseurs, like Snoop Dogg and Willie Nelson, have had their own brands for years.

It’s easy to see why the industry has a particular sheen.

Companies like Med Men, which runs dispensaries, are positing California as a kind of post-Prohibition utopia with a Silicon Valley twist.

“A product that drove people to the black market is now creating a new global market,” intones a cinematic Med Men ad released earlier this year, directed by Spike Jonze. “Here’s to the new normal.”

Last year, according to BDS Analytics, California had $2.51 billion in legal adult-use cannabis sales — by far the most in the nation. That outpaced Colorado, where recreational marijuana has been legal for a little more than five years, by 60 percent.

Of course, there are complications. As The New York Times has reported, legal weed sellers have struggled to make a dent in the illegal market, which means the promised tax windfall hasn’t yet made its way to public coffers.

And because state and local cannabis regulations still don’t always exactly mesh, Lowell Farms is, for now, separated into two businesses that operate under one roof: One is a dispensary and one is a restaurant. (Hence, the separate waiters for food and “flower.”)

For Lowell Herb Company, the fast-growing marijuana business behind both ventures, it is the ultimate act of branding. “You’re going to have this first experience,” said David Elias, the chief executive of Lowell. “And you’re having it at our cafe, with our brand, with our product.”

Mr. Elias, who is built like a bouncer and who has a background in night life promotion, said that in California’s nascent legal cannabis sector, investors see a gusher of previously untapped consumer spending.

But there is very little mainstream brand recognition among competing weed companies. He aims to get out in front of that.

Industry boosters say that a strong, legal pot market can help correct for decades of disproportionate policing in communities of color, especially by employing people who have been hurt by discriminatory marijuana laws. But experts say it remains to be seen who will actually profit from the so-called green rush.

Ruben Honig, the executive director of the United Cannabis Business Association, a California cannabis trade group, said that the process for starting a cannabis business is time-consuming and expensive.

“In West Hollywood, these applicants paid hundreds of thousands of dollars to be a part of this,” Mr. Honig said. “And there are large businesses across the world who would take these licenses for large sums of money.”

From the vantage point of some officials, the onerousness keeps out bad actors who may be tempted to cut corners on what is complex and evolving legal terrain. On the other hand, it’s a huge barrier for would-be entrepreneurs who may not have access to outside investment or other more traditional funding sources.

“If a year down the line, folks of color, who have been disproportionately affected by our draconian drug policies, are not the beneficiaries of this new market, then we’re not being true to what we should be trying to accomplish,” said Danielle Jones, a supervising attorney at the Stanford Community Law Clinic who works to help formerly incarcerated people clear their records. “I have more questions about that than I do answers, but as time ticks on, that’s going to be our best evidence.”

The executive chef of Lowell Farms, Andrea Drummer, got interested in cannabis because she didn’t want to use opioids to treat the aches and pains of working in fine dining restaurants.

She was employed at a large hotel that had strict drug testing policies, even in places where medical-use cannabis was legal. After a friend asked her to make pot brownies, she began experimenting with cannabis-infused meals.

She also experienced a period of homelessness.

For about nine months — including during the time when she created a cannabis-infused dinner for Chelsea Handler’s Netflix series, “Chelsea Does …” — Ms. Drummer slept in her car. During the day, she would set up at a Starbucks.

Her respite, Ms. Drummer said, was visiting the famed farmers’ market in Santa Monica to talk with vendors and sample their products.

When she developed the (cannabis-free) farm-to-table menu for Lowell Farms, where she is also a partner, she said she was excited to work with many of those same food purveyors. “Something about coming back in this capacity was just a beautiful thing for me,” she said.

Ms. Drummer, who is black, said she tries not to focus on her status as a pioneer in the cannabis industry — not to mention as a woman of color running a notable restaurant kitchen in an industry where that is still uncommon.

“I try to do my part in practice,” she said. “And if you come to the cafe and take a peek into the kitchen, you’ll see social equity.”

Mr. Elias said that Lowell Herb Company has tried to recruit workers who have been convicted of nonviolent marijuana offenses. The company, at one point, took out a billboard near Men’s Central Jail in Los Angeles, which he said yielded about 100 résumés.

But the program doesn’t extend to those with any other types of offenses. (Criminal justice experts say widespread unwillingness to hire anyone with a conviction is a much broader problem.)

In pursuit of expansion, Mr. Elias said the company recently bought a farm near Santa Barbara, which was set to be zoned for 10 acres of pot fields. He envisions the site as a draw to customers, just like the region’s vineyards.

“We’re working on tastings at the farm,” he said. “Which is absolutely breathtaking.”