“Imagine running a race with brand-new shoes and a burst of energy but no idea what the course looks like,” says Kristen Nichols, in the 2019 Hemp & CBD Industry Factbook, “That’s somewhat the position in which today’s hemp industry finds itself.”

From the looks of things, that race is attracting lots of participants. Retail sales of CBD in the U.S. are expected to surpass $1 billion in 2019 – a 133% increase over 2018 sales according to the report, which is produced by the editors of Hemp Industry Daily. Sales may go beyond $10 billion by 2024, it says.

The hemp supply chain from grower to manufacturer to retailer is looking to capitalize on the new legal status of hemp and the growing popularity of the non-psychoactive ingredient CBD, even if the array of over-the-counter health and wellness products lacks medical testing.

Uncertainty has always been part of the nascent THC and CBD markets. When Julie Berliner started the Sweet Grass Kitchen edibles company in Colorado, the cannabis regulations were changing so rapidly that she built her first kitchen in a race car trailer. “The idea was that if the rules change…I could pick up and move my kitchen to another facility with minimal loss,” she said. The trailer was an insurance policy of sorts. Berliner said she never had to make the move, and since then has built an 8,000 square foot production facility in south Denver.

Despite ambiguity in the regulations, more are finding employment in the industry. New cannabis  and hemp ventures typically hire people across a wide range of education levels, specialties and salaries. A grower for example might hire farm workers, horticulturists, technologists to run lighting and watering systems, and managers, as well as accounting, legal, financial and marketing service providers.

Marijuana Business Daily recently published a graph based on U.S. Bureau of Labor Statistics Employment Projections showing there were more people employed in cannabis than there were flight attendants, veterinarians or web developers. 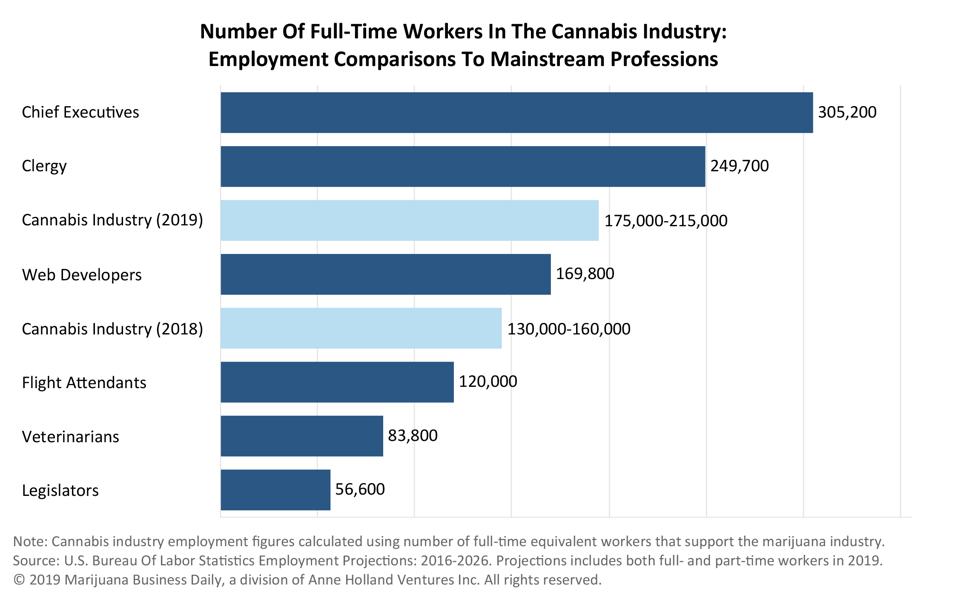 Jobs in Cannabis compared to other industries

One of the companies growing cannabis-related jobs is Colorado’s Wana Brands. Nancy Whiteman founder and chief executive of Wana Brands has been creating marijuana infused edibles since 2010 in California and last year sold more than $18 million worth of product. She employs about 90 people.

The company has a presence in seven states with plans to expand to seven more by the end of 2020.  With the legalization of hemp and demand growing there, the company recently announced it would launch “Wana Wellness,” hemp-derived CBD products, starting with gummies.