Patsy Copus makes batches of pot-infused gummy bears or cannabis-coated chocolate strawberries every few weeks to help with her arthritis and other medical conditions.

Although cannabis edibles are expected to be sold legally in stores in December, the Windsor, Ont., resident said buying them will likely be a financial struggle.

Health Canada has capped the amount of the psychoactive compound tetrahydrocannabinol (THC) allowed in food and drinks to 10 milligrams — a restriction Copus said wouldn’t meet the needs of some users.

„So for a person who has to take more of a higher dosage, that would be so expensive for them. They couldn’t even afford it,” said Copus, explaining cost is one of the reasons she makes her own edibles.

Edible regulations under Health Canada came into effect on Oct. 17 — a year after cannabis for recreational use became legal — but federal licence holders need to provide 60 days’ notice of their intent to sell any new product, which is why it will take until December for products to hit physical or virtual shelves. In addition to limiting THC content, rules surrounding cannabis edibles include requiring child-resistant packaging, no added nicotine or alcohol and limits on caffeine content.

„People approach me all the time [to buy cannabis edibles], but I tell them I’ll show them how to do it,” said Copus. „I’m an educator.”

Watch as Patsy Copus shows how she makes cannabis edibles:

Patsy Copus is a medical cannabis user and often makes her own edibles infused with marijuana. 1:59

Copus, who lives with multiple sclerosis and arthritis, grows cannabis plants for medical purposes. Making and baking cannabis edibles is like a science she’s taught herself over the years through research, as well as by attending cannabis events and speaking to people in the industry.

She’s learned, and cautions anyone who plans to create their own pot-infused foods, that „it’s very difficult to know how strong they are.”

„You go low and slow,” Copus said. „In other words, instead of eating all of these strawberries that I’m going to coat in the medicated chocolate, I’m going to have one. And I’m going to wait a couple of hours and see how I feel.”

Government caps on THC in recreational cannabis edibles „prevent overconsumption,” which Dr. Christopher Blue, a physician in Windsor, Ont., who prescribes pot to his patients, views as a necessary measure. 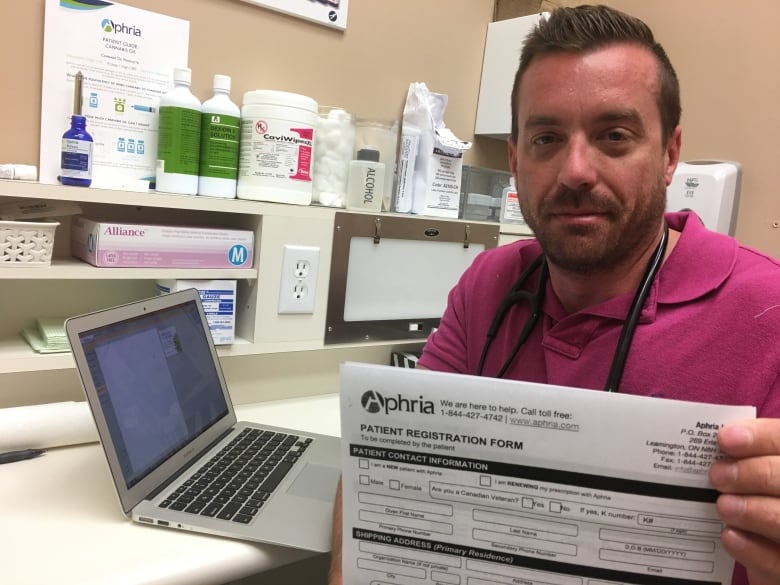 Dr. Christoper Blue says he’s not sure if he’ll be able to prescribe cannabis edibles created by a licensed producer when they go on the market in December. (Jason Viau/CBC)

„You go to some places in the states [where] you can go buy a cookie, and in that entire cookie will be 200 milligrams of THC, which is just a ridiculous amount,” said Blue.

’That’s a problem as a physician’

Cannabis is one of the only substances available for both medical and recreational use. Blue said that’s where things can sometimes get tricky, because people may self-medicate or consume more cannabis than they should.

„That’s a problem as a physician,” said Blue. „As physicians we always want to know if a patient is self-medicating.”

When it comes to prescribing cannabis to patients, Blue said it can range from 2.5 milligrams of THC up to 40 milligrams or 50 milligrams at one time. But that’s not the way a medical prescription for cannabis works.

„As a prescriber, we authorize up to a max amount that they’re allowed to purchase for medical reasons on a monthly basis,” said Blue, who can also prescribe a certain percentage of THC concentrate.

At this point, Blue said he’s unsure if he’ll be able to prescribe cannabis edibles created by a licensed producer when they are put on the market in December.