Canopy Growth may be headed to Toronto’s Mink Mile. A company spokesperson confirmed to BNN Bloomberg that the pot giant is in advanced negotiations with a cannabis retail licence applicant to open a Tokyo Smoke store at One Bloor Street East, located at one of the busiest intersections in the country. An updated list from the Alcohol and Gaming Commission of Ontario, the provincial regulator in charge of issuing cannabis retail licences, shows that 11180673 Canada Inc. changed its proposed store location to One Bloor Street East late Thursday. However, if Canopy Growth does open a Tokyo Smoke store at One Bloor Street East, it will have to spend heavily to do so. Leasing rates in Toronto’s Bloor-Yorkville area is Street is US$325 per square foot, one of the highest rates in North America, according to a recent report by Jones Lang LaSalle.

National Access Cannabis is going Meta. The cannabis retailer registered „Meta Growth” as a business name and will begin to conduct business under the Meta Growth name effective immediately, the company said on Friday. The change is subject to shareholder approval. NAC is also selling its portfolio of medical cannabis clinics to Evergreen Pacific Insurance for $4 million in cash which is expected to close by the end of the month.

Wayland Group updated shareholders on its previously announced “potential strategic transactions” late Thursday, stating its deal to sell its international assets to ICC International Cannabis is no longer happening. Wayland signed a deal with ICC back in April to sell 49.9 per cent of its international business, which includes assets in Germany and Switzerland, in exchange for 300 million shares of ICC. Wayland said it continues to be in discussions with Cryptologic, a cryptocurrency mining company, to sell its Canadian business. Wayland’s former CEO Ben Ward is among a group of three individuals charged by the Ontario Securities Commission for defrauding investors of more than $10 million.

$6.74
— The price of a gram of cannabis in Canada, down 3 per cent from the prior week, according to the Cannabis Benchmark’s Canada Cannabis Spot Index. This equates to US$2,331 per pound at current exchange rates. 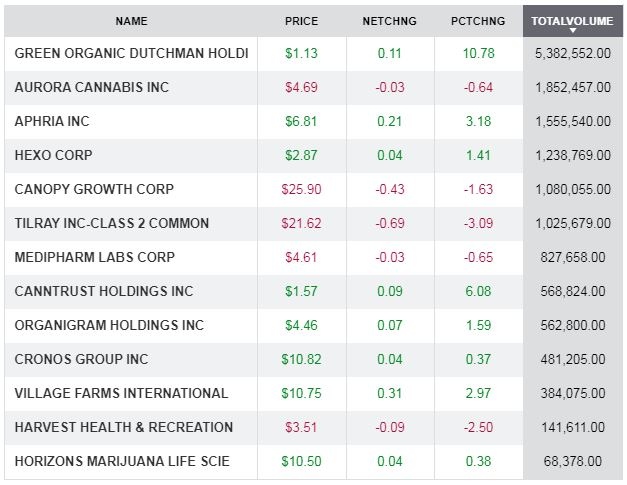