It was a tough week for cannabis, but a very good week for psychedelics and hemp. Four major cities took significant steps toward the decriminalization of psilocybin mushrooms and other psychedelic plants. Meanwhile, the United States Department of Agriculture released interim regulations for the production of hemp, opening a channel for the public to weigh in on them.

On the other hand, we saw a series of bad news coming out of major cannabis companies.

MedMen Enterprises Inc. (CSE: MMEN) (OTC: MMNFF) tumbled on a substantial growth in its net losses, which came in at $82.9 million for the fourth quarter, more than double the loss reported in the same period last year. Full-year revenue of $130 million, up by 227% year-over-year, hit a new record.

DionyMed Brands Inc (OTC: DYMEF) failed to restructure its debt or find a strategic buyer to acquire its assets, going into receivership. The company is in default of $24.81 million plus any additional interest, fees and expenses.

“It was a rough week for cannabis companies like MedMen, DionyMed and Hexo Corp,” Debra Borachardt, CEO of Green Market Report said. “MedMen lost control of its board, DionyMed is going bankrupt and HEXO has stumbled badly on projected revenues. It’s the cannabis industry version of The Real World.

“Companies are being forced to reckon with unrealistic and expensive business strategies and get real with the actual money coming in and what can be spent. Investors have shown their displeasure with pie in the sky plans and want real results now.”

International Cannabrands Inc. (CSE: JUJU)  requested a change of its ticker symbol on the Canadian Securities Exchange from JUJU to INCB. The effective date is expected to be Nov. 4. As announced Sept. 26, the company has discontinued its JuJu Royal brand.

“The change of symbol makes sense in the context of this business decision, as well as providing a more consistent recognition of the company as a whole, among public investors and stakeholders,” a spokesperson told Benzinga.

Cannabis company Harborside Inc. (CSE: HBOR) appointed Peter Bilodeau, the company’s chairman of the Board of Directors, as interim CEO replacing Andrew Berman. Additionally, the company announced Greg Sutton’s promotion to the company’s Chief Operating Officer of Cultivation and Manufacturing, and the addition of Lisah Poore as Chief Retail Officer. Mireille Duclos was placed to lead the company’s HR department.

“We grow the ingredients so manufacturers don’t have to,” Brian Moore, President of One World Pharma said. “As legalization matures and the big CPG players get into the game, the rules will change. We’re preparing for that future today.”

“I have been fortunate to have assembled a team of talented and experienced professionals that share a common vision of enabling medical cannabis access across Europe,” Anand told Benzinga.

According to a report released by RYAH Medtech, a big data and technology company focused on valuable predictive analysis in the global medical plant intake industry, women make up a large segment of the medical cannabis market—approximately 45% of the patient population.

RYAH surveyed over 28,000 women over the past 20 months on their use of medical cannabis and found that the average female patient prefers strains that are high in CBD and THC to treat many of the same ailments treated by men, including mental health issues and pain relief. The surveyed women’s top three medical concerns were anxiety, depression, and stress and they preferred Indica and Sativa strains equally across the range of condition treated.

RYAH’s data also confirmed that women are more likely than men to use cannabis for the specific treatment of fibromyalgia, nausea, anorexia, irritable bowel syndrome and migraines.

„I believe that cannabis legalization is a massive catalyst for change, offering powerful benefits for individual health and well-being in addition to an opportunity to foster broader social change and healing. At Aeon Botanika we want to build an ecosystem around cannabis and wellness, in a beautiful, inspiring environment,” Nicole Fox told Benzinga.

Cannabis 2.0: The Future of Investing in the Industry – conducted by FTI Consulting – spoke with 660 retail investors with at least $250,000 in investable assets. 90% of Americans and 82% of Canadians who are currently invested in cannabis believe they’re “completely on track” to achieve their financial goals despite the recent slump in markets.

“What’s really striking is just how confident investors remain despite recent headwinds,” said Sturges Karban, chief executive officer of ManifestSeven. “We’ve come through the first wide-ranging industry shakeout, and as companies such as ours prepare to go public, we are seeing investors acknowledge the importance of allowing compliant operators to mature, and lead the next phase of industry growth.”

BDS Analytics published a new report titled “From Dispensaries to Superstores: Opportunities in Cannabis Retail,” which explores the evolving purchasing patterns of cannabis consumers, the looming threat of large-scale retailers and breaks down the state of the current market.

“As the market continues to grow, we are seeing expanded opportunities for retailers to be active in the cannabis industry,” said Tom Adams, Managing Director of BDS Analytics. “Cannabis retail stores have changed dramatically in recent years, but public-equity capital and professional retailers entering the business will transform the landscape even more in the coming years. The connoisseur culture of cannabis suggests there will always be a place for single-store independents to survive, but the frequency of these types of stores is expected to decrease.” 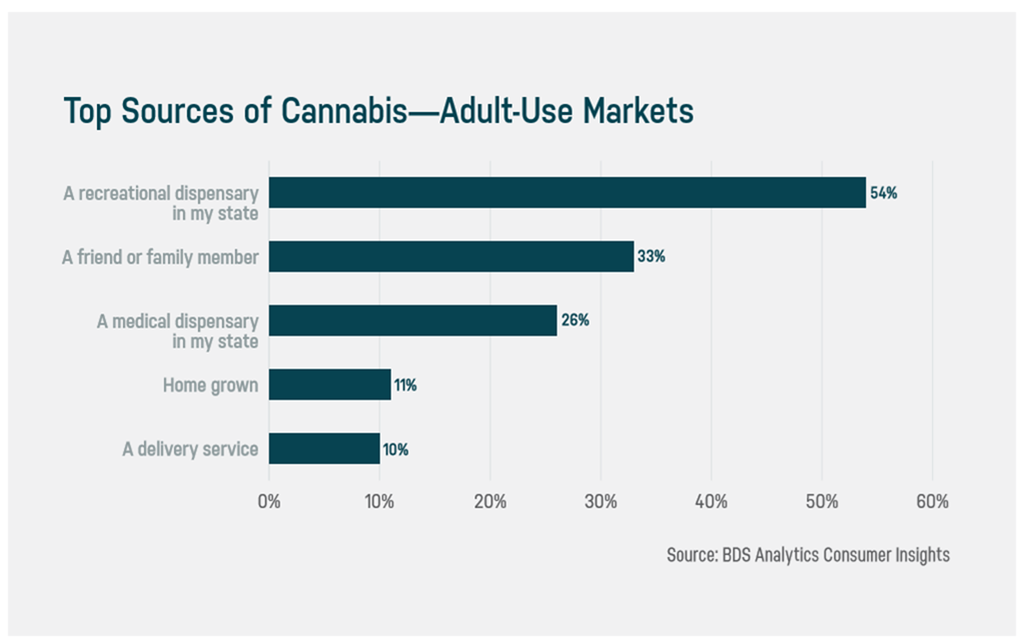 After providing data analysis services to companies like Starbucks and Groupon, location intelligence company GroundLevel Insights is now targeting the cannabis market launching a free beta trial for cannabis industry stakeholders in order to help them make well-informed business decisions. The information gathered and analyzed through the platform goes from consumer profile to time of purchase, to consumption patterns according to products, and more. Using AI to support data, GLI also track social media engagement and location listings. The company is inviting retail and medical clinics as well as licensed producers and service providers from the private and public sector to subscribe to the free trial.

“We realized that there was a lack of data analysis when it comes to cannabis. GLI is currently one of the only business providing location-based, customer data insight and recommendation solutions for the cannabis industry. We think there are tremendous opportunities to help these businesses grow as the market expands,” Asif Khan, Founder and CEO, told Benzinga.

Namaste Technologies (OTC: NXTTF) appointed Annie Holmes as Chief Financial Officer. As Principal of Chartered Course, Holmes provided strategic and financial advice to public and private clients in both domestic and international markets. She has held the CFO position within a number of private companies, as well as senior financial roles with publicly-traded Smart Employee Benefits Inc. and Katanga Mining Inc.

“The Production Facility offers an immersive experience to customers where they can watch and learn what goes into the creation of individual products,” said Bob Groesbeck, Co-CEO of Planet 13. “Interactive kiosks are available near the production viewing area to teach customers what goes into making their favorite product, offering Planet 13 a powerful branding opportunity.”

Carolina Hemp Company announced its expansion into five states in the United States. Along with North Carolina, the company is now expanding into South Carolina, Tennessee, Georgia and Ohio.

“We are thrilled to see so much interest from franchisees so quickly,” Founder Brian Bulman said. „I believe this proves our message resonates with people looking to get into the hemp space. The passion and intensity of our newest franchise partners is very refreshing

Santa Monica-based nootropics producer TruBrain is expanding into the CBD marketplace with a new product that combines its patent-pending smart drug formula with the increasingly popular hemp extract.

Headquarters (HQ), a Los Angeles-based company set out to solve a fundamental problem for international companies and brands looking to do business in California, has teamed up with Israel-based iCAN Israel-Cannabis to bring innovative cannabis companies from Israel to the US market, particularly California.

Nov. 5: Cannabis Europa Toronto: The Transatlantic Forum will facilitate transatlantic partnerships, bringing together key influencers and innovators from the world’s two largest cannabis markets. Held at the Fairmont Royal York Hotel, the event will showcase European knowledge and expertise to the operators and investors looking to access the European market.

Nov. 6: New York State Senator Liz Krueger collaborates with the NYS Society of CPAs to discuss the legislative and financial agendas for cannabis at their second annual Cannabis Conference at Baruch College. Aside from a keynote by Senator Krueger, the conference will host numerous panels of professionals discussing tax, operational, and legal challenges the cannabis industry is facing.

Nov. 7: The Leaders Summit, brought to you by Cannabis Europa, is an intimate and exclusive event for industry front-runners and pioneers in North America looking to gain a competitive edge within European markets. The Summit will take place at Manhattan’s members-only establishment, the Metropolitan Club, and aims to help investors navigate emerging cannabis markets and sectors with a focus on investment trends and commercial opportunities. „There’s a lot of uncertainty in the cannabis market at the moment and what we’re saying to North American businesses is: ‘Europe Is Open’. We’re bringing delegations from European governments and some of the largest European cannabis operators to show the range of business, investment and political opportunities that are forming across the Atlantic,” Alastair Moore, Co-Founder Cannabis Europa, told Benzinga.

Nov. 15-16: CBD Expo EAST will bring the largest CBD event platform to Orlando, FL to broadcast products with the community and share knowledge with the industry. The event features more than 150+ exhibitors, along with a substantial lineup of speaker presentations, panel discussions, demos and workshops from experts in the research, production, globalization, distribution and sale of CBD products. The theme for CBD Expo EAST will focus on globalization and spa + wellness.