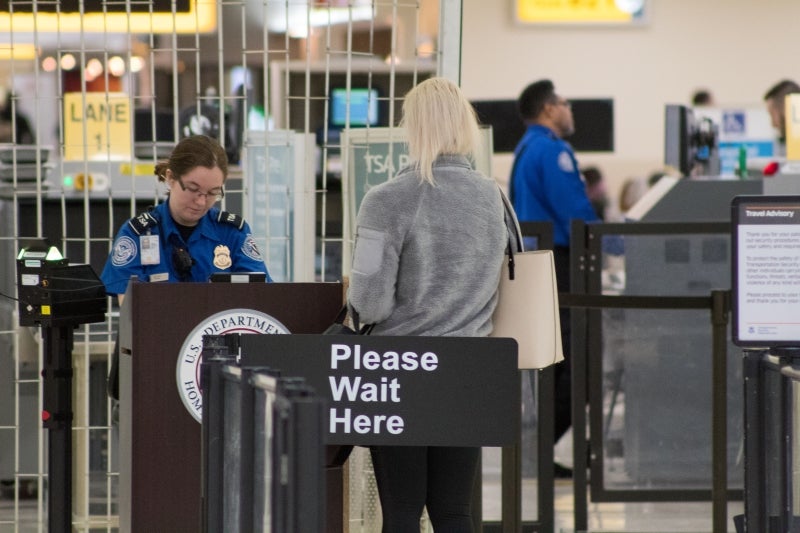 Although the TSA is required to flag cannabis or related products to law enforcement, the agency has made clear that marijuana is not its priority. Credit: Michael Ball 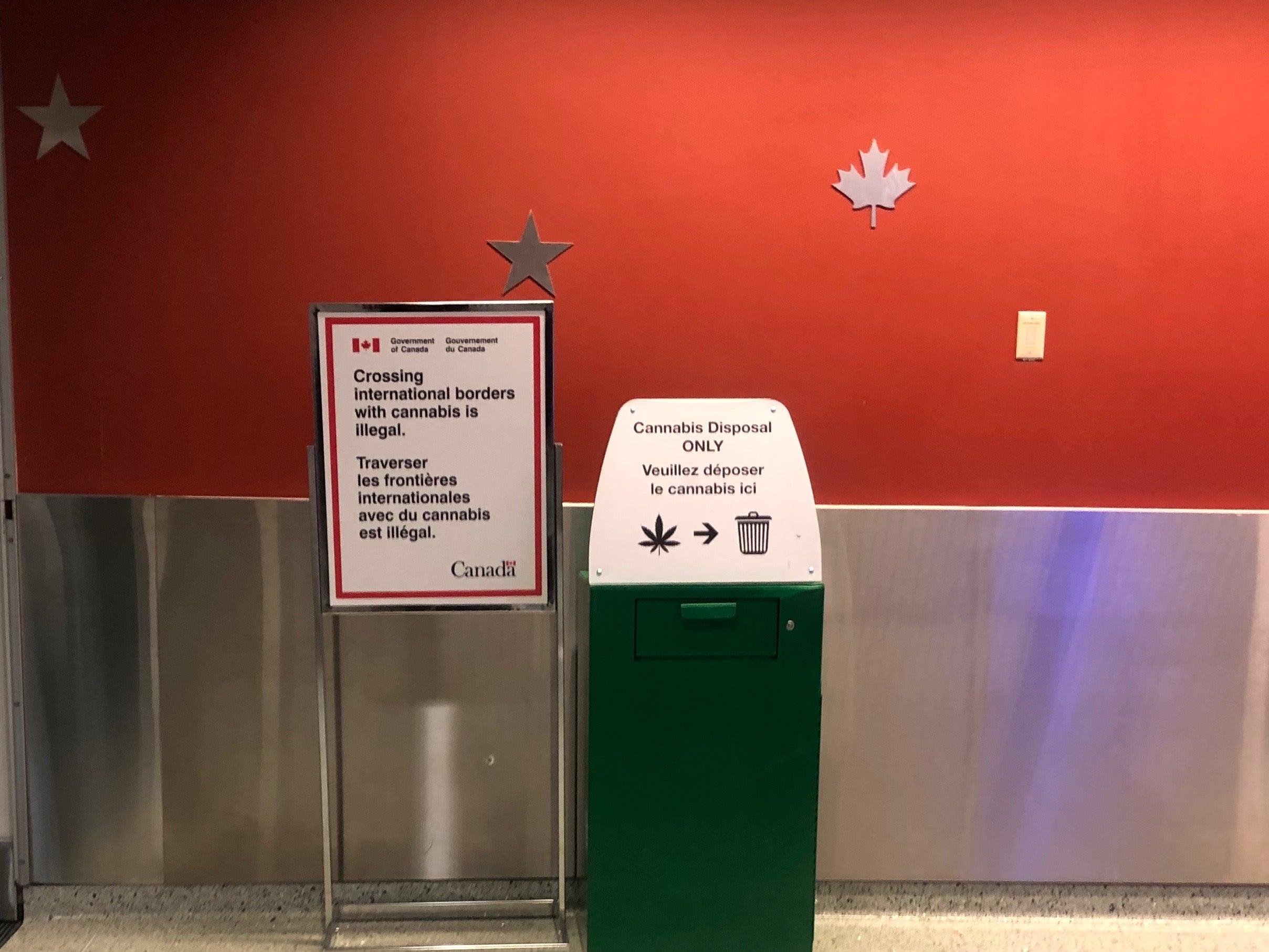 Travelling across international borders with cannabis is illegal, even if the origin and destination have both legalised the drug. Credit: Paulo O 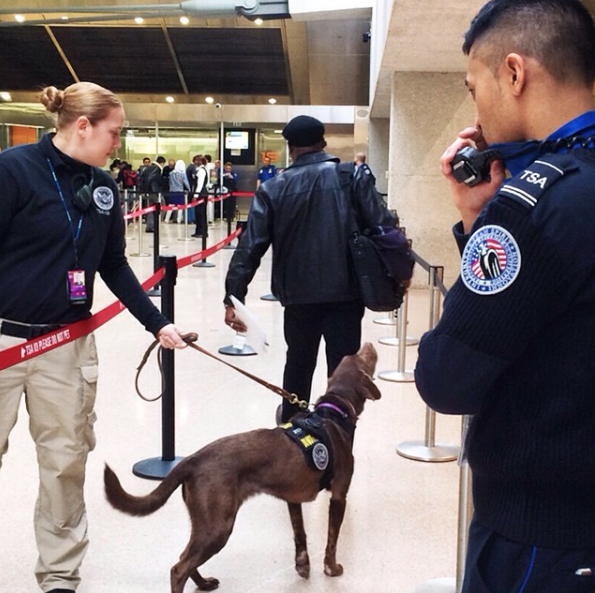 A TSA drug sniffing dog on patrol at a US airport.

Is cannabis legal in the US? Anyone even vaguely familiar with the topic knows this is a more complex question than it seems. Since California became the first state in the nation to legalise medical cannabis in 1996, a wave of marijuana legalisation – for recreational use as well as medical – has swept across the country. Colorado and Washington were the first two states to legalise recreational cannabis, and others have followed suit. Today, it is legal to use marijuana recreationally in ten states, and 33 states have legalised medical use of the drug.

While states are increasingly legalising or decriminalising pot, federal law still regards cannabis as a Schedule I drug under the Controlled Substances Act 1970, ranking it alongside heroin and psychedelic substances for its potential for abuse and addiction.

So, in many states the possession and sale of weed is legal locally but illegal federally, with federal agencies – for the most part – refraining from enforcing federal in states where the drug has been legalised. This awkward legal grey area has been causing problems between legalisation states and federal agencies such as the Drug Enforcement Administration (DEA); the California Bureau of Cannabis Control, for example, has banned the export of marijuana produced legally to any other state, partly to avoid conflict with the DEA.

In many ways, airports have found themselves on the front line in the confusing legal picture that has emerged around cannabis in the US. While airport police forces act according to state law, the Transportation Security Administration (TSA) is a federal agency, and US airspace is a federal jurisdiction, so airline policy is a blanket ban on carrying cannabis on flights.

“It’s a tangled web for sure,” Kaplan Kirsch & Rockwell attorney told Bloomberg in November 2018. “Airports are having to come to grips with this in a way that nobody expected a few years ago.”

As a federal agency, the TSA is required to flag any cannabis or cannabis-related products to local law enforcement. In an April Instagram post, the TSA was at pains to point out that cannabis is not its priority.

“Let us be blunt: TSA officers DO NOT search for marijuana or other illegal drugs,” the agency said. “Our screening procedures are focused on security and detecting potential threats. But in the event a substance appears to be marijuana or a cannabis-infused product, we’re required by federal law to notify law enforcement. This includes items that are used for medicinal purposes.”

It also includes cannabidiol (CBD), a non-psychoactive substance derived from cannabis and hemp plants. Like cannabis that contains THC (which provides the ‘high’), CBD products are commonly used for a range of conditions, are legal to buy in many states, and are still forbidden under federal law. Extra confusion around CBD products has been caused by the passage of the 2018 Farm Bill, which legalised the cultivation of hemp nationwide and set the stage for industrial-scale CBD production. It remains a controlled substance on the federal level, however.

Passenger confusion around the legality of CBD has seen related arrests and confiscations rising at some airports. At Dallas-Fort Worth International Airport in Texas, US Customs and Border Protection (CBP) port director Cleatus Hunt Jr told NBC5 Investigates that while CBD incidents were “almost non-existent” a year ago, in the last six months the interception rate has “skyrocketed”. Arrests related to CBD include the detainment of a 71-year-old woman on felony charges after being found with CBD oil she used for pain relief.

An awkward patchwork of airport policies

While the TSA is obliged to notify law enforcement if cannabis or derived products are discovered, what airport police actually do with that information depends on the state and the airport involved. US airports have a bewildering range of cannabis policies in their efforts to find a path through the drug’s conflicting legal status.

At McCarran International Airport and Denver International Airport, possession of cannabis on airport property is illegal despite possession of certain amounts of the drug being legal in their respective states of Nevada and Colorado. Taking this line “clears up any of that grey area or indecision,” McCarran spokesperson Christine Crews told Forbes.

Other airports are far more lenient. Los Angeles International Airport (LAX) allows passengers to carry up to 28.5g of cannabis, as they are permitted to do in California generally, and Seattle-Tacoma Airport has a similar policy. Portland International Airport allows passengers to carry marijuana with them if they’re flying within the state of Oregon.

Of course, even the most permissive airports also advise passengers that they must be aware of federal laws and the laws of the state they are travelling to, a complex task for anyone considering flying with weed.

Internationally, the picture is somewhat clearer, as unlike the TSA, CBP agents have arresting authority and can enforce federal law prohibiting carrying marijuana across international borders, even if the border is between northern neighbour Canada, which recently legalised the drug nationwide, and a US state where it is also legal.

In California, the legal complexities around cannabis appear to have given an unintended boost to illegal marijuana smuggling for sale on the black market. At LAX, authorities have reported not only an uptick in the number of passengers carrying marijuana for personal use, but a significant surge in large-scale cannabis trafficking through the airport.

According to a report by the Los Angeles Times, arrest records show that cannabis smuggling arrests have risen by 166% at the airport; in 2018, the year when the drug was legalised in California, LAX police made 101 trafficking arrests, compared to 38 the year before and 20 in 2016.

So given that marijuana is now legal to buy in California, what’s the reason behind this seemingly counter-intuitive wave of illegal trafficking across state lines? Again, the situation can partly be explained by the lop-sided legal status of cannabis across the country. After legalisation and the prodigious production of marijuana in California, the state is over-supplied, meaning the profit is to be found in other states where supply is scarcer.

California Cannabis Industry Association spokesperson Josh Drayton told the LA Times that a pound of cannabis worth $600-$800 would fetch around $4,000 in some Mid-Western states. With any export of cannabis across state lines still illegal, it seems an increasing number of Californians are willing to take the risk to reap the rewards of the black market.

“Since pot’s been legalised in California, there’s no money to be made because everyone got involved in it,” criminal defence lawyer and marijuana case specialist Bill Kroger JR told the LA Times. “They’ve got these big 50,000ft2 [grow] houses, and they’re flooding the market. The money is outside of California.”

The trafficking surge is obviously also a burden for destination airports. In June, three residents of Atlanta, Georgia, were arrested at Hartsfield-Jackson International Airport after finding 80lb of cannabis in their luggage, with an estimated street value of more than $500,000, on their return from California.

Some federal agencies have argued that this surge of illegal smuggling is a natural consequence of cannabis legalisation. While the wave of legalisation may well have played a role in emboldening passengers to carry large amounts of the drug through airports, the logic of this argument is flawed. The rise in weed smuggling can’t simply be pinned on legalisation; rather, it’s the result of weed’s legal limbo between state and federal law, and the fact that every state has taken its own individual attitude towards the drug is a recipe for confusion among passengers.

Recent poll data suggests that a large majority of Americans – and even a slim majority of Republicans and over-55s – support legalising cannabis at the federal level. A cohesive, nationwide approach to marijuana policy and enforcement could create more even markets, help wipe out black-market trading and certainly, from an airport perspective, put all passengers and authorities on the same page. The STATES Act, which would entirely hand over enforcement authority for marijuana to individual states, is currently being discussed in Congress. It would go some way to creating a clearer picture on cannabis, but as issues mount, only legislation at the federal level can truly put an end to the confusion surrounding legal cannabis at US airports.