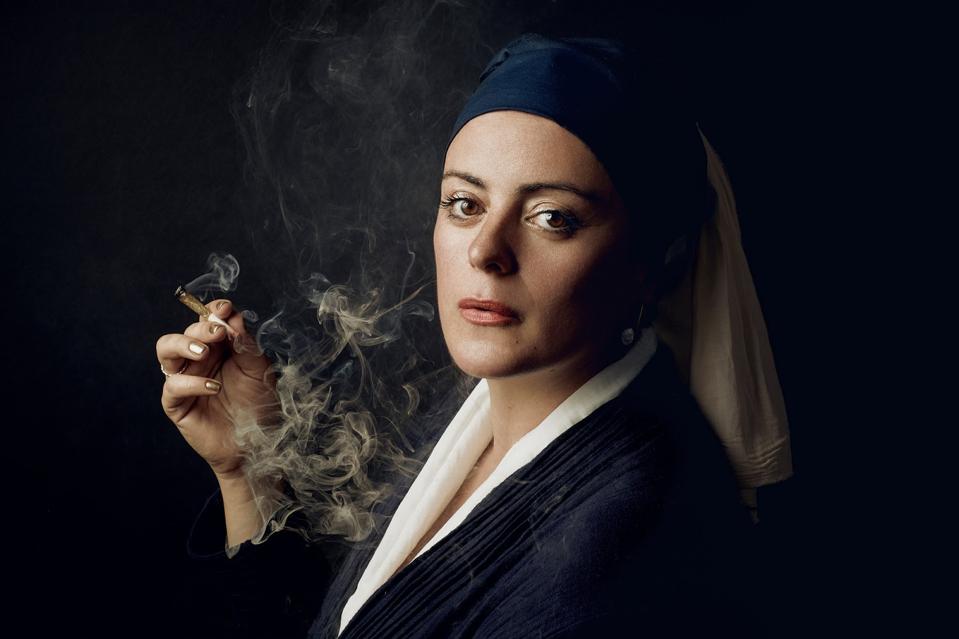 Oh, to be named Mary Jane and work in the legal cannabis industry! Melding life and ambition together in the aural metaphor, Mary Jane Gibson is lucky to have her name identify with our favorite plant— cannabis. Actress, writer and former lifestyle, entertainment and culture editor at High Times, Mary Jane has been traveling the world tracking the legalization of adult use cannabis and medical marijuana since 2007. She’s creative, and she certainly can write — be sure to check out her recent articles for Rolling Stone. She’s interviewed public figures, celebrities and industry experts for various outlets over the years and continues to do so on her famous podcast Weed+Grub, a must listen and subscribe. Complex Magazine has called her “one of the 15 most powerful women in the weed industry.” And, I do believe she’s one of the most intriguing, which is why I decided to ask her a few questions about her journey. 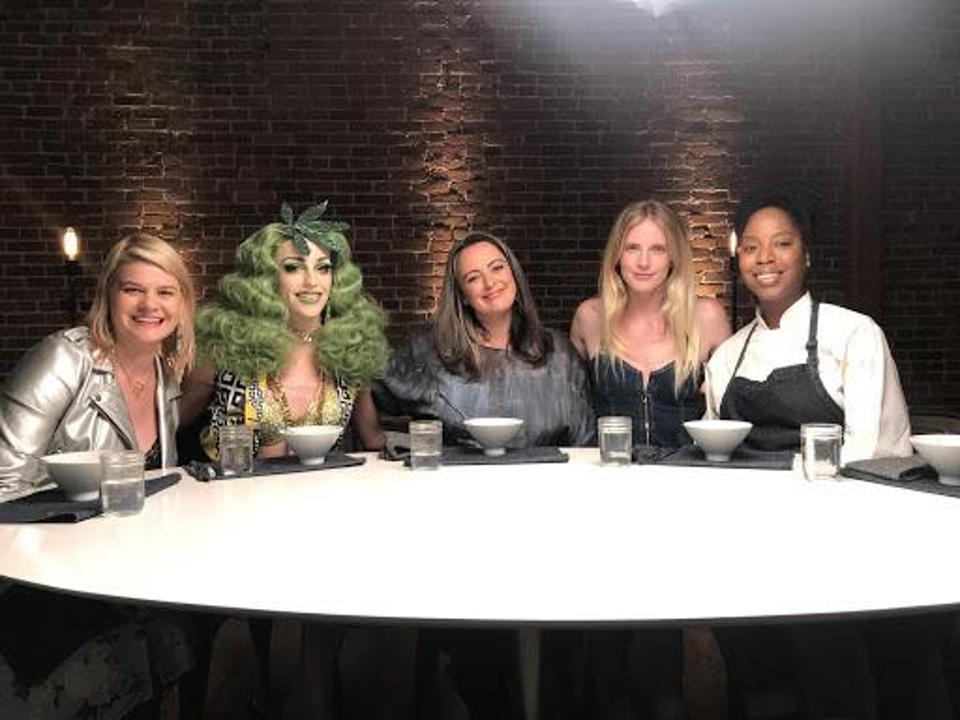 Warren Bobrow: What propelled you on this journey? Care to share some of the highlights so far?

Mary Jane Gibson: I met the High Times staff in 2004. They were the most interesting bunch of misfits I’d ever encountered, and they did everything together. I spent a weekend with them at a magical place in the Catskills called the Full Moon Lodge, smoking weed, eating mushrooms, and running around in the woods. I learned what a Volcano was. At that point, I’d been to Burning Man a couple of times, and I loved the chaotic counterculture of those gatherings. My new friends at High Times were outlaws, telling stories from the underground. There was real danger in reporting on weed in those days, and most of them wrote under assumed names. I fit in as Mary Jane — everyone assumed it was my pen name. (I was named for my great aunt.)

I started writing more for HT when Colorado and Washington legalized cannabis, and I caught the notice of Michael Kennedy, the legendary chairman and leader of High Times. He and his wife Eleanora, and the publisher, Mary McEvoy, envisioned me as High Times’ lifestyle writer. I’d found a niche, and worked hard to prove that I could write about cannabis as well as anyone else.

I was brought on as a full-time editor in 2014, and threw myself into reporting on the intersection of entertainment and cannabis culture. I drove to Atlantic City to interview Margaret Cho. That interview was beyond my wildest dreams — Margaret smoked out of the gorgeous peony-flowered bong I’d brought, and then draped herself across the bed in her luxury suite at the Borgata as we showered her with bud for the photo shoot. That night, I slept fully dressed on top of filthy bedclothes in a terrifying roadside motel. (Writer’s budgets, amirite?) Soon afterwards, I interviewed Awkwafina, who’d just dropped “Green Tea” with Margaret. I met Laura Jane Grace in an abandoned hovel in Bushwick for a hazy shoot. I smoked Peaches out in a loft in Bed-Stuy. It was an exciting time — the dawn of legal weed in America — and it was especially important to me to cover women and queer folx in cannabis culture. I’ve worked with incredible photographers and videographers to do so — check out Gretchen Robinette, Urs Mann, Lauren Hurt, and Kaitlin Parry.

Now I live in LA, and I write for several outlets, including Rolling Stone, Leafly, and DOPE. I’ve written about fake vape pens, cannabis legalization in my Canadian hometown, and Rick and Morty. I’ve interviewed Charlie Sheen, the Super Troopers, and Melissa Etheridge. I feel like I live in Weed Central — there are billboards, pop-ups, dinners and events on every corner. It’s a rich time, and I’m thrilled to chronicle it. I recently moderated a panel for Playboy on the destigmatization of cannabis — a dream come true!

My absolute favorite thing, however, is Weed+Grub, my podcast with Mike Glazer. We smoke, snack and swap tales with guests like David Crosby, Ron Funches, Buck Angel and Laganja Estranja, and it’s truly the best thing in the world. 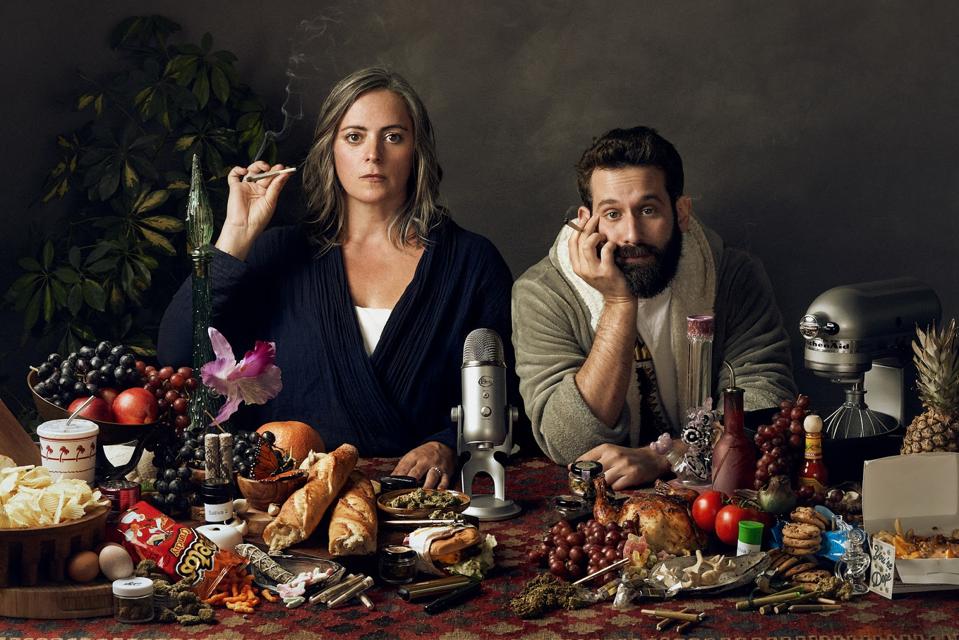 Spark up and chow down with Mike Glazer and Mary Jane as they smoke, snack, and swap tales about … [+] cannabis, comedy, sex, cooking, and pop culture on their podcast Weed+Grub.

WB: In addition to writing for some of the world’s most iconic publications and co-hosting your wildly popular Weed+Grub podcast with comedian Mike Glazer, I was excited to learn that you’re an award winning actress. What type of characters are you especially drawn to? Do you do much voiceover work (I hear many of your podcast listeners really enjoy listening to your voice)?

MJG: I relish playing unsavory characters the most. Broken, hungry, angry people. That’s where I can find a lot of truth and compassion. I graduated from The National Theatre School of Canada in Montreal, and then moved to Dublin with my dad, for what I thought would be a summer, and ended up being three and a half years in Europe. I did background on an Irish soap (shout out Fair City!), studied Beckett and Shakespeare with BADA at Oxford, and joined a theater group in Paris. Then I landed in Seattle, where I met my dear friend and collaborator Nicole Dufresne. We created a two-person show, Burning Cage, inspired by a book about CIA-funded brainwashing experiments in Canada. We toured it to several festivals and won Best of the Fest at the 2002 Seattle Fringe. I wrote and performed in another show, Anaphylaxis, that won Best of the Fest in Seattle in 2003. By then, Nicole had moved to the Big Apple, and I decided to pack up and join her.

My life was changed forever when Nicole was shot and killed on the Lower East Side of Manhattan in 2005. She was an amazing writer and performer, an incredible friend, and I miss her every day.

In New York, I met tons of wonderful actors and artists, and I was lucky enough to make theater with some of the most exciting folks on the scene: Reggie Watts, The Woodshed Collective, directors like May Adrales and Tony Speciale. I do all of Fatal Attraction in 10 minutes, and I love performing Chekov. I love everything about being onstage. Since I moved to LA, I’ve done some goofy character work — the Singing Potato has been booked on a bunch of stages around town (yep, I have a potato costume), and I did a play (which got great reviews) with Barker Room Rep. I’d love to do more voiceover work, and am always honing my chops on the podcast. Listeners write in with requests for me to read aloud: lobster linguine, juicy beef brisket… it’s really nice. If any companies out there want to hire a classically trained actor to read food copy in a sexy voice, please hit me up. 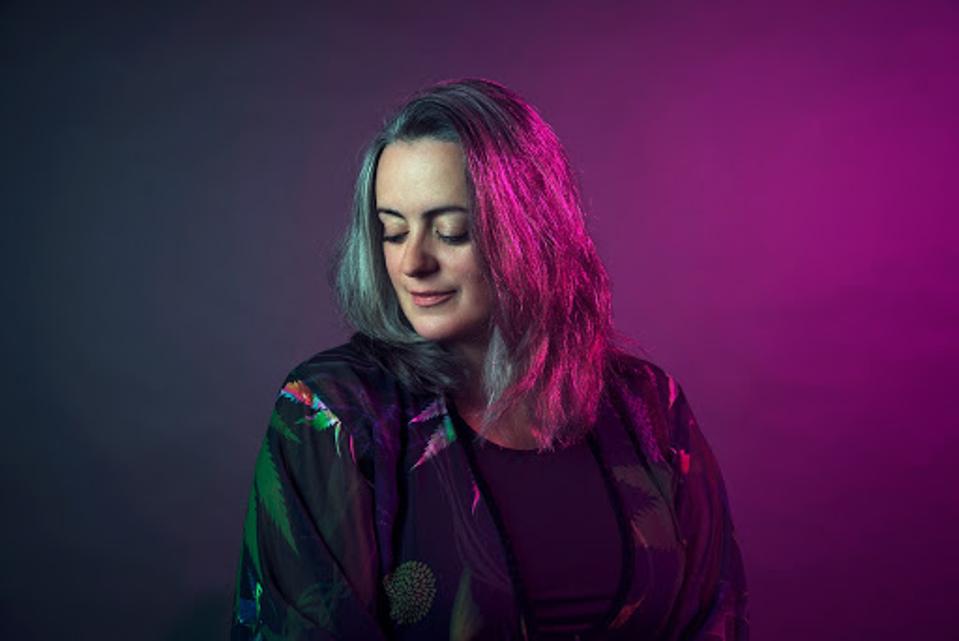 WB: Do you cook? If so, who taught you? Mother? Father? Television cooking shows? Anything that brings a tear to your eye when you eat/drink it? Why?

MJG: I grew up in Newfoundland, so the seafood was glorious, but the produce was awful. I’d never had an avocado until I moved to Montreal. My father loved Indian food, and any kind of strong flavor, really — we ate a lot of fried trout and mussels in my house. My mother makes a mean Welsh rarebit. My real fooducation (a word I’d use on Weed+Grub) came when I lived in Europe. I loved shopping for cèpes at the markets in Paris, and getting 2am curries in London. Then I spent four summers as a deckhand and cook on a salmon boat in Alaska, and I had to learn a lot, fast. I got good with a diesel stove and a knife. I can filet a king salmon pretty quickly. I survived going overboard when we were docking in Craig, AK, on a cold and rainy night. The next morning, I made pancakes and bacon for the crew, plus four dozen chocolate chip cookies, while we headed back out to sea.

My ideal thing to eat, any time, is a roast chicken (especially this recipe from the Barefoot Contessa). I’ll make it for dinner with friends, picnics in the park, or just for myself at home, to share with my dog Archie (a.k.a. Senator Ding Dong) and my cat Bobo (a.k.a. Mr. Juice). It’s always a comfort. 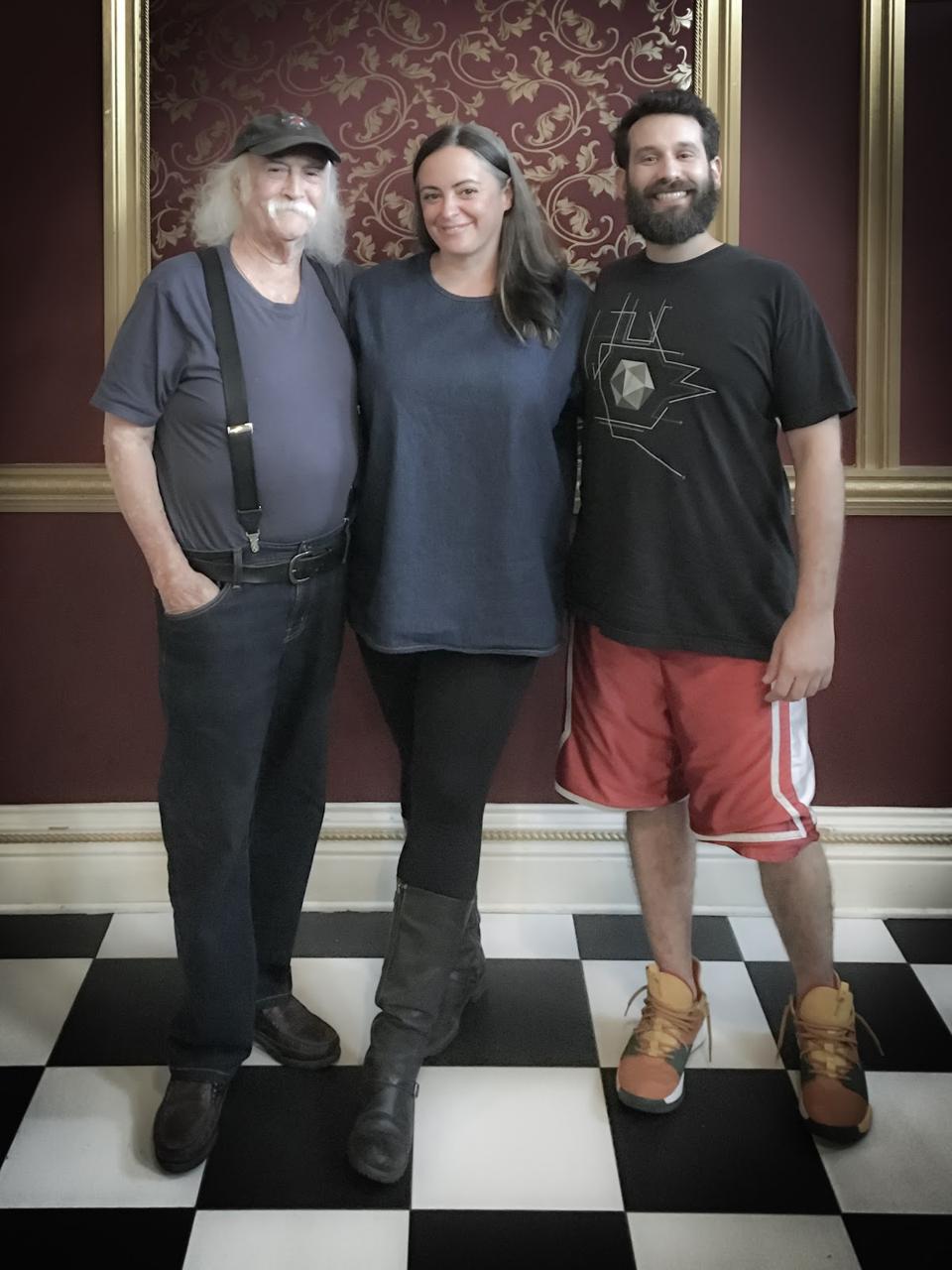 David Crosby sits down with Mike and Mary Jane before his sold-out show at LA’s Saban Theater for … [+] Weed+Grub.

WB: Where do you see yourself in a year? Ten years? When you were a kid, what did you want to be when you grew up?

MJG: In a year, I’ll have a couple of scripted shows (Ghost Coach, BUDS) in production with Big Fat Content, my company with Mike Glazer. I’ll be writing dark, funny stories for TV, and I’ll have my full-length performance piece, Sweet Action, ready to tour. I’ll be filing exciting stories about the coolest news in weed culture for the fantastic outlets I cover cannabis for. And I’ll be recording Weed+Grub with Mike, of course. We’re also working on a book of recipes and stories, which involves eating a lot of food and smoking a lot of weed (for research).

In ten years, I’ll have a compound where I grow my own weed and food and have legendary dinner parties.

When I was a kid, I wanted to be an actor and writer. Life’s taken some wild turns, but I’m right where I want to be.

WB: If you could be anywhere in the world, right now, where would that be? Doing what?

MJG: I’d be in Iceland, in a hot spring under the Northern Lights, eating buttered toast with cloudberry jam and smoking a fat joint with Mike and our guest Oliver Tree after we’ve recorded an episode of Weed+Grub, before we head to an all-night rave.