Shares of Canopy Growth plunged on Thursday after the company reported a weaker-than-expected $374.6 million net loss in its fiscal second-quarter. A lack of consumer interest in cannabis products led Canopy Growth, the world’s largest cannabis company, to report $47.9 million in charges, including a $15.9 million inventory write-down. Net revenue in the quarter totalled $76.6 million, compared with $23.3 million in the same quarter last year, but down from $90.5 million from the prior quarter. CEO Mark Zekulin attributed much of the company’s performance in the quarter to Ontario’s slow rollout of cannabis retail stores, pointing to the absence of available legal shops in the country’s biggest market that significantly weighed on the company’s revenue miss. Zekulin said he’s relayed his concerns to the Ontario government but acknowledged there’s been little follow-through on those discussions. “Why it’s not just happening right away, I do not know,” he told BNN Bloomberg.

Toronto-based The Green Organic Dutchman said it has signed arrangements for up to $103 million in funding which consists of a sale-leaseback of its Ancaster, Ont. facility, a construction mortgage loan term sheet; and a convertible equity note term sheet. The company said in a release on Thursday that its sale-leaseback will net TGOD $23 million in proceeds over a 10-year term after which it can repurchase the building from an infrastructure investor for $1. The commercial loan is valued at $40 million, negotiated with an unnamed investment fund, while it signed a deal with another unnamed investment fund for a US$30 million note with a five per cent coupon, convertible into common shares of the company. TGOD’s shares have been under pressure since October when the company disclosed it begun a review of financing alternatives after it was unable to find sources of new capital needed to help complete two growing facilities.

Zenabis Global reported a 52 per cent plunge in sequential quarterly revenue to $12 million after the Vancouver-based cannabis producer reported third-quarter results on Thursday. The company reported a $5.8 million loss in its quarter, better than the $18.5 million loss it booked in its prior three-month period, but still wider than the $2.1 million it lost in the same quarter a year earlier. Zenabis said it cultivated 5,239 kilograms of dried cannabis in the quarter, while selling 1,491 kilograms – a quarter-over-quarter decline of 13 per cent.

New Brunswick is looking to ditch its cannabis business and let the private-sector take over. The province’s finance minister Ernie Steeves told The Canadian Press that the move „was the best way to stop losing money at this point.” He added: „We are responsible for the taxpayers' money, and we have to be prudent with it.”. New Brunswick’s Crown-owned cannabis retailer recorded a $11.7 million loss in its first year in operation, while sales of legal cannabis totalled $18.6 million. CP reported that potential buyers will have until Jan. 10, 2020 to apply.

$2.74 billion
— The amount of cash, cash equivalents and marketable securities held by Canopy Growth after reporting its second-quarter results on Thursday. 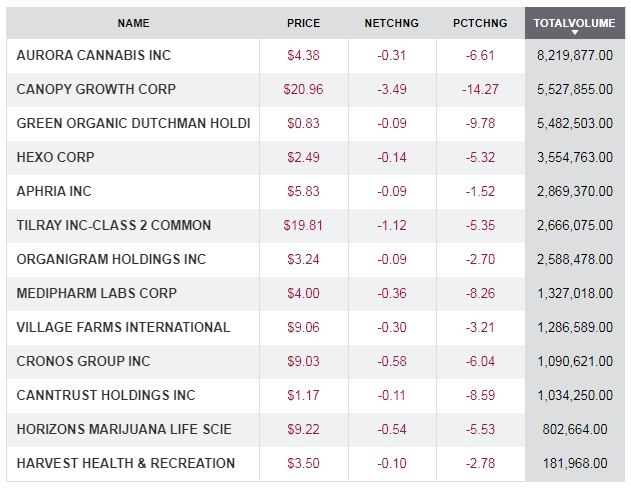 Is CBG better than CBD and THC for pain, inflammation, and aging? – Leafly

Police: Over 2 kilos of THC products seized during arrest in Greenwich – Middletown Press