FOX Business’ Lisa Kennedy Montgomery and Director of the Cato Institute’s Center for Global Liberty and Prosperity Ian Vasquez discuss the drug cartels in Mexico and ways they can be dismantled.

Four UPS workers and supervisors were among 11 people arrested over the past two weeks for their involvement in a Tucson, Arizona-based drug ring for about a decade, officials said.

The arrests came as part of a nearly two-year-long investigation by the Department of Homeland Security and Tucson Police Department after the two departments became aware of the possible involvement of UPS employees in the „sophisticated” scheme, The Wall Street Journal.

UPS is aware of the arrests and is cooperating with law enforcement but added that the company is not „at liberty to discuss the details of the arrests as this is an ongoing investigation,” according to a UPS spokesperson.

Authorities say the drug ring moved thousand-pound shipments of marijuana and other drugs each week from Mexico to Arizona and eventually the eastern part of the country in standard UPS cardboard boxes. Large amounts of money were then shipped back to Tucson, the Journal reported, citing an earlier report from The Washington Post.

Authorities also recently discovered nearly 50,000 cartridges of illicit THC vaping oil while raiding the home of Raul Garcia Cordova, 47, who was also involved in the smuggling operation, they said. The Centers for Disease Control and Prevention (CDC) found illicit THC oil to be the likely cause of a vaping-related lung disease that has killed 47 people so far in the U.S. this year as of Nov. 20.

„The vape pens that were confiscated are exactly the kind that the CDC warned about,” Counter Narcotics Alliance Commander and Tucson PD Cpt. John Leavitt told the Tuscon Sentinel. „They are the pens that are likely implicated in the death and illnesses related to THC cartridges across the country.”

The alleged ringleader of the operation, Mario Barcelo, was a UPS employee and dispatch supervisor for 20 years. Police have been on the hunt for Barcelo since 2009, though the investigation was not formalized until 2017, The Washington Post reported, citing authorities.

Detectives were reportedly frustrated that UPS did not work more „proactively” with Tucson law enforcement to catch the criminals, Tuscon Police Sgt. William Kaderly said, citing a 2017 incident in which police were not permitted entry into a Tucson facility to investigate an illicit package, according to the Post.

Three other UPS employees, including supervisor Gary Love and drivers Michael Castro and Thomas Mendoza, have been charged with money laundering, drug possession and drug distribution. 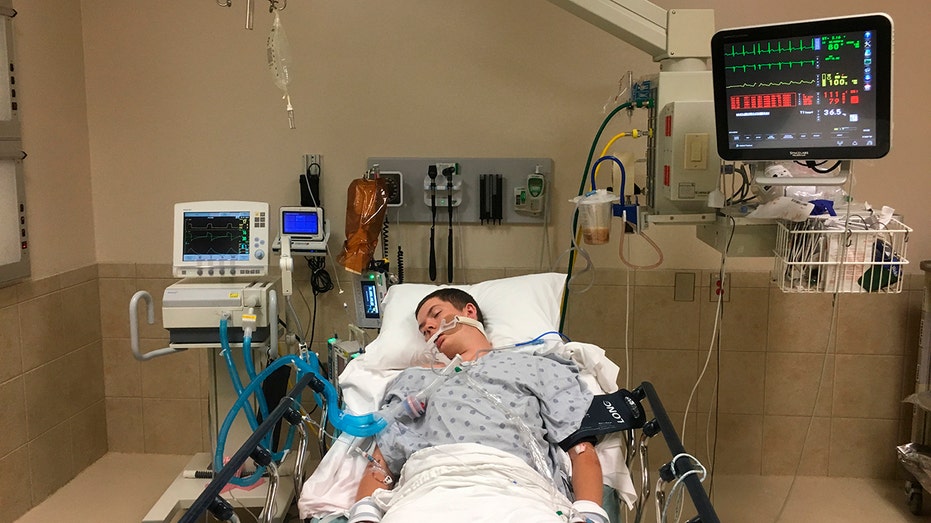 Jay Jenkins suffered acute respiratory failure and drifted into a coma, according to his medical records, after he says he vaped a product labeled as a smokable form of the cannabis extract CBD. (Joseph Jenkins via AP)

„The larger implication of the investigation is that any product, guns, drugs or WMDs could have been shipped across the country by these criminals,” Leavitt said, according to the Sentinel. „They had no standards as to what could be shipped.”

„Many drug trafficking organizations have exploited this vulnerability over the past decade. Drugs of all types have been shipped,” he added. „Taking them out is a major blow to traffickers. They will be forced to [use] other avenues that put them at greater risk.”