What keeps Aurora Cannabis CEO Terry Booth up at night? Aside from his seven-month-old daughter, Booth can’t help but shake his company’s stock performance as of late. “As the CEO, you really want to know how the market is differentiating us,” he said in a rare, wide-ranging interview with BNN Bloomberg. While Aurora’s stock has indeed suffered, trading down 51 per cent over the past year, Booth continues to remain optimistic on the company’s prospects. He highlighted how the U.S. remains a crucial market for its CBD product ambitions, and reiterated a firm focus on governance and managing its finances to retain investor confidence in an industry beset by steep losses. Booth said the company is planning to re-enter the U.S. market, but declined to provide a firm timeline. He also warned that the Canadian cannabis industry will soon see “carnage” among some companies that have high production costs per gram of pot grown, while others will struggle to survive in the current downturn.

What’s exactly in your cannabis? Global News reports testing conducted by Health Canada found roughly 95 per cent of licensed cannabis producer samples came back negative for pesticides shortly after legalization last year. Global News, which obtained the figures from filing access-to-information requests, said the country’s cannabis regulator conducted 133 tests between November 2018 and February 2019 during which five samples tested positive for restricted pesticides. Of those samples, four were found to be within acceptable limits for metalaxyl, a fungicide. Health Canada didn’t list the names of the licensed producer samples, Global reports.

WeedMD reported third-quarter financial results late Friday, with revenue coming in at $6.7 million and an adjusted EBITDA loss of $1.9 million in the three-month period. The company’s results, which were delayed by a day, also showed a 16 per cent sequential decline in revenue, which missed analyst expectations. Shares of WeedMD resumed trading after a day-long halt and fell more than 20 per cent on the TSX Venture Exchange. The Toronto-based company also reported that it acquired medical cannabis provider Starseed Holdings in an all-stock deal valued at $78 million while also receiving a $25 million equity investment from the Labourers’ Pension Fund of Central and Eastern Canada. WeedMD will also be the union’s exclusive provider of medical cannabis. Lastly, the company disclosed its outdoor harvest grow figures, stating it yielded more than 8,000 kilograms of cannabis at a cash cost of 16 cents a gram.

The U.S. Drug Enforcement Administration authorized 3,200 kilograms of cannabis for medical research use in 2020, according to Marijuana Moment. The website reports that the new research quota, up 30 per cent from last year, was finalized after a three-month-long public notice period that garnered hundreds of submissions from the public and government officials. However, there remains just one federally authorized marijuana cultivation facility, a farm at the University of Mississippi. As well, research-grade cannabis, with lower THC concentrations, apparently differs substantially than similar products available in the recreational market, the website reports.

The recreational cannabis market is set to kick off this Sunday in Michigan with the Great Lakes State standing to net more than US$1 billion in sales in the next fiscal year, according to state budget planners. However, MLive reports that the state’s tax coffers may not necessarily fill up given that about 1,400 of Michigan’s 1,773 cities and villages opted out of allowing recreational marijuana business in their jurisdiction. As well, a handful of stores will be open at 10 a.m. local time on Dec. 1. The state’s marijuana regulatory body allows Michigan’s medical cannabis dispensaries to relabel up to 50 per cent of their product that had been in inventory for 30 days or more for recreational sales.

The price of a gram of cannabis in Canada, down 0.8 per cent from the prior week, according to the Cannabis Benchmark’s Canada Cannabis Spot Index. This equates to US$2,177 per pound at current exchange rates. 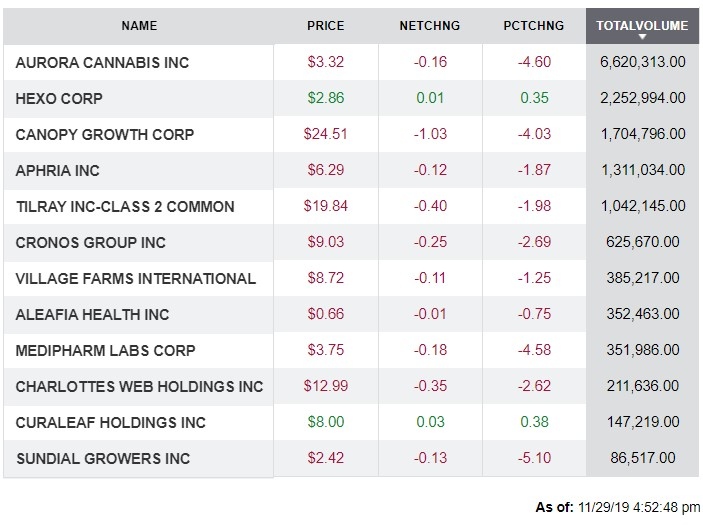