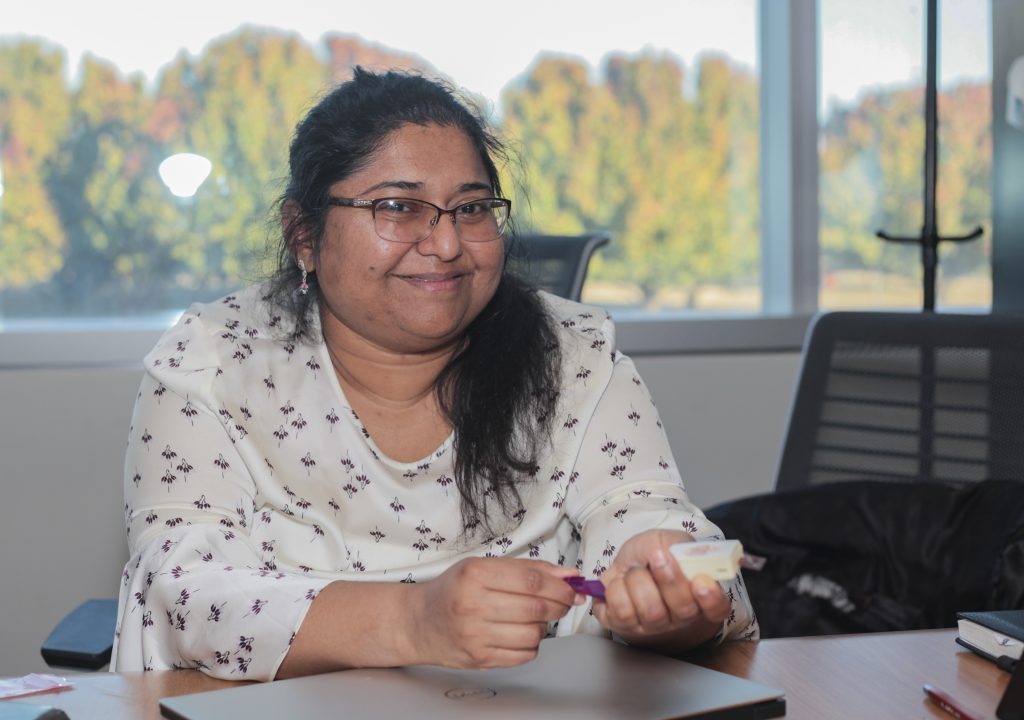 A team of UTD researchers has developed a sensor to test tetrahydrocannabinol levels in saliva. THC is the main psychoactive compound in marijuana that induces a “high” in users.

“(It) can be used for primarily the ability to accurately quantify the amount of THC that’s present, which then correlates the amount of cannabis that was consumed by an individual, so that is the entire idea of building an objective measurement method,” Prasad said.

In addition to its measuring capabilities, Prasad said the device will have a wide range of uses.

“From our perspective, we want to use it in the context of clinical studies where (marijuana) is prescribed for a number of conditions, whether it’s in cancer research or other forms of managing conditions. That would be the way we see this, as a tool to understand how much is getting consumed by the patient and whether it is within a therapeutic index or not,” Prasad said. “It can also then be leveraged and used in places such as in law enforcement, but we cannot set the standard on that. That has to be done by governments and by organizations outside. We’re just building a measurement test.”

Prasad said the sensor detects the THC molecule in a person’s saliva to measure the concentration consumed.

“You have a little swab and you swab your saliva, get the saliva on to the sensor, and you stick that sensor into a reader, which is kind of like a USB port. Then that reader then looks for the molecule,” Prasad said. “Because the surface of the sensor is engineered with receptors for the metabolite THC, (it) pulls it, captures it and there’s a current that ends up getting produced because of this capture. This current is then converted into a concentration, and that concentration is then reported in an objective manner.”

The sensor was developed over a period of five years. Electrical engineering Ph.D. student Devang Sankhala, who helped develop the device, said the sensor was designed by former UTD graduate student Hunter Stevenson.

“Before we took over the project, we had another Ph.D. student (who) started off with designing this sensor,” Sankhala said.

Sankhala said one of the challenges in developing the sensor was perfecting a way to accurately test for the THC.

“If we talk about challenges, after really getting the analog at hand, the second one would be, trying to get it right. Trying to get that right, takes around six to eight months easily,” Sankhala said. “After that, I think we started off with a study where we procured human samples.  We asked volunteers to provide the human saliva sample.”

Another of the challenges Prasad said, was using saliva as a medium.

“Saliva is a bunch of other things, right? Saliva pH changes based on what we eat,” Prasad said. “Both of these will impact whether your measure is accurate, as well as whether it’s sensitive enough.”