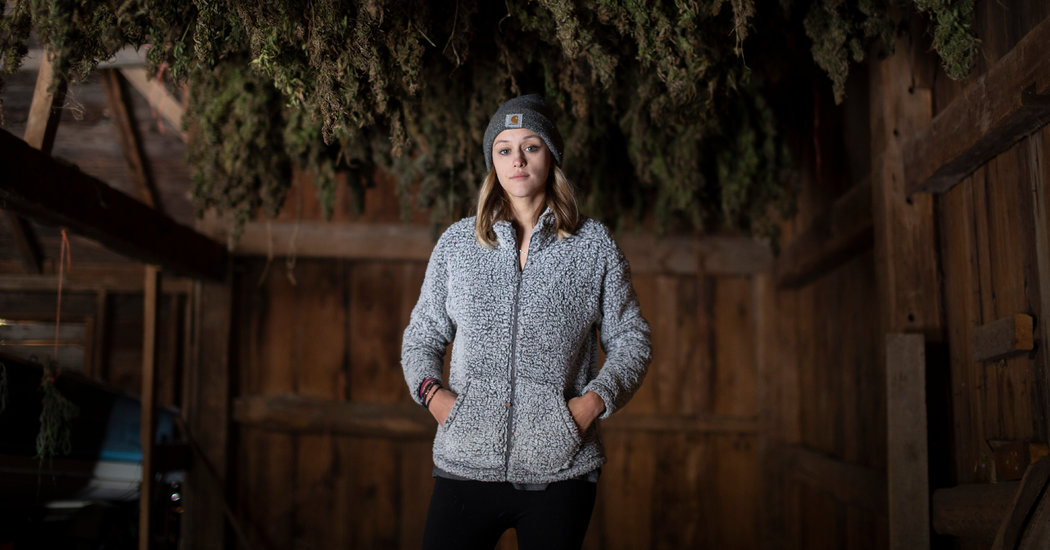 SALEM, N.Y. — She planted her spring crops at the family farm, following the same steps as her ancestors did as they farmed the land for seven generations. She tilled the soil, sowed the seeds, irrigated the earth and waited for the bushy green hemp plants to sprout.

Then Iris Rogers did something her farmer forebears never had to do: She put up warning signs.

“Not marijuana,” it reads. “Will not get you high.”

In the nearly two years since New York State began widely authorizing farmers to grow hemp, farmers like Ms. Rogers have had to go to unusual lengths to protect their crops because so many people — from thieves to law enforcement officials — mistake hemp for marijuana.

The two cannabis plants look and smell alike, but hemp has a far lower concentration of THC, or tetrahydrocannabinol, the psychoactive component, than marijuana.

Police officers around the nation have announced large-scale marijuana busts, only to find out later that the “drug” haul was actually hemp. Even drug-sniffing dogs, said Erica Stark, the executive director of the National Hemp Association, react to hemp just as they do to marijuana. “It’s a mess,” she said.

Then there are the thieves intent on stealing it, either to deal it or smoke it themselves — sometimes doing so straight from the fields. Hemp farmers have spent fraught harvests hiding surveillance cameras among the stalks, sleeping in the fields with shotguns, or waking up to empty holes where their hemp plants once grew.

After one nighttime theft at Ms. Rogers’s Old Homestead farm in upstate New York, she immediately acquired an alarm of sorts: Its name is Asher, a cattle dog who yips at any rustle in fields.

“It is so stressful,” Ms. Rogers, 26, said. “It really is the kind of thing only for people with strong willpower, strong stomachs and the ability to stay positive.”

This year is only the second hemp harvest in the United States since President Trump signed legislation legalizing its cultivation and turning oversight of the crop to the states. Hemp cultivation had been stymied since 1937, when a law designed to thwart it levied harsh taxes on its trade; it was then officially criminalized by a 1970 federal law.

The change in hemp’s legal status coincided with an explosive demand for cannabidiol, or CBD, a hemp extract and a purported panacea for pain and anxiety that is put in everything from creams and tinctures to food and drink.

Nearly 300,000 acres of industrial hemp were planted nationwide this year, more than triple the amount in 2018, according to data collected by the Brightfield Group, a market research firm that studies the cannabis industry.

While New York State has authorized a small amount of research farms to grow hemp since 2015 as part of a pilot program, the cap was lifted in 2017 and the program expanded to include additional farmers. Today, according to the state’s Department of Agriculture and Markets, which runs the program, over 600 people are approved to grow and process the plant on 24,000 acres statewide.

And then they deal with the drama.

Some farmers wake up to a field of decapitated plants — hemp flower, the top of the stalk that is rich with the resin that contains CBD, is newly emerging as a smokable stress reliever and can sell for $3 to $40 a pound dependent on cannabidiol percentage, according to several farmers. The surgical precision of such cuts, growers say, means those thieves know exactly what they are stealing.

At HempChain Farms in Berlin, N.Y., near the state’s border with Vermont and Massachusetts, the police investigated a report of trespassers after Owen Martinetti, the 24-year-old chief executive of the farm, said huge chunks of hemp plants were cut down.

A few days later, Mr. Martinetti said, the police found posts on social media by two men who were gloating about what they believed was an illicit haul of marijuana and their attempts to sell it.

“They were trying to pass it off with marijuana to people, because visually you can’t tell,” he said.

There was even an instance when intruders were caught on camera making several clandestine visits to a farm in Warwick, N.Y., to tend to actual marijuana plants that they had hidden among the hemp plants.

“They would come through in a full camouflage, complete with a spray wand and tanks,” said Bruce Ludovicy, 49, who runs Hudson Valley Biomass Processors, a hemp-growing consortium that includes the Warwick farm.

More frequent are the examples where law enforcement is confused.

Earlier this month, the New York City Police Department trumpeted a bust of 106 pounds of marijuana “destined for our city streets,” and arrested a man, Ronen Levy, on suspicion of possessing a controlled substance, a felony.

Mr. Levy was, in fact, picking up the load for his brother’s company, Green Angel CBD, according to Oren Levy, his brother. “He was in shock. They treated him like a criminal,” he said.

The Brooklyn district attorney’s office said the charges against Mr. Levy would be dropped.

The misunderstandings can lead to frightening encounters. Jim Castetter found himself surrounded by state troopers as he loaded bales of hemp onto a truck at the edge of their farm in Canandaigua, N.Y., said his son, Kaelan Castetter, 23, a co-founder of the New York Cannabis Growers and Processors Association.

“It took about two hours to explain that no, we are not loading the largest quantity of marijuana that the county had ever seen on the side of the road in broad daylight,” he said.

That incident led the family to invite the local police to its hemp-drying facility in Binghamton for a tour this year, Kaelan Castetter said, hoping to combat confusion with education. His interactions with the police have since been largely positive. “They understand the direction that the state and the country is moving in,” he said.

Many law enforcement officials have been hindered by their inability to properly test hemp plants; most still use tests that can often detect only the presence of THC, not its level of toxicity.

In Texas, confounded by the lack of testing equipment, prosecutors began dropping some marijuana charges over the summer, unsure what substance they were dealing with.

“Ensuring law enforcement can differentiate between industrial hemp and its illicit cousin is critical,” Senator Mitch McConnell, the Republican majority leader from Kentucky, said in September when he added language to a 2020 Senate appropriations bill directing the Drug Enforcement Administration to come up with technology that can distinguish between the two types of plants.

Further complicating things is a quirk in the chemistry of hemp plants that can cause them to overproduce THC when stressed by things like a lack of irrigation. The New York State Department of Environmental Control tests each hemp field to see if it has “gone hot,” as the phenomenon is called.

Mr. Ludovicy, the hemp consortium leader, said one of his group’s farms was forced to destroy 2,000 pounds of this year’s harvest after a field tested hot. He said it was a $10,000 loss.

Those losses can greatly affect a farm’s profit margins, especially with some having recently spent thousands of dollars for towering fences and high-tech alarm systems more typically found on actual marijuana farms in places like California and Colorado.

There are other market forces at play: As more farmers have joined the hemp rush, the glut of product has seen the price per pound fall precipitously, and it stands to dip further as more farms sign up for the 2020 growing season.

The challenges and growing pains of the nascent industry have complicated Ms. Rogers’s dreams of resurrecting the Old Homestead, which the Rogers clan stopped using as a commercial farm in 1967. It had remained a hobby farm for the family.

“This is our future,” said Ms. Rogers, as she stood beneath a canopy of drying hemp stalks in her roughly 300-year-old barn, her dog Asher running between her legs. “This has to work.”