The grower, processor and vendor of cannabis products estimates that use of the substance will quintuple to reach 55 per cent of US adults within a decade, a similar proportion to alcohol. The company’s investment presentation, featuring slides of verdant grow houses and dispensaries with the burnished woodwork of an expensive coffee shop, pictures an American market growing to more than $200bn in annual sales — a heady projection.

But investors have lost the buzz in recent months. Shares of iAnthus have dropped almost 80 per cent from a peak in March, after climbing almost 150 per cent in the 12 months prior.

“When stocks run up there’s always this irrational exuberance on the upside. There seems to be an irrational downside as well,” said Hadley Ford, iAnthus’s co-founder and chief executive. “Obviously, the entire sector is just wildly oversold.”

The cannabis sector is shaping up to be one of the great market busts of 2019. An exchange-traded fund tracking shares of pot companies, known by the ticker MJ, has collapsed by almost a third this year.

What seemed like unstoppable momentum towards pot legalisation in the US has slowed down. The number of states that have approved full “recreational” use by adults has reached 11. But big northeastern markets such as New York, New Jersey and Connecticut have not passed bills allowing it. 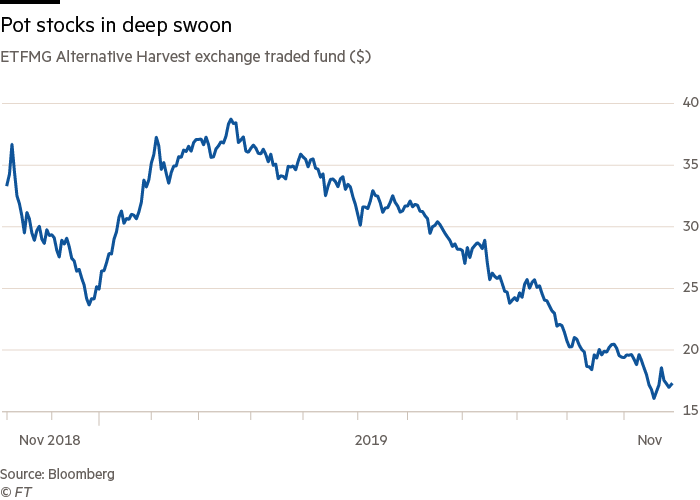 Canada, the first G-7 country to legalise cannabis last year, has struggled to coax smokers away from the cheap buds sold by street dealers. A 400-tonne surplus sits in warehouses. A string of illnesses related to vaping — popular with cannabis as well as nicotine users — has also shaken confidence in the sector. Broker Cowen said the growth of the industry had been “more incremental than exponential during 2019”.

Al Foreman, chief investment officer of Tuatara Capital, a cannabis-focused private equity firm, compares the nascent industry to the tech sector. Both are driven by fast-growing start-up companies that need to surmount regulatory barriers, with some struggling to maintain investor interest once they reached public markets.

“I think the market correction that we’re seeing is really a reflection of the market having gone too far, too fast with respect to rosy, blue-sky optimism,” Mr Foreman said.

Cannabis stocks have been popular with millennials, who are also “the most significant demographic group in terms of consumption as well as support for legalisation,” according to Aite Group, a consultancy.

But the stocks are difficult to trade. Because pot is illegal under US federal law, many conventional Wall Street brokers restrict retail investors from buying cannabis stocks, in some cases sending back error messages, Aite’s Greg O’Gara said. 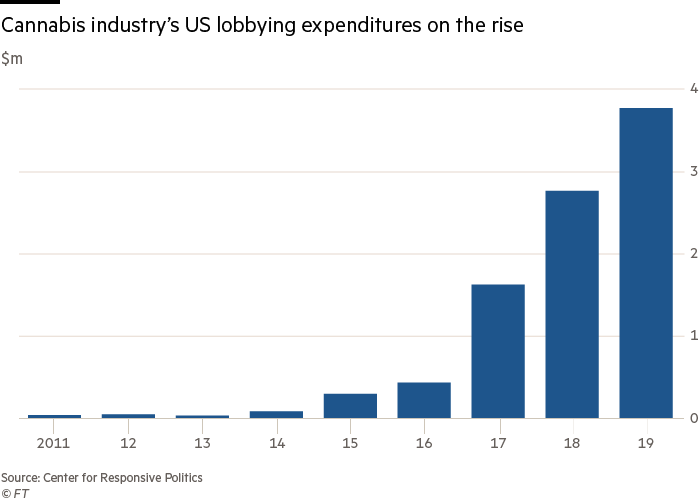 Canadian producers such as Canopy Growth and Tilray have a US listing. Yet the New York Stock Exchange and Nasdaq will not list US companies that “touch the plant,” said Mr O’Gara, forcing these operators — including iAnthus — to list in Canada. The US ban also keeps bigger banks from lending to companies, forcing them to issue more equity capital at low share prices.

Seeking to lift constraints, the marijuana industry has spent $3.8m on federal lobbying in the nine months to September, according to the Center for Responsive Politics. That is up from $2.8m in the whole of 2018. “We’ve invested a lot of resources into really making a push during this session of Congress to have significant changes,” said Steve Fox, strategic adviser to the Cannabis Trade Federation.

The industry has had some successes. In September the House of Representatives passed the Safe Banking Act, which would stop federal banking regulators from penalising banks that lend to legitimate cannabis companies. Last month, the House judiciary committee advanced the More Act, a bill to decriminalise pot at the federal level. The 24-10 vote was supported by 22 Democrats and two Republicans.

Some companies are preparing for a nationwide market. Cannabis One sells branded pot including Cheech’s Private Stash, a name licensed from Cheech Marin of the 1970s stoner movie duo Cheech & Chong. “He’s pretty actively involved in the thought leadership, if you will,” said Jeff Mascio, Cannabis One chief executive.

If the federal government were to legalise pot, the company would be able to more broadly sell Cheech’s and other products from three centralised manufacturing plants. “We will be able to scale those up and distribute to the entire country,” Mr Mascio said.

But a divided Congress is unlikely to pass a total legalisation bill until 2021 at the earliest, industry executives think. Mr Ford of iAnthus said federal legalisation would bring in more investors and cushion market swings, but he doubts it will happen in the current term.

“No one wants to be accused of working with the other side. That’s the only way legislation happens,” he said. “The big irony here is that cannabis is one of those few issues that has majority of votes on both sides of the aisle.”