A facility operated by Vancouver-based Zenabis Global failed an inspection to receive a key European Union certification last year, hindering the cannabis producer’s ability to ship medical cannabis to the continent. Regulators in Malta published a „statement of non-compliance with GMP [good manufacturing practice]” against Zenabis on Nov. 27. The statement determined that an inspection conducted on Dec. 16, 2018 at the company’s facility in Delta, B.C. did not comply with the EU’s GMP requirements. In prior security filings, Zenabis reported it had big plans for its medical cannabis business in Europe with non-binding deals to supply a group of Maltese pharmacies. Zenabis shares are down about 96 per cent in the past year.

The Cannabis Council of Canada – an organization backed by the country’s licensed producers – issued a statement late Wednesday stating their disappointment with the government of Newfoundland and Labrador’s decision to ban cannabis vapes. The statement says the provincial government’s actions will put consumers at risk and may now force them to turn to unregulated channels. The industry group noted that Health Canada regulations are “even more stringent than those for other non-inhaled cannabis products,” and that there are existing restrictions on the ingredients used in regulated vaping products.

Auxly Cannabis Group said it plans to begin sales of its Cannabis 2.0 products later this month and announced it has signed supply agreements with nine Canadian provinces. The company said it has secured more than 250 listings for its vape, chocolate and chewable products in those provincial markets. Auxly said in a statement that its branded vape products go “above and beyond applicable regulatory requirements” to meet Canadian safety standards. In October, Auxly said it submitted 83 separate notifications to Health Canada prior to making its next generation cannabis-infused products commercially available.

Supreme Cannabis announced Thursday it has leased a facility in Kitchener, Ont. that will bolster its plans to process, package and ship its brands to the Canadian market. The facility, a 107,000 square foot central processing plant, will be retrofitted in three phases, the company said. Supreme has submitted its application to Health Canada for a cannabis processing licence after completing a ‘clean room’ retrofit. It expects to begin packaging flower and pre-rolls by Q4 of 2020.

$108,601,913
— The amount of cannabis private retail sales in Canada in November, down five per cent from October, according to Cova Software, which provides point-of-sale services for North American cannabis retailers. 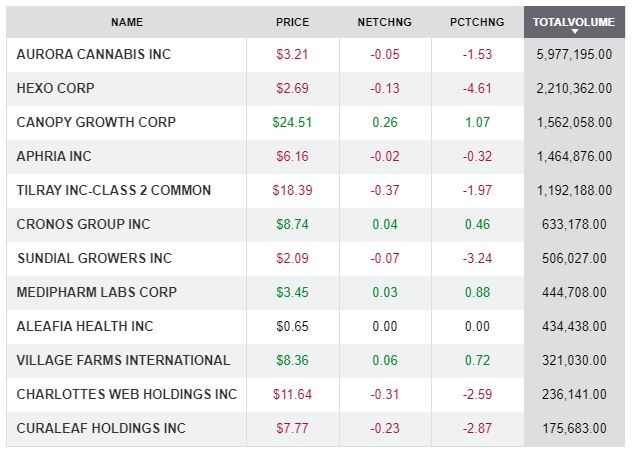