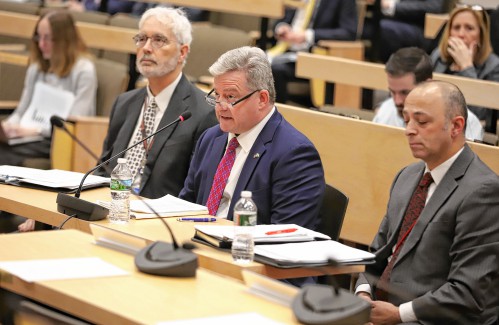 BOSTON — Massachusetts tax collectors are expecting to haul in between $93 million and $173 million in legal marijuana revenue this current budget year and could collect as much as $189 million in the next budget year, Revenue Commissioner Christopher Harding told lawmakers Wednesday.

After collecting $22 million in state tax revenue from marijuana sales in fiscal 2019 — which ended in June and included the first eight months of legal sales — Harding said marijuana revenues in the current fiscal year are “fairly close to” the expected range,. For the budget year that will begin in July, Harding said, the state can expect to see between $102 million and $189 million in pot tax revenue.

“We expect that revenues will continue to accelerate as retail outlets are licensed and open for business,” Harding told the Joint Ways and Means Committee at the annual consensus revenue hearing. “However, from a revenue perspective, the legal marijuana market is not yet fully developed, and uncertainty remains around the rate at which the market will grow and how prices will change over time.”

Cannabis sales in Massachusetts are subject to a 10.75 percent excise tax and the state’s 6.25 percent sales tax, as well as a local tax of up to 3 percent. The Department of Revenue’s estimates include only the state share of those tax revenues.

Since the first two marijuana retailers opened in Northampton and Leicester on Nov. 20, 2018, more than 30 more outlets have opened, and the state’s licensed stores generated $393.7 million in gross sales during the first full year of operations, the Cannabis Control Commission announced last month.

The revenue commissioner said the state is running “a little bit shallow on [marijuana tax] revenues, year to date” and noted a slight decline in sales in the latest release of data. Though he deferred an explanation of the decline to the CCC, Harding said that one of the product types that saw a drop was concentrates.

“You could equate those to some of the vapes and that is the category that seems to have taken the hardest hit,” he said.

In September, Gov. Charlie Baker banned the sale of all vaping products, including cannabis vapes. Though a court challenge eroded some of the ban as it related to cannabis products, the CCC took its own action to impose a quarantine of all marijuana vaping products except those that vaporize flower for medical patients.

Concentrates, including vape cartridges, accounted for roughly 20 percent of all legal marijuana product purchases in Massachusetts, based on a one-week snapshot provided by the CCC in September.