Alexis Bronson is having some serious trouble with his neighbors — and he hasn’t even moved in yet.

Since the spring of 2018, Bronson and his business partners have been working to transform a vacant storefront at 152 Geary St. in the heart of San Francisco’s posh Union Square into a high-end cannabis store.

Bronson has been selling marijuana since long before it was legalized. Growing up, he and his family bounced between single-room-occupancy hotels in San Francisco and the East Bay, sharing bathrooms with drug addicts and prostitutes. He took to selling weed in high school to supplement his family’s meager income.

But last month, Bronson’s dream ran into the buzzsaw of San Francisco bureaucracy and neighborhood pushback. Two companies on either side of 152 Geary — including the luxury retailer Chanel — have challenged his proposal, saying the store would be out of place in the neighborhood. The challenge means Bronson must argue his case at a Feb. 6 Planning Commission hearing.

Winning permission to operate a legal recreational cannabis business is already a daunting process as applicants spend months — or years — working with a bevy of city departments.

More than two years after the Office of Cannabis was created to regulate recreational pot sales, the city has yet to award a single permanent permit to a marijuana business. That’s largely due to the complexity of the process and the fact that the office’s six employees are tasked with handling hundreds of applications.

Neighborhood opposition to cannabis stores presents another difficulty for operators. For Bronson and his business partners — the Seattle-based cannabis operator Have A Heart — the challenge could add millions of dollars in costs and months of delays.

“Union Square has long been the center of luxury retail in San Francisco,” attorneys for Chanel wrote in their challenge to the project. “The retail pot clientele is completely at odds with the luxury clothing and accessory clientele and the presence of the Have A Heart dispensary will have a significant detrimental effect on these long established businesses.” 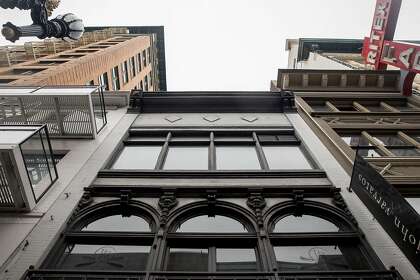 Similarly, an attorney for 146 Geary LLC, which the owns another storefront adjacent to Bronson’s proposed store, wrote that the store “will degrade the retail shopping experience in this corridor and is entirely out of character with the other retail uses.”

None of the lawyers representing Chanel or 146 Geary LLC responded to requests for comment, nor did a Chanel representative.

“Reading all of that, it rocked me to my core,” Bronson said. The presumption that a marijuana business was out of step with the environment struck Bronson, who is African American, as a vestige of the “institutionalized racism” that links drug activity with impoverished people of color.

The United Food and Commercial Workers labor union, which has unionized workforces at other Have A Heart locations, is planning to picket Chanel on Thursday to support the pot shop and the jobs it could provide.

Bronson is seeking his cannabis business permit as an “equity applicant.” San Francisco, Oakland and other cities give equity applications priority over other applications. It’s an effort by the city to provide a measure of restitution to people hurt by the war on drugs, which has resulted in the mass incarceration of people of color.

Bronson said he had some minor run-ins with law enforcement over the years, but was never convicted of a felony.

“It wasn’t that I wanted to take the quick route for the drug cash, I was trying to survive,” he said. “It was a ways and means for me to afford clothes and food.” 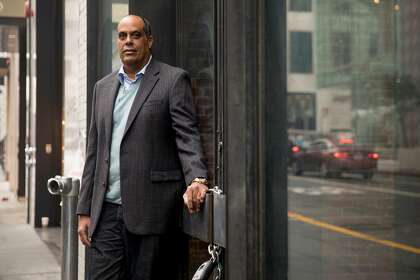 He left the black market behind to sell cannabis to dispensaries after the state legalized medicinal marijuana in 1996.

And Have a Heart has needed those deep pockets. Josh Udovich, Have A Heart’s director of expansion, said the company paid about $15,000 just to obtain the lease, finalized in October 2018. Since then, the company has shelled out “well over six figures each month” in rent.” He said it could be months — at best — before the business might start making money.

“We have eight projects in development in California right now, and San Francisco is by far the most difficult from a time perspective,” Udovich said.

The USBID has an economic development policy for cannabis retail that urges pot shop applicants to find sites “on the edge of the district (rather than in the more luxury retail areas in the heart of the district.” The policy also poses security mandates and insists that applicants gain “community support for the storefront through extensive outreach.”

Udovich said Have A Heart has spoken several times with the USBID and he’s amenable to the group’s requested design changes. 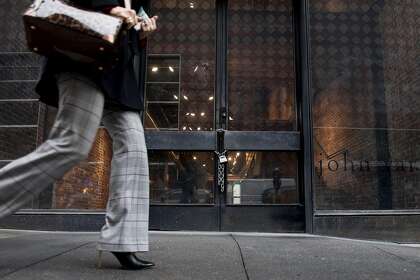 The district also created a “luxury zone” inside of which pot shops are discouraged from operating. The zone includes 152 Geary, but USBID Executive Director Karin Flood said the zone is not sanctioned by the city and cannot be legally enforced.

Flood said her group has supported several other cannabis operators who have opened in Union Square or are attempting to. But other pot retailers, she said, have staked out locations outside the luxury zone. Chanel and other retailers “don’t really know what this might bring, and what they don’t know makes them nervous,” she said.

“Luxury likes to coexist with other luxury, and this is very different. Maybe it’s not a problem, but they’re concerned about what this is going to bring,” she added.

Supervisor Aaron Peskin, whose district includes Union Square, said he was unaware of the luxury zone. He deferred to the City Planning Commission about whether to approve the pot shop, but said cannabis retailers don’t inherently fuel crime. Still, another neighborhood in his district, Chinatown, won a ban on pot shops last year. The ban was prompted in part by resistance to marijuana by many in the Chinese American community.

“I’ve visited some of these cannabis storefronts and some of them are quite luxurious and high-end in and of themselves,” Peskin said. “San Francisco is facing an ever-increasing number of retail vacancies, including in the Union Square area. We should keep our minds open.”