Major insurance providers, including Berkshire Hathaway and Aon, have begun to offer coverage to American companies in the legal marijuana industry, which had long been off-limits due to regulatory or reputational reasons.

However, investors and executives say many insurers remain cautious in their approach, resulting in higher prices. They argue that more widely available coverage is badly needed.

“One of the most miserable things I have to deal with for my job is getting insurance,” said Tim Conder, chief operating officer of publicly traded TILT Holdings, a Massachusetts-based group that owns a variety of cannabis-related companies and reported $46m in revenues in the third quarter.

Marijuana is now legal for recreational use in Canada and 10 US states and is either decriminalised or approved for medical use in many others. Every part of the business — cultivation, lab testing, distribution and retail sales — requires insurance coverage, from general liability to property and workers’ compensation.

Reliable numbers on the size of the industry are hard to come by but legal spending on cannabis in the US was just under $10bn last year, while cannabis companies attracted $14bn in funding, according to BDS Analytics, an industry consultancy.

Neil Hitchcock, chief executive of Bermuda-based insurance broker Skyfront, estimates that the legal US cannabis industry would pay about $1bn in annual premiums were it insured to levels normal for other businesses. The demand means that Skyfront is “incredibly busy” but “the problem is the limited capacity to take risk” on cannabis businesses in the insurance market, he said. 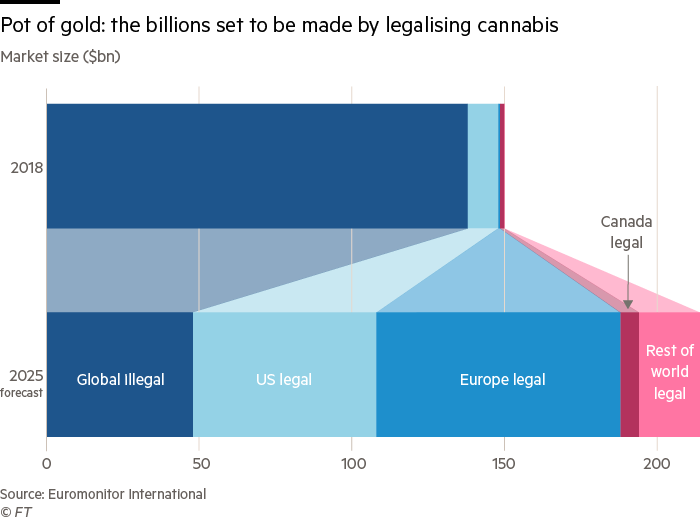 He pointed to Lloyd’s of London, where members of the market are not permitted to write cannabis insurance in countries where the plant is not legal at a federal level — which rules out working with US clients. The insurance marketplace said last year that it would begin providing cover to Canadian companies.

Five years ago, insurance was hardly available to the US industry at all. Things are getting better, stresses Mr Conder. Today TILT’s operating companies use insurance from both large providers such as Aon and small specialists such as Cannasure.

But others point to higher prices as a result of the restricted insurance supply. “If your business plan includes the word cannabis, expect to pay more,” said Kyle Nichols, president at the insurance broker Hugh Wood Canada, who added that even in a country where cannabis is legal, companies in the industry can pay five or even 10 times standard rates.

Kyle Kazan, founder of California Cannabis Enterprises, one of the largest cannabis companies in the US, also has extensive holdings in real estate and says his cultivation facilities in California pay double the insurance premiums required for his pecan farms in Georgia.

He said it was a challenge to find insurers who understand the industry. “You don’t want your local State Farm agent doing this,” he said. He uses insurers including Berkshire and Kinsale for property and workman’s compensation coverage.

He said obtaining directors and officers (D&O) coverage, which provides liability cover for senior staff and executives, and auto insurance for his distribution operations was a particular challenge.

Erich Bublitz, who oversees cannabis underwriting at Admiral Insurance, a subsidiary of WR Berkley, said his company avoids writing D&O coverage for cannabis groups because of their complex and sometimes opaque ownership structures, as well as the tangle of state and federal regulations.

“We don’t think there are enough controls in place for us to feel comfortable [writing D&O policies]”, he said. On auto insurance, he said, “workers in the industry tend to be users of the product — I’m not saying everyone who is driving is high . . . but auto is hard [to underwrite] anyway and you add in that factor and it becomes too hard”.

However Mr Bublitz does not think the rates charged to insurance companies are significantly higher than in other industries and he believes there is increasing competition for business. “Are [rates] higher than people growing soyabeans? Probably. But there are additional exposures [in cannabis],” he argued, noting that people rarely break into buildings to steal soyabeans.

Berkshire Hathaway and Aon did not respond to requests for comment.

Another risk insurers point to is the prevalence of cash-based transactions when people buy cannabis products, resulting in significant sums having to be carried by delivery people or held at retail outlets.

Cynthia Cleveland, president of the California cannabis company Vertical Brands, pointed out that this risk would decline with the passage of the SAFE banking act, a bill currently in Congress. If passed, the SAFE act would make it explicit that federally regulated banks are permitted to work with cannabis companies in states where marijuana is legal.