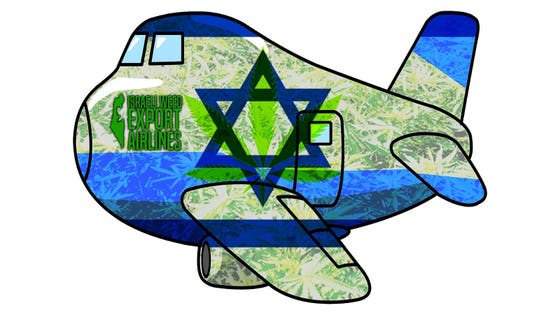 Cannabis export from Israel has received the final government approval.

The Israeli cannabis industry has been stymied largely for quite a while, largely in part to U.S. President Trump asking the Prime Minister and defacto Minister of Health of Israel, Benjamin „Bibi” Netanyahu to halt the export of cannabis flower from Israel.

While no official explanation was provided, and rumors abound over what President Trump specifically leveraged with BiBi to halt exportation of cannabis, Israeli industry watchers opine that influential Israeli-American billionaire Miriam Adelson -who is a physician specializing in substance use disorder- is against cannabis legalization.

While it is questionable that the fate of an entire industry would rest on one powerful person’s opinion, it is not unfathomable. Regardless, exportation has been a non-starter in the tiny country causing a downturn in foreign investment.

Bureaucracy long ensnared the export issue. After the government allowed export, the execution of the approval got stuck, skeptically perhaps because of the two chaotic governmental elections which followed.

Currently Israel can technically export cannabis, but only after the domestic demand is met. Compounding the quagmire was not having enough medical cannabis available domestically for patients, let alone for export abroad. The sale and export of Israeli medical cannabis has frustrated local marijuana farmers, causing a harvest overflow. Subsequently, Israeli streets are currently flooded with otherwise unsellable herb. (Israel decriminalized adult use cannabis possession in April, of 2019.)

A white paper on Israel’s Medical Cannabis Innovation, published earlier this month, maps out the current industry and demonstrates the first time the government has officially endorsed the key players and validity of the medical cannabis sector.

Despite these recent steps forward, some feel that the export of Israeli grown cannabis will still not be an imminent driver of market growth, but that Israel’s medical, agricultural and scientific know-how will continue to be the legacy of the Israel Cannabis contribution.

To that point, while there is a moratorium on exports, research and development (R&D) in Israel continues to flourish and the country holds its position as an industry leader in cannabis science. Unsurprising, considering Israel has always led the way in cannabis R & D, beginning with Prof. Raphael Mechoulam and his partner Y. Gaoni’s discovery and isolation of the tetrahydrocannabinol (THC) molecules and his significant work in identifying the human body’s endocannabinoid system. Prof. Mechoulam, a pioneer in the field, also identified another active ingredient of the plant, cannabidiol (CBD).

Since then, Israel remains a leader. From the invention of Syqe, the world’s first metered-dosage medical marijuana inhaler, to its groundbreaking cancer research. These important breakthroughs are nearly impossible to replicate in the United States due to cannabis’ Schedule One classification as a restricted narcotic.

One company, Tress Capital, a US-based private equity fund, is betting big on Israel’s continued innovation. Remaining patiently undeterred by the pace of progress, Tress has been an investor in CannaTech,  iCAN’s Tel-Aviv-based cannabis and technology focused conference, since its inception six years ago. In another vote of confidence in Israeli technical prowess, Tress recently invested in startup incubator, iCAN itself.

„Tress investing in iCAN is a next step in a long-standing strategic relationship. The deal broadens our international exposure and has enabled collaboration on cross-border joint ventures to the benefit of portfolio companies, clients, and investors of both firms. Now more than ever, global market access equals competitive advantage – especially in the current market environment. In working together, our firms can provide investors with greater global intelligence and deal flow, and an unmatched one-stop access point for cannabis related companies to explore corporate development and global market opportunities,” said Hess.

While Tress is ramping up its Israeli investment strategy, and others place their bets on imminent exportation allowances, some Israeli cannabis industry insiders are hedging by pivoting to work in Africa and other regions.

Israeli cannabis company Tikun Olam, for example, created a USA subsidiary and licensed its cultivation technology to iaso for cultivation in Puerto Rico.

Israeli company Kanabo has sold to England-based Spinnaker, and is about to go public on the London Stock Exchange.

Laura Kam, President of Kam Global Strategies, a strategic communications company with many Israeli cannabis clients summizes on the current situation in Israel.

„There has been significant investment in cannabis farms and technology in Israel over the past several years with the view to export; but due to bureaucratic infighting and now, with a caretaker government that is unable to  give the final regulatory nod to export its crops as flower, oil or in other forms, there is much angst within the Israeli cannabis ecosystem. Many have decided to invest their funds and technological know-how outside of the country, setting up farms in places like Malta and Uganda and investing in or founding cannabis companies around the world, from Poland to the United States to Australia and elsewhere.”

Israel is not out of the game by any means, but Kam believes that the inability to gain  export rights has allowed other nations to catch-up in what should have been a slam-dunk for the startup nation.

It appears to be a shame that a country on the forefront of cannabis technology, research and innovation, is still unable to export domestically cultivated cannabis.

According to one attorney in Israel, the country’s restrictions on cannabis exportation is on the cusp of significant progress.

Adv. Hagit Weinstock, Founder and CEO of the Weinstock-Zehavi law firm, jumped on the cannabis legalization bandwagon in 2015, after an Israeli unregulated cultivator sought her legal advice on why he couldn’t seem to obtain a license. He was frustrated that no one in the government would advise him of the criteria, back when Israel had eight authorized growers.

Ms. Weinstock says that these chosen eight were the „round table of medical cannabis and wouldn’t want anyone interfering or competing with them,” until she represented their colleague’s claim. As a result, the farmer obtained his licensing criteria.

In Feb, 2017, the Ministerial Committee on Legislation approved a bill regulating exports of locally grown cannabis. The bill’s author, MK Yoav Kisch, estimated these exports could bring the State of Israel more than $250 million annually. One month later, 40 farmers were awarded licenses.

Ms. Weinstock continued to fight on behalf of Israeli farmers, going as far as to align with the Industrialists Association to threaten to personally sue the Minister of Health for damages.  Whether or not this was a publicity stunt, the catalyst for change, or completely unrelated, a week later the ministry published a set of instructions for exporters. (Ms. Weinstock’s fight is not entirely altruistic or patriotic, as she owns a cannabis company in Germany.)

Building on the momentum and representing their fight against the Ministry of Health all the way to the high court, to expedite the approval of exportation, Ms. Weinstock asserts that companies began receiving approval to start exporting in practice, as of last week.

Even if the moratorium on Israeli cannabis cultivation for export is officially lifted, not all Israeli cannabis companies are currently compliant under the complicated Good Manufacturing Practices certified for Europe (Eu-GMP). Therefore, once export is genuinely approved in praxis, it still must meet the additional logistical hurdles and stringent criteria for importation to Europe.

Ms. Weinstock and her representative assert that Israeli companies such as Panaxia, Breath of Life and Bazalet are Eu-GMP complaint and in the next step —the auditing process— for export to Germany. Others contradict this assement, assuring the audits must conclude before Eu-GMP certification is granted. Either way, the German audits will potentially take months before Israel’s cannabis is eventually dispersed outside its borders.