In 2016, cannabis wellness company dosist (then known as Hmbldt) released its Dose Pen 200 and changed the way people consume cannabis. The vaporizer gives an exact dose of 2.25 milligrams of cannabinoids each time you take a hit. Airflow technology causes the pen to shut off and vibrate when you’ve inhaled the full dose, after roughly three seconds. The Dose Pen was a smash hit. Time magazine named it one of the best inventions of 2016 — not in just the cannabis space but in all categories, along with shoes that tie themselves and folding bike helmets.

That was three years ago. Since then, many eyes have been on the Los Angeles–based company to see what the sequel would be. That product dropped this fall, when dosist released its patented Dose Dial in two of its L.A. flagship stores (or “Wellness Experiences,” as they call them). The company describes it as “the first dose-controlled delivery device in the edible category.” The oval-shaped dial is child-resistant and dispenses one 3.7 milligram dissolvable tablet with the press of a button and spin of a dial.

According to dosist CEO Gunner Winston, the Dose Dial took 18 months of intense R&D before it hit the market. Here’s why and how it came to be.

Related: How This Cannabis Brand Designed a Modern Product With Nostalgic Packaging

While dosist built its business on the success of the Dose Pen, the company didn’t want to be a one-trick pony. “As an investor, I understand that companies have to have multiple pillars to stand on,” says Winston, who came out of retirement as a successful hedge fund founder to take the reins at dosist in 2017.

Winston points to success stories like Starbucks’. “What would they be if they only sold you coffee and didn’t move on to the variety of drinks they have, combined with mobile ordering?” he asks. “You have to innovate. All the greatest companies do. That was really the genesis behind dosist’s thinking about new products.”

But innovation for innovation’s sake isn’t enough. Brands also have to make smart choices. After all, not everyone is comfortable with smoking or whipping out a vaporizer in front of the kids or on a first date. dosist wanted to appeal to a broader market beyond.

Edibles stood out as a popular alternative, particularly among the canna-curious, who like the idea of getting a little high but are freaked out about smoking a joint. But there are also negatives. “Edibles are inconsistent. They’re often high-dose, 5 to 10 milligrams, and can get you intoxicated for a very long time,” explains Winston. Then there’s the whole Altoids factor. “If you look at THC mints, a lot of them come in traditional packaging, which suggests that you open the tin and take as many as you like.” Because edibles often come in sugary, candy form, people eat higher doses than they should, which can lead to really bad experiences.

So a decision was made to create a low-dose, fast-acting tablet delivered in a controlled, child-resistant device. But how? 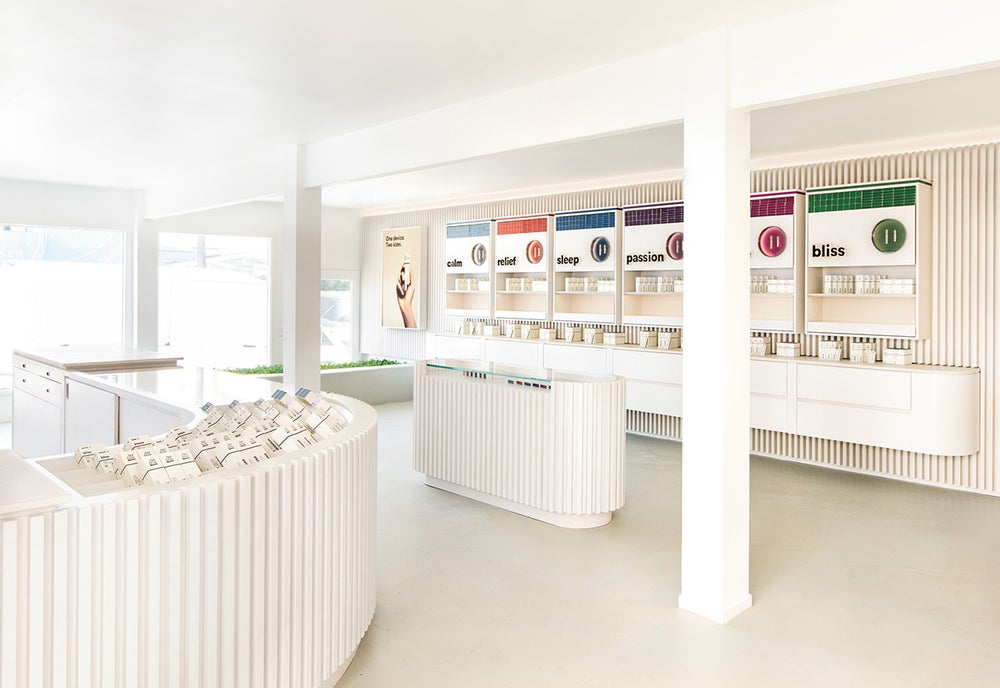 The clean, simple design of the dosist “Wellness Experience” is meant to appeal to people who normally wouldn’t be caught dead in a marijuana dispensary.

Getting the ingredients right.

One of the first stops on the dial was making sure it was precise and consistent. After all, the company is called dosist, so that’s sort of its jam. dosist did more than 400 consumer studies with different formulations. “We’re testing for a variety of things — the efficacy, the onset time, the taste,” Winston says.

It started at 2.5 milligrams, but Winston explains, “People were trying one tablet and then, when nothing was happening, taking two, and 5 milligrams got them really, really high.” The company eventually figured out that 3.7 milligrams was the magic number. “That was the precise dose for people, not just the lowest dose. The low-potency seeker can use 3.7 milligrams, and it’ll work for them. The heavier-­potency user was able to take two — 7.4 milligrams — and it wasn’t making them too high,” he says.

Flavor was also important. Because dosist was concerned that sugary flavors such as cherry or bubblegum would lead to overconsumption and appeal to kids, it went with peppermint. It also decided to make the tablet a sublingual (meaning you stick it under your tongue) rather than a traditional mint you’d suck.

While dosist pens come in six different “need states” (such as Sleep and Passion), the early run of the dial comes in only two: Bliss and Calm. Once again, this had to do with the different ways the body metabolizes cannabis via vaporization or tablet. During trial runs, they learned that the formulations — such as Sleep — weren’t working the same or as well. “But for Bliss and Calm, the consumer scores were off the chart,” says Winston. “So we thought it was a good start. Also, not to be greedy. We want to make sure people love these products so they go, ‘Wow, when’s Sleep and Relief coming?’”

Getting the device right.

Once it perfected the ingredients, dosist turned its attention to the delivery system. There were a few big challenges to tackle. First, the look of the device had to be inviting and unintimidating. “I believe design is fundamentally to bring into the category people who are often unsure or even scared when they see cannabis,” says Winston.

Related: Mary Jane: How the Cannabis Industry Can Win Women Over

A decision was made to make the device look modern and new, so people seeing it for the first time would ask what it is. The moment you show someone a gummy or a joint, it instantly creates a certain narrative of either “I don’t do that” or “Pass it.” By keeping the design of the dispenser fresh and ambiguous, customers are less likely to come with preconceived opinions, Winston says. Months were spent getting every facet of the device right. Like the pen, the dial is made with white, high-­quality recyclable plastic that is light but sturdy. And the messaging is minimal but precise: Dose Dial Bliss (or Calm). No excessive branding or green crosses.

Second, the device had to be easy and intuitive to use. This might sound easy in principle — but in execution? Not so much. “We spent many a night fighting about how to use the device and the most effective way for people to dispense the tablet while simultaneously being mindful of resisting it for children,” says Winston.

A month before the Dose Dial was released, an 11th-hour decision was made to make it a one-handed endeavor. Says Winston, “We were so focused on making it child-resistant, we probably put ourselves in a little bit of a hole where we had a device that was brilliantly created, but you needed two hands to use it.” Then someone on the innovation team named Alicia Wilfork told them the disheartening news that the test consumers were confused about how to use the dial. Using both hands caused the tablet to fall on the floor — not a good customer experience. Wilfork suggested a simple modification in the dial that enabled its use with only one hand. Users open the slot, tilt the device at a 45- to 90-degree angle, and push a button with their thumb while rotating a wheel on the side counterclockwise. (Note: This is easier for righties.) The device then releases one tablet, and the slot closes. They also included clear instructions with illustrations in every box.

To date, feedback for the Dose Dial has been positive at the two Wellness Experiences that sell it. But Winston isn’t uncorking the wellness champagne. Just as the Dose Pen evolved and changed over time, so might the Dose Dial. “We’re going to learn and get feedback on the consumer experience, in case the studies weren’t relevant. Because when it’s in the market, it’s just different.”

Related:
How One Brand Hopes To Change The Way We Think About Edibles
Burning Taj Hotel Made Us Want To Use Our Drone Technology For Defence Purposes, Said This Co-founder
Pure Barre’s President Is Getting the Brand in Top Shape