Dollar General (NYSE:DG) is jumping on the CBD bandwagon, announcing it intends to start selling products infused with cannabidiol in 1,100 stores across seven states by spring 2020. It is limiting its selection of goods to topical products such as creams, ointments, bath bombs, bath salts, and face masks. Edibles are not part of the plan.

Yet where grocery stores, shoe stores, pharmacies, and wellness stores have all previously said they, too, were joining the conga line of retailers selling CBD products, the dollar store chain’s entry has a greater chance of boosting its bottom line. 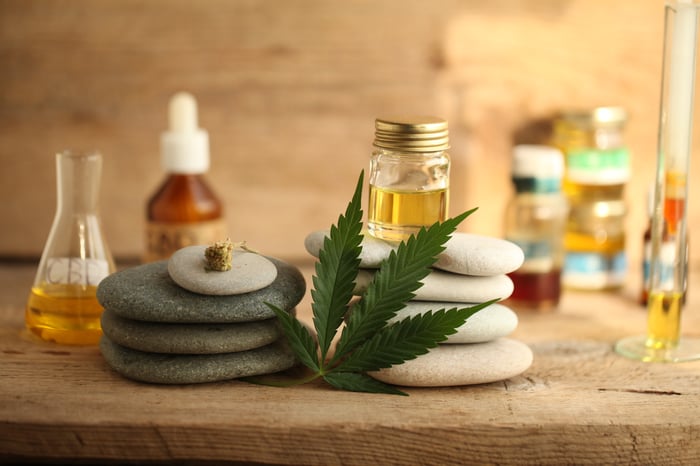 Unlike many other retailers and even rival Dollar Tree, Dollar General is on fire, giving a master class in discount retailing in the third quarter. Sales rose 9% to $7 billion on a near-5% increase in comparable-store sales, generating a 13% rise in earnings per share. Management also raised top- and bottom line guidance for the year.

It was tough to pick out a category that was best, as it saw across-the-board sales increases, but it was enough for the discount chain to know it needed to pick up the pace of expansion. Where it expects to open 975 new stores this year, it plans on opening another 1,000 in 2020. In all, Dollar General will be involved in 20% more real estate projects next year than it was this year.

That’s important because as it continues to reach further into all regions of the country, getting closer to its target customer, CBD products afford it the opportunity to accelerate that growth.

The madness of cannabis

Marijuana, cannabis, and cannabidiol all live in a legal purgatory. Although a number of states have legalized marijuana for personal use, it officially remains a controlled dangerous substance at the federal level.

Cannabis, on the other hand, essentially comprises two categories, marijuana and hemp, with the major difference being the presence of tetrahydrocannabinol, or THC, the psychoactive compound that gets a user high. While hemp does contain THC, it is at very low levels and not enough to get someone high. The 2018 Farm Bill removed hemp and hemp-derived products from its list of controlled dangerous substances.

CBD is one of over 100 compounds found in cannabis, but unlike THC, it doesn’t get you high. Also, where marijuana has very little CBD, hemp has a lot. Many also believe CBD has a variety of therapeutic properties, and though some studies have seemingly backed up the claim, there haven’t been very many studies, and the long-term implications from its use are still unknown.

The Food and Drug Administration is slow-walking the formulation of a coherent policy on CBD, which has put many retailers in limbo on just how best to proceed. What the FDA was clear about in its recent policy update, however, was that it is illegal to add CBD to food or supplements. That’s why you see retailers opting for topical applications of the compound.

Cannabidiol has another benefit for the retail industry in that it enjoys over dried cannabis, or so-called legal weed. Consumers have demonstrated willingness to pay up for the compound, and there is a plentiful supply of CBD, suggesting profits will remain stable.

That’s an attractive feature for low-margin businesses like grocery stores. But Dollar General, which sells merchandise at many different price points, tends to make up in volume what it loses out in product markups. Driving down the cost of CBD-infused products could cause consumers to flock to its stores.

And for a discount chain, Dollar General is a relatively high-profit-margin business. Over the past five years, its operating margins stand at almost 9% and net margins are 6%. But compare that with other retailers that have announced they will be selling CBD products.

The retail market is expected to be the biggest contributor to CBD’s growth, accounting for 60% of the forecast $20 billion in annual sales. Dollar General has the potential to bring CBD products to more people and attract a bigger share of the market because of its value proposition.

While there may be questions about the viability and efficacy of the CBD in the products it offers (a question that looms over all retailers selling CBD products), CBD has a higher chance of moving the needle for Dollar General than it does for anyone else.