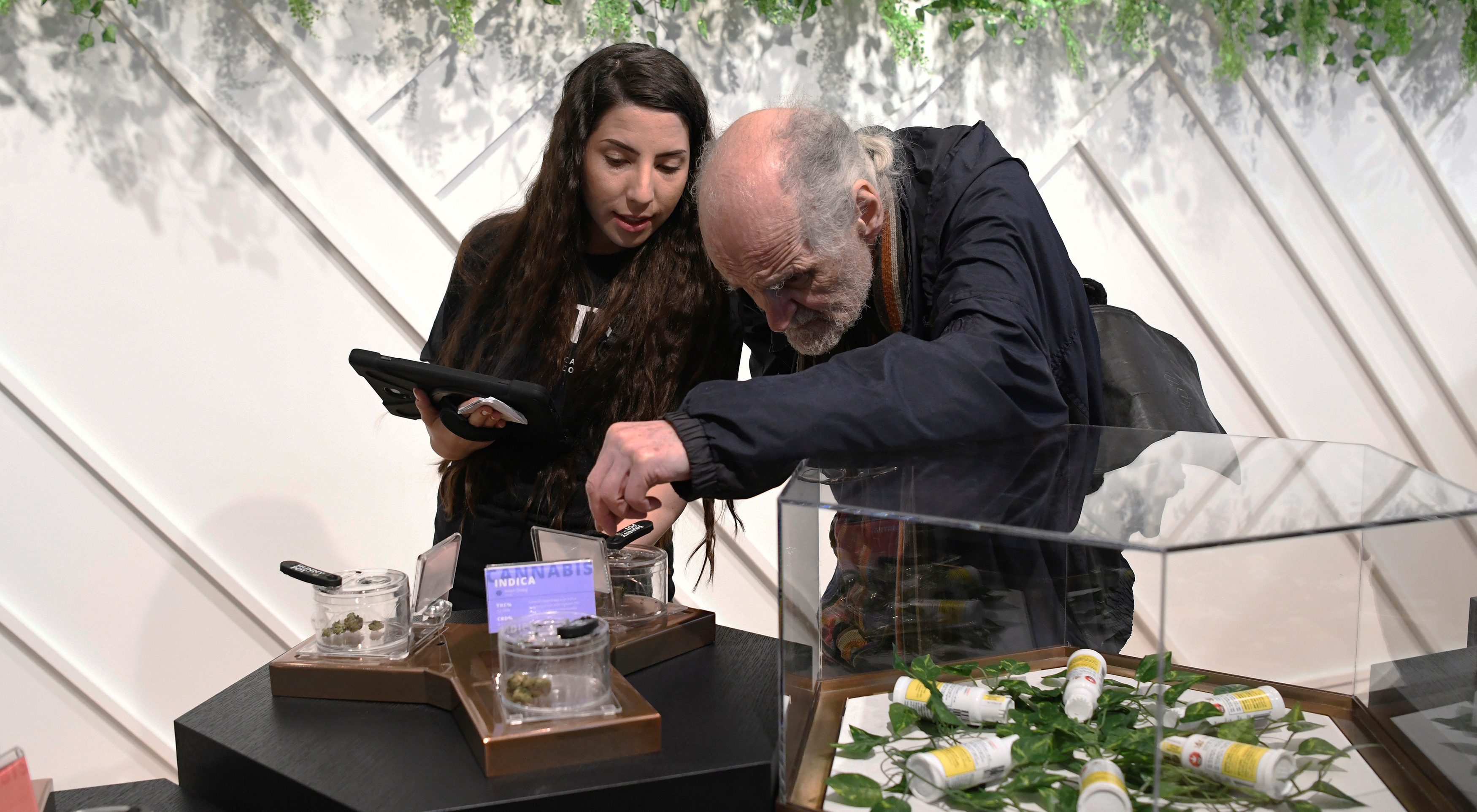 It’s been a brutal year for weed. The six largest publicly traded cannabis companies lost a collective $25 billion in market value since late March—a bloodletting Kevin Murphy, chairman and CEO of Acreage Holdings, compared to “2008 for the cannabis industry.”

The Marijuana Index, which tracks the stocks of the 45 leading North American cannabis stocks plummeted 63% percent after April 1, as investors fled a sector rocked by new regulations slowing rollouts in mega-markets such as California and Canada.

“There was a bit of a shock to the most of the industry,” says Bethany Gomez, director of research at the Brightfield Group, a Chicago-based cannabis market research firm.

“The investor’s honeymoon is over.”

“The investor’s honeymoon is over,” Gomez says. Now, investors are treating cannabis companies like any other business, looking for solid fundamentals, high-quality products, and—oh yeah—profitability. “People still buy the dream. They still want to buy into the industry because they see longer term potential. But ‘one day maybe’ isn’t good enough for investors anymore.”

“We saw a big run-up, and we also saw a huge market correction,” Dayton says.  And because stock prices took such a dive, Dayton says potential investors see value opportunities now. “A lot of investors were staying out of this market because they felt like it was in the middle of a hype cycle,” he says. “People that have dry powder to invest in the [private cannabis] sector are really excited about deploying it right now.”

Many of the cannabis industry’s titans are based in Canada, where they enjoy nation-wide legalization and access to US investors. Unlike US cannabis companies, they’re not breaking US federal laws, and so can list publicly on US stock markets. Deloitte projects Canada’s legal cannabis sales in 2019 could reach up to $4 billion—and the market is about to get a big boost as new products come online. In Canada’s first year of legal cannabis, sales were essentially limited to cannabis plants, its flower, and oils. Now, Canada’s licensed producers will also be able to sell edibles, beverages, vapes, and topicals, such as lotions and balms. Canada opened up applications for these products in October with 60-day notice period, so the first products are just hitting shelves now.

The new products “will completely change the landscape of the market in Canada, and really push it a lot closer to a consumer-packaged goods model,” says Gomez, emphasizing that brands will be better able to differentiate their identities and products in this more diverse marketplace. “There will be a ton of new products coming to market that have been years in the making.”

Leading the charge should be Canopy, the behemoth Ontario-based cannabis producer which received a $4 billion investment from the booze giant Constellation Brands—parent of Corona beer, Modelo lager, and Robert Mondavi wines, among other brands—in 2018 in exchange for a 38% stake in the company. (Former Canopy CEO Bruce Linton blamed his ousting in August on Constellation’s influence.)

“If you have billions of dollars in R&D and a partnership with one of the largest alcohol manufacturers in the world,” says Gomez, of Canopy “you should be able to develop a pretty fantastic cannabis-infused drink.”

Other beverage companies, such as AB InBev and Molson Coors Canada, have entered into partnerships with Canadian cannabis companies (Tilray and Hexo, respectively), but as the largest among them, Canopy is the bellwether—and an indicator of the edge that these partnerships can give a cannabis company.

Stateside, the US continues its messy, uneven, and incremental march toward cannabis legalization.

At the federal level, the Secure and Fair Enforcement Banking, or SAFE, Act and the Marijuana Opportunity Reinvestment and Expungement, or MORE, Act are making their way through the House and Senate.

The SAFE Act, which passed a House vote in September, would allow cannabis companies to access banking and financial services they currently cannot due to federal prohibition. “That’s a real lifeline for the industry,” says Gomez, pointing out that new cannabis companies would gain access to business loans, rather than having to dole out equity in exchange for private investment. Dayton points out that while the impeachment process has slowed progress, it has also given lobbyists more time to win over potential support from Senate republicans.

The MORE Act would decriminalize the plant, and offer an avenue for people charged with or convicted of some cannabis-related crimes to expunge their records and avoid further penalties—but it stands little chance in a GOP-controlled Senate.

Of course, if either piece of legislation got past Senate Majority Leader Mitch McConnell—who opposes legalization—they would have to also get the signature of president Donald Trump. Trump has opposed legalization legislation in the past but in an election year, that may change.

In lieu of legalization or a more cohesive federal framework,  states continue to take matters into their own hands.

Come January 1, Illinois—the sixth most populous US state—will follow Michigan to become the 12th state where recreational cannabis can legally sold, in addition to the 33 states where its medical use is legal.

Illinois is also significant because it is the first state to legalize weed through its legislature, rather than ballot measure. Arcview’s Dayton sees this as an indication of real political progress on the issue. A recent Pew Survey found that fewer than one in 10 Americans support keeping cannabis illegal.

“It’s almost like cannabis may be the one issue in America that’s bringing people together,” says Dayton, adding that Major League Baseball’s decision to treat cannabis use by its players more like alcohol than an illegal drug could spark similar changes in the National Football League. “What’s more American than baseball?” he asks. “And nobody was upset about that!”

In 2020, keep an eye on the east coast too. In the New York state legislature lawmakers promised to push for legal recreational use in 2020, after legalization efforts fell apart over disagreements about regulation policy in June. After similar struggles to craft policies that accounted for decades of racially disproportionate drug policing, New Jersey will put the question of legalization to voters in November 2020. The governors of those two states convened with those of Rhode Island, Connecticut, and Pennsylvania in October, in an effort to come up with coherent and cohesive policies on taxing, social equity, public safety, and regulation. The meeting indicates a serious intention to move forward, but also hints these leaders won’t be in favor of rash or sudden moves.

“Once there’s consensus that they want to do something, that’s often when the fighting begins,” says Dayton.

Notable changes to weed’s legal status may also be afoot in New Mexico, Vermont, Arizona, Florida, and Montana, all states where legalization is being advanced in the legislature or by ballot measure.

Oh yeah! A presidential election is planned. What happens there is anyone’s guess, but here’s where some of the current front-running dems stand. Senators Elizabeth Warren and Bernie Sanders are in favor of legalization and co-sponsors of legislation of the Marijuana Justice Act, a bill that fellow senator and 2020 candidate Cory Booker introduced to end cannabis prohibition, expunge criminal records, and reinvest in communities harmed by the war on drugs.

Former vice-president Joe Biden is the odd man out here. In November, he told the audience at a town hall event that he was wary of cannabis, which he said may be a “gateway drug.” Instead of legalizing, Biden advocates reclassifying the plant’s status as a controlled substance to schedule II, opening the door for more research. He says he is in favor of decriminalization, but it’s worth noting that other schedule II drugs include cocaine and methamphetamine.

CBD and the FDA

Some fun facts: A recent Gallup Poll found that one in seven Americans say they use cannabidiol, also known as CBD, and according to the Grocery Manufacturers Association, three of four Americans believe the Food & Drug Administration (FDA) is regulating CBD. Surprise: it’s not!

This time last year, after the Farm Bill effectively removed hemp (which is just cannabis containing less than 0.3% THC) and its derivatives including CBD from schedule I—where the Drug Enforcement Administration (DEA) classified it as having “no currently accepted medical use and a high potential for abuse.” The FDA has continued to emphasize the agency has yet to evaluate or regulate CBD products aside from a single approved drug, Epidiolex, to treat epilepsy in children. The FDA recently made an announcement about potential health risks of CBD and held a public hearing to gather information about it in May. It seems a regulatory framework should be imminent, but then, that’s what we thought a year ago. Until then, all those CBD tinctures, topicals, and treats are unregulated, so buyer beware.

Cannabis science in 2020: the next CBD

One immediate effect of the Farm Bill, however, was that it cleared the way for research into hemp-derived CBD and the countless symptoms we are trying to treat with it.

Ziva Cooper, research director of the Cannabis Research Initiative at the University of California Los Angeles, says because of the “exploding interest,” she expects to see more “more rigorous, double-blind, placebo-controlled studies” of CBD for different diseases and symptoms in 2020. And that’s just the beginning.

CBD is just one of hundreds of naturally occurring chemicals in the cannabis plant, and the US National Institutes of Health (NIH) announced a series of grants in September to support the research of other lesser-known cannabis-borne compounds for treating symptoms such as arthritic pain and inflammation. Already, marketers and the media are talking about the “next CBD,” and these researchers may help to prove their efficacy.

“Everyone wants to know what’s coming down the pike,” says Cooper, rattling off other cannabinoids: “CBN, CBC, THCV. Some of that research has been percolating for the last decade or so, but it’s been very minimal. But now with this more public attention to it, I think that research is going to really blossom.”

Cooper also predicts an intensified focus on risk and safety, following the rash of vape-related respiratory illness in 2019, and more research on the effects of cannabis on specific demographics, whether growing teens, aging seniors, or pregnant women.

For her own part, Cooper has been focused on how cannabis could relate to another US health crisis—the opioid epidemic—and how chemicals from the plant might help patients reduce reliance on opioids when it comes to pain relief.

“Looking at cannabinoids as a therapeutic alternative to opioids is really important,” says Cooper, citing a 2019 study that showed promise for using CBD to break the cycle of heroin addiction. “We’ll see a lot of that in 2020.”