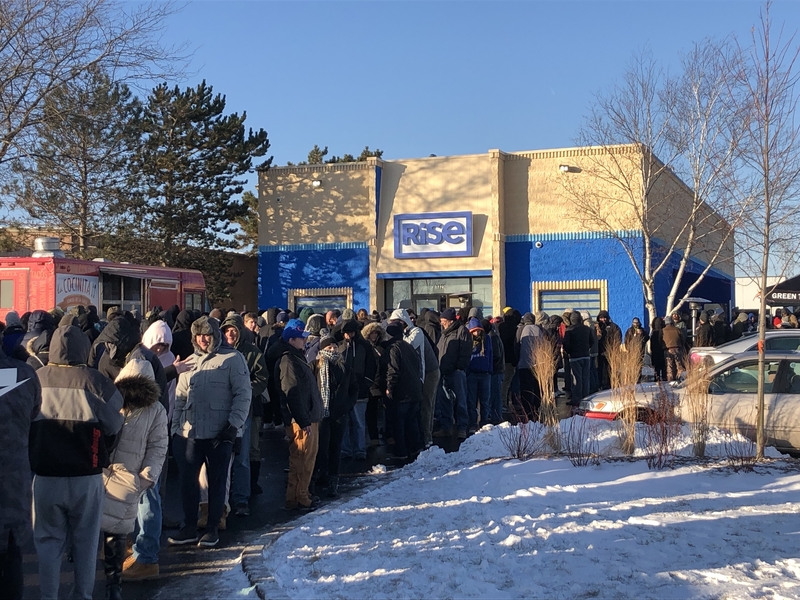 Jackie Ryan rang in the New Year in Wrigleyville by showing up at Cresco’s Sunnyside retail marijuana shop on Clark Street at 3:30 a.m. to make the first purchase of newly legal recreational weed in the wee hours of Wednesday.

“It’s better than Christmas when I got a Barbie Dream House,” she exclaimed to a throng of photographers.

A daily marijuana user, she said she’s glad to be able buy at a store instead of from a dealer. “It makes things easier,” said the 35-year-old Forest Park resident, who spent $120 on some buds, joints and edibles. “It’s always in the back of your mind, you’re going to get busted. Now it’s less of a big deal.”

Ryan was among thousands who lined up outside marijuana shops in the city and suburbs to buy marijuana on the first day its sale became legal in Illinois, braving temperatures in the 20s while most people were still sleeping off New Year’s revelry.

Some are regular users like her who welcomed the chance to buy weed in a brightly lit store in the light of day. Others wanted to be part of history as Illinois became the 11th state to allow recreational sales of marijuana

“I’ve been waiting for this since the ’70s,” Jan Tranen, a writer who lives in Lakeview, said while waiting in a line that stretched around the corner from the tiny 900-square-foot Sunnyside dispensary.

Weed shops around the state opened at 6 a.m. to throngs of people. Cars packed the streets of a light-industrial park in Mundelein, home to the state’s busiest dispensary, Rise, owned by Green Thumb Industries. It’s one of the few that’s open in the northern suburbs.

When CEO Ben Kovler arrived at 5:30 a.m., there were more than 500 people lined up in the parking lot. “Our first customer said he got here at 5 last night,” Kovler said. “It’s a bigger crowd than we expected. The tidal wave (around recreational cannabis) is real.”

The crowd ranged from Kate, a 26-year-old college student who, like many, said she was uncomfortable giving her last name because of the stigma that’s still attached to marijuana use, to Nick, a man in his early 60s. Kate was waiting to buy edibles out of curiosity because she doesn’t drink. Nick, who said he hadn’t “indulged in 16 years,” bought some marijuana flower, pre-rolled joints and edibles.

“I’ve been smoking for 28 years,” she said. “This is the first day it’s legal. I wanted to be part of history.”

The first sale in the state was recorded at Dispensary 33 on North Clark Street in Uptown.

Crowds were festive and in good spirits, despite waits. „The weather is cooperating,” said Paul Stewart, an adviser to Chicago Mayor Lori Lightfoot who is the city’s point person on marijuana.Politicians and weed industry veterans savored the moment.” It’s pretty cool,” said John Sullivan, executive vice president for public affairs at Cresco.

He opened what is now the Sunnyside dispensary in Lakeview five years ago under the MedMar name. „We went through a lot to get this place open. We were sued. When you think about how far the state has come, it’s amazing.”

State Reps. Kelly Cassidy of Chicago and Jehan Gordon-Booth of Peoria, who were among the co-sponsors of the bill that passed on the last day of the General Assembly’s regularly scheduled session in May, celebrated outside Dispensary 33. „We did get overwhelmed walking up here, seeing the line of people,” Cassidy said. „This is what it’s supposed to be.”

Lt. Gov. Juliana Stratton made one of the first purchases at Cresco, buying some Mindy’s glazed clementine edibles. She celebrated the 11,000 pardons issued New Years’s Eve by Gov. J.B. Pritzker, the first of many expected for people previously convicted of minor marijuana possession.

Putting an end to what many activists and politicians see as a failed war on drugs was key to getting the law passed. For Gordon-Booth, the issue is personal: „My stepson, D.J., lost his life five years ago over cannabis. We don’t talk about the fact that people lost their lives over this product.”

Privately, many dispensary operators wonder how long the goodwill—and availability of marijuana, especially the buds or „flower,” which are in high demand and short supply—will last. Some dispensaries were limiting the amount of product people could buy. Most thought they wouldn’t run out of product on opening day, but the weekend could be another matter.

Illinois launched recreational sales just six months after Gov. J.B. Pritzker signed the law making Illinois the 11th state to allow weed sales to the public. It takes six months to build new cultivation facilities and three months to grow marijuana, so the industry was fighting an uphill battle against the calendar from the beginning.

Dispensaries have been scrambling to get enough product, which can only be obtained from growers in the state. Mark de Souza, CEO of Revolution Global, which operates a medical dispensary in Mount Prospect and a cultivation center in downstate Delavan. The company sells to other dispensaries, making inventory available on Tuesday mornings. „We were sold out in six minutes,” said CEO Mark de Souza. „It used to take hours.”

Illinois hopes to generate more than a half-billion dollars annually from marijuana sales that are predicted to hit $1.5 billion to $2.5 billion a year when the market is fully grown. But it’s not clear when that will happen. Marijuana, especially “flower,” or the dried plant that’s most often smoked, will be in short supply until mid-year if not all of 2020, growers say.