To regain trust with customers during the vaping crisis, some vape brands are getting smart about how they use technology.

This story originally appeared on MJBizDaily

The worst days of the vaping crisis are likely behind the state-legal marijuana industry, but many MJ firms are turning to technology to help further boost cannabis vape consumer confidence as well as deal with the dip in sales that followed the health scare.

Examples of tech-based solutions available to cannabis companies include:

Paul Botto, co-founder and president of New York-based cannabis tech platform Lucid Green, said consumers are demanding to know what’s in their marijuana products, and tech solutions provide a convenient way for them to access that information.

“For us, and increasingly for the general industry, it all comes down to trust and transparency,” Botto said.

RELATED: How Vape Manufacturers Are Striking Back Against Counterfeits

The vape crisis has hurt business in all adult-use cannabis markets in the United States.

And while vape sales are edging back up in major markets, most have not yet fully recovered to what they were before.

Here’s a rundown of some recent sales numbers: 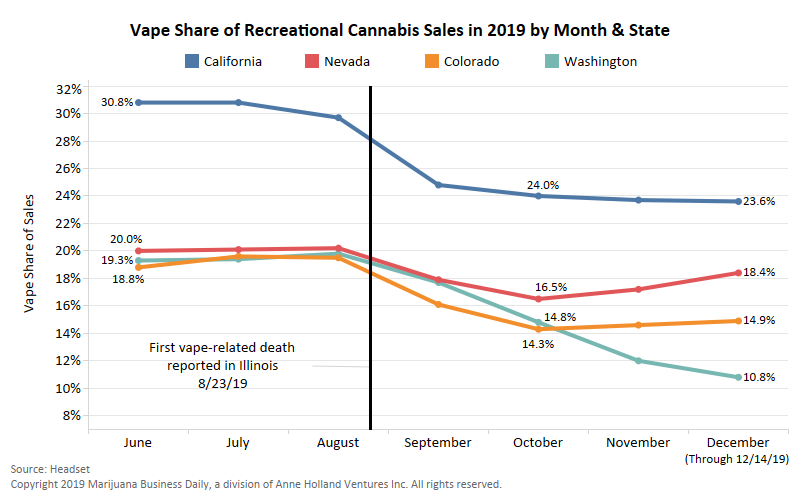 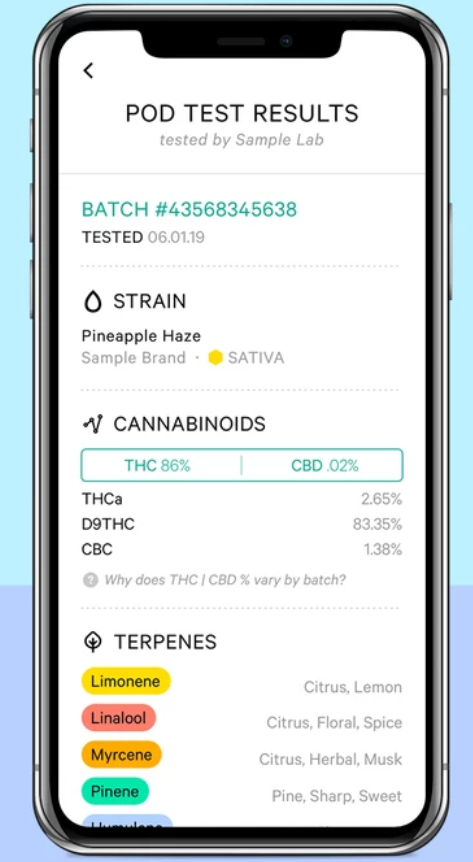 The app had been in development before the vape crisis but was rolled out in November to address consumer concerns.

The Pod ID system is available on smartphones using the Android operating system and allows consumers to access information about the pod they’re using. (Apple recently banned all vaping apps.)

The app shows the COA, state testing results, information about the producer and the cannabis strain, including potency, as well as consumer reviews about the strain and its specific batch.

“We want to be educating consumers about what they’re consuming,” Silver said. “We feel like access to those certificates of analysis is a great place to start.”

Silver said consumers have been asking for these options.

As the platform provider, Pax’s goal is that a consumer can go into any dispensary, buy a cartridge and have the lab report available. 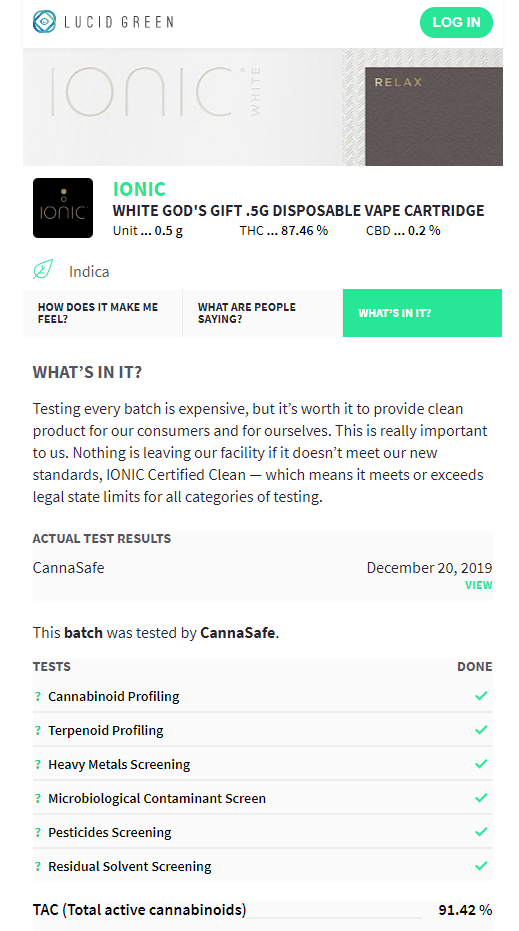 “It’s important for consumers to have access to information that says this is a tested product,” Botto said.

He added that the demand for his product has gone up as the vape health crisis raised alarms.

Budtenders at marijuana retailers also can scan products using the QR codes to help communicate to shoppers that a product has been adequately tested.

Beyond alleviating safety concerns, consumers also receive the added benefit of tracking usage, including dosage, to help determine what works for them and what doesn’t.

“This transparency has really started to matter at the consumer level,” Botto said, adding that black-market products are less likely to include such a feature, which should help drive consumers away from illicit businesses to legal ones.

One concern with the vaping crisis came from knockoff products designed to look as if they came from licensed cannabis companies.

Airgraft, a Montreal-based vape technology manufacturer, sells vape oil pods containing an encrypted chip that communicates with the vaping device to ensure only legal-market pods can be used with the device.

The pods are connected to a specific batch of vape oil that is stored in Airgraft’s servers. When the user activates the device, the servers confirm the oil is legitimate.

Like the other vape tech mentioned above, a consumer can use the Airgraft app to access the pod’s COA and evaluate contents, including lab test results.

“If you’re going to inhale it, you should know what’s in it,” said Mladen Barbaric, founder and CEO of Airgraft.

The company has launched in California and, according to Barbaric, has maintained stringent standards for which producers it works with.

For example, it doesn’t allow any cutting agents such as vitamin E acetate — which has been identified as a possible culprit for the illnesses — in its cartridges.

RELATED: I Smoked A Black Market Vape. This Is Why I’ll Never Do It Again

At Lucid Oils, a Seattle-based cannabis extraction company, the company tests its oil once it has been put in the hardware to determine if any heavy metals have leeched into the oil.

Even though Washington state doesn’t require the test, Jim Makoso, vice president at Lucid Oils, said the company does that to maintain quality control.

The oil is tested first for the standard contaminants such as mycotoxins and microbials, then again once the oil is heated and exposed to the hardware similar to how a consumer would use it.

Makoso noted the additional test adds thousands of dollars to his business expenses, but “it’s a very small cost for peace of mind.”

Eli McVey contributed to this report.