The hunt for one of 14 licenses to operate a medical cannabis pharmacy in Utah is over.

State health officials on Friday announced the 10 companies that are on track for permission to operate the retail locations, more than half of them strung along the Wasatch Front.

Three cannabis retailers are proposed for Salt Lake City, with others slated for Provo, Park City, Ogden and West Bountiful, the Utah Department of Health announced. The agency sorted through more than 130 applications submitted by about 60 companies, winnowing the list down to the handful of businesses now slated to win licenses.

“We feel like that was a good thing for the state of Utah that there was so much competition,” said Richard Oborn, who directs the Center for Medical Cannabis at the state Health Department. “We feel like we’ve got a good set of applicants that come to us with a lot of confidence in what they’re doing and a lot of knowledge and expertise.” 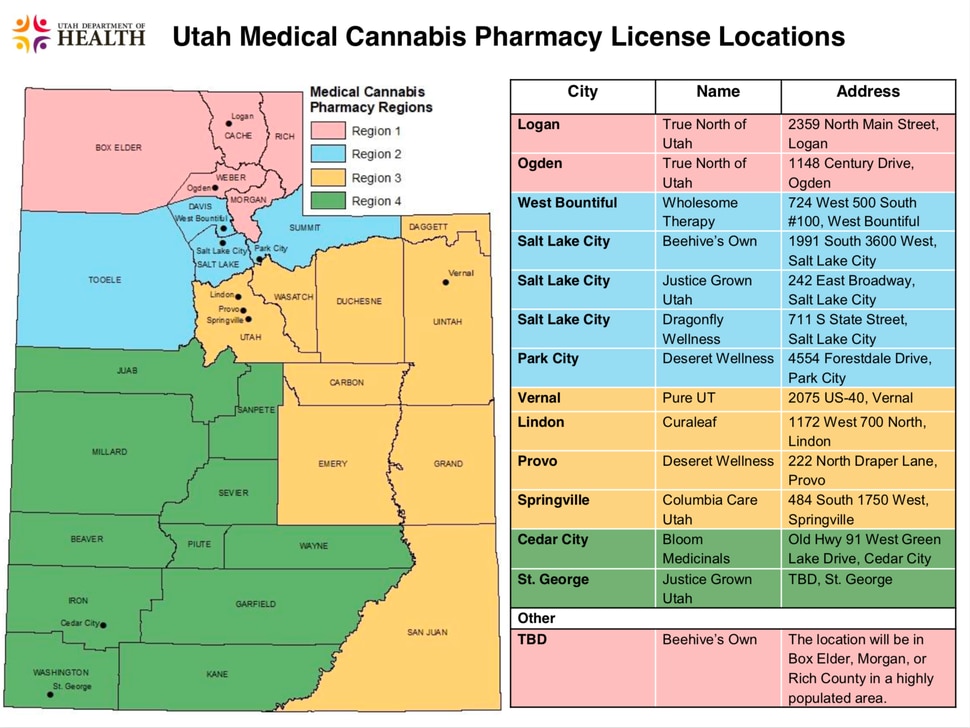 (Courtesy of the Utah Department of Health) State officials released the names and locations of Utah’s medical marijuana pharmacies on Friday, Jan. 3, 2020. Some of the pharmacies could be up and running by March 2020.

Desiree Hennessy, executive director of the Utah Patients Coalition, said the launch of the state’s full-fledged medical cannabis program finally feels close with the announcement of the pharmacy operators.

“I’m hopeful that this is one of the last pieces of the puzzle that we’re putting in place to get Utah patients the medications that we’ve been fighting for for years,” she said in a phone interview.

The licenses are separated into two groups — eight of the awardees are permitted to open March 1, while the remaining six must hold off until July 1. While Oborn sounded optimistic that cannabis would be available for sale in three months, Hennessy pointed to the challenges of opening a business on such a compressed timetable.

The agency divided the licenses between four geographic regions in the state to create a more even distribution of pharmacies and better access for cannabis patients. Still, vast swaths of the state will be without a pharmacy.

And state officials can continue adapting the program to meet patient needs once the system is up and running, he said.

“It could be that in the future, there is demonstrated a need to have additional locations of additional pharmacies,” Oborn said.

A couple of the awardees landed licenses to operate two locations, the maximum allowed by state law.

Here are the companies slated to receive cannabis pharmacy licenses:

There are several more steps before the state actually awards the licenses to these businesses. For one thing, individuals with a financial interest in the companies must pass a criminal background check, Oborn said. The companies also have to submit an operating plan to the state, and some still have to secure local approvals for their proposed site.

The companies also must pay a fee to the state; the annual cost of each license ranges between $50,000 and $69,500, depending on whether the pharmacy is in a rural or urban area and if it offers home delivery.

Jordan Lams, the principal for Pure UT, predicted that his Vernal pharmacy would be one of the first to open, since his company has already been building relationships with cultivators. His California-based enterprise will bring its experience with home delivery to a rural part of Utah that can benefit from it, he noted.

“This is a good region for us to flex the muscles that we’ve exercised the most,” Lams said in a phone interview.

All cannabis distribution in the state will be in the hands of these private pharmacies — a departure from Utah lawmakers’ original vision for the program. The Utah Medical Cannabis Act passed by the Legislature in December 2018 called for seven private retail sites but also tasked the state’s health departments with dispensing the substance.