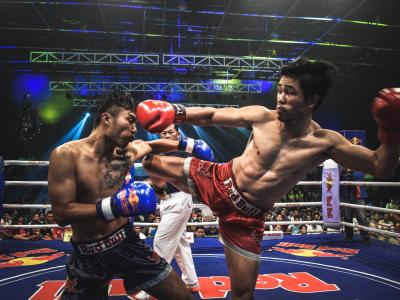 Roman Mironenko’s story as a professional mixed martial artist is a familiar one. After some career-high points, including a stint on the Russian reality show Mixfighter, he retired to train and teach Brazilian jiu-jitsu (BJJ) in Marseille, France. But due to the intense pain from a disc herniation from his competing days, his training was sidelined for months. He eventually found relief in a CBD oil he took sublingually twice a day. In time, he was able to return to BJJ training.

Mironenko’s story is just one of many where professional and amaeteur fighters use CBD to help recover and protect their bodies from the physical and psychological toll of mixed martial arts (MMA).

It’s a trend that MMA fighters find themselves ahead on compared to the rest of the sports world. Writing for the Telegraph, longtime fight sports journalist Gareth Davies argued that MMA athletes looking for pain management and “neuro-protective plusses” to protect against traumatic brain injuries had anticipated the CBD trend ahead of most other athletes and sports organizations.

The trend became all the more evident when major MMA organizations began endorsing CBD wholeheartedly. In June of 2019, Bellator MMA, one of the largest MMA promotion companies, announced it had partnered with cbdMD, a CBD products brand that also sponsors professional fighters Chael Sonnen, Jorge Masvidal, and Daniel Cormier.

A month later, the Ultimate Fighting Championship (UFC), the largest and most successful MMA promotion company in the world, got into the mix when the UFC Performance Institute and publicly traded Canadian giant Aurora Cannabis announced they would be partnering up to clinically study whether CBD can treat the aches and pains of UFC fighters. The findings will be used to develop a line of hemp-derived CBD topicals.

Leslie Smith, a veteran MMA fighter and one of the first female fighters in the UFC, told Weedmaps News she can’t quite remember when she first encountered CBD.

“Cannabis has always been such a big part of my life and my training,” Smith said. “I don’t know if it’s a shared love and appreciation for cannabis and healthy living that brought me to San Francisco and [Cesar Gracie] team, or if it just happened to work out that way.”

CBD enters the UFC with the “Nate Diaz rule.”

While Smith doesn’t recall when she first encountered CBD, she does remember when CBD broke to the larger UFC public. The conversation around CBD began with a fighter who, like Smith, was part of the team at Cesar Gracie Academy: Nate Diaz.

“I think it was when Nate Diaz vaporized CBD right after his fight at the press conference,” Smith said. “I feel like that was the time that it really meshed the use of CBD in the fighting community … and the general public.”

In August of 2016, following his rematch with Conor McGregor at UFC 202, Diaz was seen using a vape cartridge at the post-fight Press Conference. Dosing with CBD after a fight or sparring session is something that Smith practiced as well, using a 5,000-milligram full-spectrum tincture from Alpha Cannax.

“I definitely take it after any sparring session. Any time that I’m sparring and my head is getting hit,” she said. “I take it immediately after the practice, and then I take it again at night time. Basically, for as long as I’m feeling fuzzy.”

At the time, however, all cannabinoids, including CBD, were banned during competition and the incident was flagged by the media as a potential doping violation. Debate about whether Diaz had violated a rule ensued. This resulted in the creation of the so-called “Nate Diaz Rule” in 2018, under which CBD is allowed during competition even if other cannabinoids are not.

At open workouts before his match up with Anthony Pettis at UFC 241, Diaz found himself the subject of media scrutiny once again when he lit a joint and passed it to fans in the crowd. Diaz claimed it was CBD flower, but either way, the use of cannabinoids was well outside the bounds of the in-competition period.

While CBD is gaining in popularity among fighter athletes, they are still cautious about how and when they use it when training and recovering. CBD’s emergence has come at a time when concern over tainted supplements, false positives, retroactive sanctions, and potentially canceled events is at an all-time high.

The Diaz brothers' regular conflict with, and sanctions from, officials have been noted by their fellow athletes. In the run-up to a recent bout in Oklahoma, Smith switched her CBD supplement as a precaution.

“The commission there in Thackerville does not allow you to have any metabolites in your system at all,” she said. “Even the small amount that would show up inside of the [Alpha Cannax] full-spectrum CBD would have cost me some money and gotten me some bad publicity. So I was taking Game Up Nutrition as I was getting ready for that fight.”

The fear of testing positive for THC from taking a CBD product is a sentiment echoed to Weedmaps News by John Kelly, the head coach and owner of Live Free Crossfit, and the fighter he trains, UFC heavyweight Jairzinho Rozenstruik.

“These guys work really hard,” Kelly said. “If for some reason they get popped for THC when they were trying to take a supplement, then it’s going to destroy everything that they worked towards.”

Finding trust in a CBD product that will both work and not cause a fighter to run afoul of the rules is paramount to fighters interested in using CBD. After some research, Kelly opted for Cannafornia CBD for Rozenstruik’s training. “I looked into the company pretty deeply and I saw all the third party testing, and I saw that there were very low levels of THC,” Kelly said. “So that was one of the deciding factors that made us go with [Cannafornia], was how clean the product was.”

Rozenstruik is also one of the top tier UFC athletes sponsored by Cannafornia CBD. Others have included Derrick Lewis and — until a falling out in December — Colby Covington, who Cannafornia CEO Paul King told Weedmaps News was the first fighter he decided to work with after the pair met in Miami. King said that Kelly works as the strength and conditioning coach for three of six fighters sponsored by the company.

Rozenstruik uses CBD as a topical rub before and after training, and orally before bed. His dosage is approximately 33 milligrams, which is doubled after intense training sessions.

“It helps, especially when you do strength training and your body gets sore,” Rozenstruik said. “I use the cream on my body and it really helps me recover really fast.”

One of the most productive ways to use CBD is as a way to find balance in a fighter’s training, according to Kelly. Using CBD to find the range between not being overtrained or undertrained is what allows athletes to optimally perform on fight night.

“It’s all about homeostasis,” Kelly said.