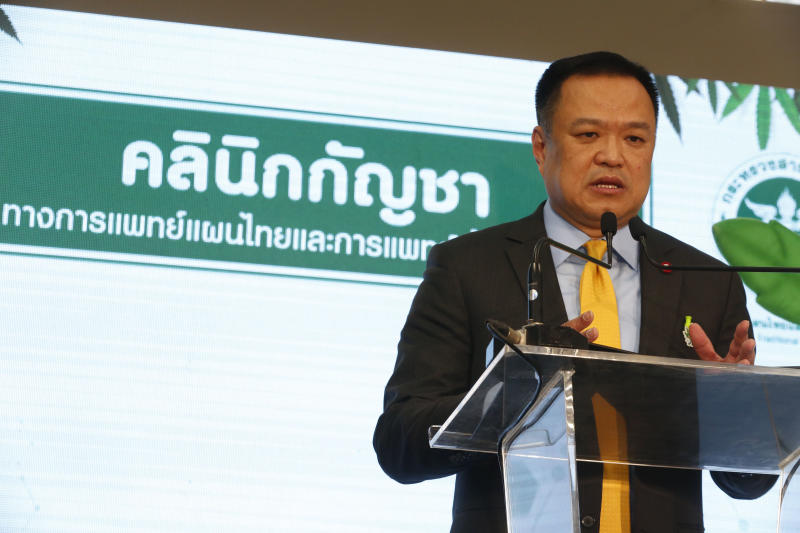 Thailand opened its first full-time clinic specialising in traditional and alternative cannabis-based medicine on Monday, as part of a move by the government towards developing a medicinal cannabis industry.

„This is a pilot clinic, because we cannot produce enough doctors with expertise in cannabis,” Public Health Minister, Anutin Charnvirakul, told reporters at the opening ceremony in Bangkok. Patients will receive treatment free of charge for the first two weeks, he added.

Thailand, which has a tradition of using cannabis to relieve pain and fatigue, legalised marijuana for medical use and research in 2017 to boost agricultural income.

There are already around 25 cannabis clinics attached to general hospitals around the country but, unlike the newly-launched pilot clinic, they operate for just a few days a week due to a lack of specialised staff.

Cannabis production, cultivation and sale has been limited to licensed Thai producers for the next four years to protect the domestic industry. Currently, only hospitals and research facilities are allowed to apply for cannabis production and extraction licences, but the government is reviewing regulations to enable Thai businesses to apply for permits.

Last year, Thailand dropped cannabis and hemp extracts from its narcotics list and proposed a draft law that would allow each household to grow six cannabis plants.

Four types of drugs, containing different combinations of cannabidiol (CBD) and tetrahydrocannabinol (THC), the psycho-active ingredient in cannabis, were given to patients to treat migraine, insomnia, neck pain and muscle stiffness, the ministry said in a statement.

The pilot clinic, based in the Ministry of Public Health, expects to see between 200 to 300 patients daily.

„Today marks the beginning,” health minister Anutin said at the launch of the Bangkok clinic.

„We are fighting for the better health of Thai people and fighting for a better economy,” he told AFP, standing next to a marijuana leaf mascot wearing a doctor’s coat.

Hundreds of mostly elderly Thais waited to receive the 5-10 mg vials of oil for muscle aches, though some came bearing more serious ailments — like Natjuta, born with cerebral palsy and confined to a wheel chair.

„She does not sleep well which causes me not to sleep either,” said the 60-year-old. „She is more calm now, so I think it works.”

„I was worried at first, but I studied the effects and decided it was better because its natural,” said Waraporn Boonsri, 69, who received four vials of cannabis oil to help her sleep.

Nearly 2,200 patients have registered at the clinic until March, a health official told Reuters. Mr Anutin said there were plans for 77 clinics to be opened across the country, with one in every province.

Mr Anutin, a construction tycoon-turned-minister whose Bhumjaithai party rode a pro-marijuana platform in last year’s elections to become a major player in parliament, has promised an economic bonanza to his rural constituents.

He added that the drug has been „de-stigmatised” in Thailand.

„If we talk about cannabis extraction, I have a sense people view it as medication rather than it being a narcotic,” he said.

Medical research has shown that cannabis oil can help ease the pain of patients suffering from conditions such as multiple sclerosis and epilepsy, but the science is out on its impact on other serious diseases including different forms of cancers.

Recreational use and trade of marijuana is still illegal and could land anyone caught with a joint with severe penalties of up to 10 years in prison.