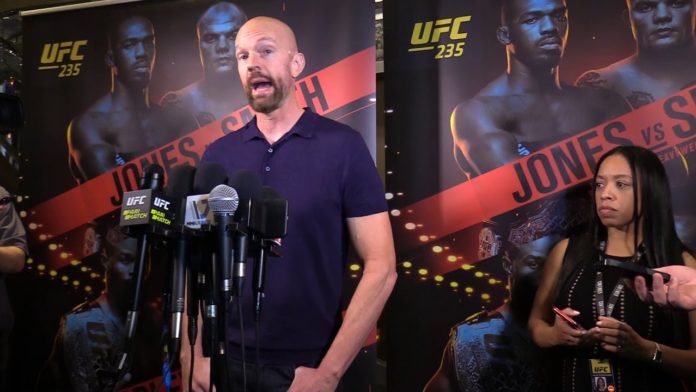 UFC athletes can breathe, or at least smoke, a little easier thanks to changes in USADA’s approach to sample collection, which has an upside for THC users.

2020 will see a new pilot program from the U.S. Anti-Doping Agency continue — and that’s good news for fighters who like to partake in a certain recreational drug. USADA, who oversee the UFC’s Anti-Doping Policy, have been piloting an oral fluid testing method, launched in December 2019, that is touted as less invasive and pain free for athletes.

While UFC fighters are generally accustomed to a fair amount of pain in competition, anything to make test collection easier would seem to be a good thing. But this week, Jeff Novitzky, UFC Senior Vice President of Athlete Health and Performance, let slip another added benefit: the testing method will only detect substances prohibited in-competition, such as marijuana (and THC, the main psychoactive component of cannabis) within hours of use, rather than days or weeks.

In other words, if an athlete decided to smoke weed a week out from a fight, they no longer need to worry about a suspension.

UFC program has started piloting a new collection method (oral fluid). Biggest upside…it potentially will only detect use of in-comp prohibited only substances (like marijuana/thc) within hours of use…not what athlete did a week or month ago. https://t.co/DHV6Ds6fiC

In a follow-up response to CombatSportsLaw.com author Erik Magraken, Novitzky added that the new process “gives an objective measurement of impairment. If it shows up in oral fluid, it was used in close proximity, and athlete is likely impaired.”

In another words, unless you’re walking to the cage high, you’re likely safe.

This, of course, only applies to those under the USADA pilot, which began December 11, 2019. A statement provided on the USADA website notes the benefits of oral fluid collection as opposed to other methods.

Marijuana usage among MMA fighters (and other sports) has long been a point of contention, especially as states like Nevada and California, along with the entirety of Canada — hotbeds for MMA — have decriminalized use of the drug, both for medical and recreational purposes. Notoriously, Nick Diaz was once suspended five years for alleged use of the drug by the NSAC. The case was eventually settled, and the suspension reduced to 18 months, but not before fans had decided they’d finally had enough.

At the 1998 Olympic games, Canadian snowboarder Ross Rebagliati was allowed to keep his gold medal, despite testing positive for marijuana/THC. The crux of his argument was that he hadn’t used the drug in over a year, but had been around it, meaning second-hand smoke was behind it showing up in his system.

Yet despite that high-profile case, and the knowledge that THC remains in a person’s system long after exposure, anti-doping programs failed to keep up with the times. With luck, USADA’s new approach will help change that — although whether the alphabet soup of athletic commissions follow suit remains to be seen.