In the ongoing chaos of hemp’s legalization that has sent marijuana prosecutions plummeting, Texas has encountered a 3,350-pound problem.

Last month, a Texas Department of Public Safety trooper arrested a driver who the agency claimed was hauling more than a ton of marijuana through the state near Amarillo. Aneudy Gonzalez was jailed for nearly a month on federal charges and the plant material was seized. But last week, the 39-year-old was released from jail, his case was dismissed and the cargo is expected to be returned.

The reason? Lab results indicate the substance was not marijuana, but legal hemp.

In legalizing hemp production last year, state lawmakers narrowed the definition of marijuana from the cannabis plant to cannabis with more than 0.3% tetrahydrocannabinol, or THC, the ingredient in the plant that produces a high. Any cannabis with less than that amount of THC is hemp, which is used in products like clothing, twine, protein powder and CBD oil.

After he was pulled over, Gonzalez showed the trooper a lab report indicating the cargo met the state’s new legal definition of hemp.

He was arrested despite the report — and Texas’ hemp law that says the state’s policy is not to interfere with interstate commerce of hemp. It also says law enforcement can’t seize cannabis or arrest anyone without probable cause that the substance is marijuana, not hemp. Gonzalez’s attorney argued showing the lab report of legal THC levels took away that probable cause.

In a statement, DPS said the trooper believed the material was marijuana based on his training and experience.

“The trooper arrested Mr. Gonzalez, and following further questioning by a [U.S. Drug Enforcement Administration] Task Force Officer, the DEA Officer adopted the investigation and took custody of Mr. Gonzalez and all evidence,” the agency said.

The Texas agency then pointed to the DEA for further details. A spokesperson for the DEA did not respond to questions Tuesday.

Because the state law legalizing hemp is new, Texas officials are still in the process of creating regulations for hemp transportation and farming. In the meantime, law enforcement officers are finding what they believe to be marijuana in their day-to-day interactions. Gonzalez’s lawyers say officers need more training on the law so they won’t wrongfully arrest people. Though Gonzalez’s case is dismissed, his lawyers said they will pursue a civil lawsuit for his arrest and detention.

On Dec. 6, Gonzalez was driving a rental truck on Interstate 40 east of Amarillo when he was pulled over for driving on the shoulder, according to a criminal complaint. The DPS trooper, smelling what he thought was marijuana, searched the cargo hold and found thousands of pounds of “green leafy substance” in boxes and black trash bags. 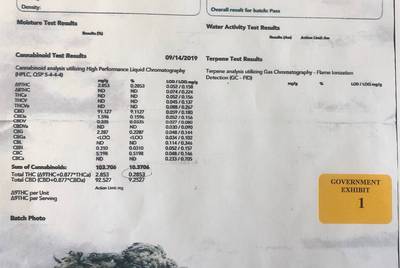 Gonzalez gave this lab report to the DPS trooper who pulled him over to show his cargo was legal hemp, according to his lawyer.

Gonzalez told the trooper he was a contract driver paid $2,500 to transport hemp from a California farm to a New York company. The lab report he gave the trooper indicated the THC content of his cargo was less than 0.3%, according to a court briefing filed by Gonzalez’s lawyers.

Still, Gonzalez was arrested and jailed on federal drug trafficking charges that could have potentially kept him in prison for life.

He had already been arrested in Arizona that trip and spent the night in jail there, his lawyer said, but was released the next day with his cargo when Arizona officials determined it was legal hemp. In Texas, he spent nearly a month in the Randall County Jail in custody of the U.S. Marshals Service.

“So he spent Christmas in jail away from his family and kids,” said Adam Tisdell, a cannabis criminal defense attorney in Amarillo representing Gonzalez.

After the plant material was tested at the DEA’s Dallas crime lab, federal prosecutors asked the judge on Thursday to dismiss the case, and Gonzalez was released from jail. His release was first reported by local TV news stations.

Gonzalez’s attorneys said his case represents a much bigger problem for Texas and the country after legalizing hemp, arguing it could lead to the end of illegal marijuana.

“They legalized a plant that has a distinction that’s invisible to everyone except a machine,” Tisdell said. “Aneudy got searched because they smelled marijuana. Well, they can’t smell marijuana anymore. They can smell cannabis.”

Texas crime labs have been scrambling to catch up to hemp’s legalization since the state law was enacted in June, unintentionally putting pot prosecution in limbo throughout the state. The state’s public labs can currently tell if a plant substance has THC in it, but not how much.

Following the DEA’s method produced after the federal bill legalizing hemp passed in 2018, DPS and local public crime labs are expecting to roll out a test early this year to determine if a plant material has a THC concentration of above or below 2%. Though above the legal cutoff, officials have said the number should satisfy law enforcement since nearly all plant marijuana prosecutions involve THC concentrations of 12% or higher.

Even with the testing, prosecutors and the crime labs, already backlogged, will have to prioritize what cases should take up their limited resources. Marijuana was not always tested because circumstantial evidence, like the smell and evidence of smoking the material, was enough to hold up in court. The El Paso district attorney has argued circumstantial evidence is still enough. But many prosecutors are now requiring lab reports to pursue criminal charges.

In the confusion, uninformed officers can lead to unlawful arrests, Gonzalez’s lawyers said.

An Amarillo police officer on a federal drug task force involved in Gonzalez’s detention testified in court a week after the arrest that he couldn’t say if hemp and marijuana smells the same, according to Gonzalez’s briefing. The officer also said he was confused about the new law when he mistakenly thought the hemp cutoff was 0.03%, not 0.3%.

He acknowledged that “he had never in his career been presented with a lab report by a marihuana trafficker,” the briefing states.

“We’re just going to have a bunch of unlawful arrests. I think that’s how this plays out,” said Daniel Mehler, a Colorado cannabis attorney representing Gonzalez with Tisdell. “In an ideal world… we wouldn’t see them doubling down on this.”