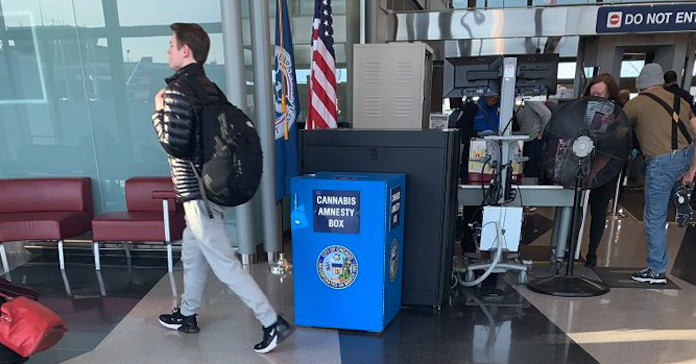 Travelers at either of Chicago’s airports may have noticed something new while passing through security after the holidays.

The bright blue cannabis amnesty boxes were installed at the end of every TSA checkpoint at O’Hare and Midway airports after weed was legalized on Jan. 1. The boxes are owned by the Department of Aviation, but serviced by the Chicago Police Department, said Maggie Huynh, a CPD spokesperson.

The boxes provide travelers leaving Chicago a place to dispose of pot before hopping on a plane, as it’s illegal to carry it across state lines. But even though marijuana is still illegal under federal law, authorities have no intention of arresting people caught with the drug at Chicago airports.

Instead, TSA says it will defer to police if they find someone carrying pot. And Chicago police, while advising against traveling with the drug, say they won’t arrest you if you aren’t carrying more than what’s allowed under the new law.

So, right after security at O’Hare airport, there’s now a bright blue „Cannibas Amnesty” drop box. Like, you can take it thru security but they remind you it isn’t a good idea to take it to other states?

No indication where it goes from there, though…

So why should people use these blue boxes instead of, say, a more discreet trash can? Because only officers can access and empty them, Huynh said, which can help keep pot and related products out of the wrong hands.

The boxes are being regularly checked and cleared by police. If cops find any weed in the boxes, they write up a report and inventory, then dispose of the pot just like they would narcotics.

But are people really using these? Chicago police says the boxes are being used, though they couldn’t say how frequently.

What’s it take to get hired as an amnesty box emptier?