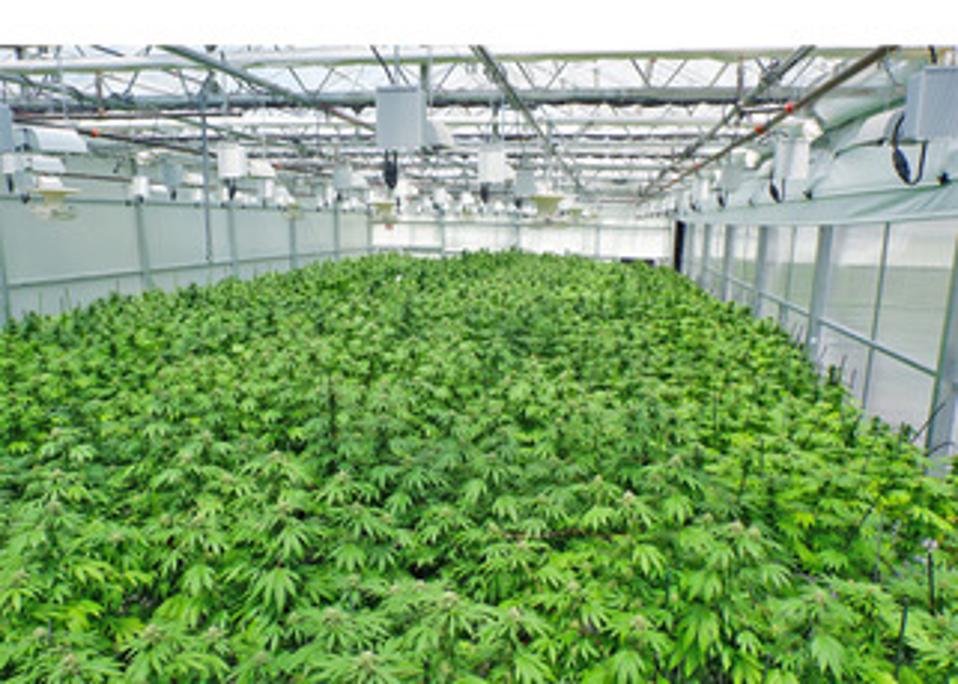 If more technologically advanced ways of growing marijuana do exist, the legalized cannabis industry’s largest players don’t need to know about them.

The Aurora Sky farm in Alberta, for example, has reached near science-fiction levels of sophistication – it’s an 800,000-square-foot hybrid greenhouse where robotic arms hoist massive pallets of plants on to cranes and conveyor belts while inspection drones buzz overhead – but alas in such a highly regulated market there aren’t enough distribution outlets to absorb such mass production.

Digitally smart, robotics-abetted facilities run by Canadian mega-cultivators such as Aurora Cannabis may be ahead of their time but that’s only in terms of the grow phase. When it comes to the post-harvest, there’s room for innovation. “The tech is getting closer but we’re not there yet,” said Michael Sassano, CEO, Solaris Farms, a cannabis cultivator based in Las Vegas.

Existing machine trimmers aren’t cost effective (on a per-pound basis relative to human labor) because they can damage too many precious trichromes, which are the barely visible crystal-like hairs covering the buds, secreting the cannabinoids (chemicals i.e. THC/CBD) that intoxicate/heal.

Woburn, Mass.-based Bloom Automation has cut itself a niche automating the cannabis harvesting process. The startup designed human-collaborative robotic trimming technology and is reportedly in discussions with at least one “Big Cannabis” player.

The current capabilities of today’s new age pot growing gorillas – Aurora, TGOD, Tilray, Hexo and others – right now could keep the entire world’s population of pot users high for a few years. Canopy Growth, with its international footprint and 35% Constellation Brands’ backing, expanded Tweed Farms in Southwestern Ontario into a nearly one-million-square-foot greenhouse in Southwestern Ontario; while that’s a lot of glass, the grow is older school. Canopy does run a cannabis-related accelerator program in Boulder, Colorado, germinating cannabis-tech startups (such as Bloom Automation).

For growers, the most urgent technology needs and compelling cost-savings opportunities are harvest-related. Despite mechanized seed-to-bud efficiencies, the post-grow clipping and trimming of leaves and stems is largely done by hand.

Any truly cutting-edge cutting system – say, one that combines computer vision with lasers – has to be affordable, fast and reliable, according to Solaris’ Farms Sassano.

“I have not yet seen anything with these three components that can do a high-end trim as good as a hand trim,” he insisted.

Ideally, growers wouldn’t have any humans involved in the Solaris post-harvest period because of the higher risk of contamination. If the farm could it would completely automate the post-harvest phase and reassign employees to inspection duties. But it can’t. Not yet, anyway.

When the annual Marijuana Business Conference (“BizCon”) was held in Vegas this past December, Sassano hoped that some vendors would bring some commercially viable trimming solutions but this was not the case.

Sassano is a former Wall Street banker. He has spent the better part of the past decade searching for best-of-breed commercial agricultural techniques, studying growers’ success and failures like the edge-seeking trader he used to be. Coming out of the venerated Lehman Brothers broker-training program during the mid-1990s, Sassano got into market making at what was then CIBC World Markets. Starting in 2004, Sassano, moved more into banking and then real estate before setting his sights on start-up investing, which in turn led him to stake out legal cannabis at its apex. He would become an early stage investor in several cannabis companies.

Following the financial crisis, Sassano took a sojourn around the world to visit large-scale traditional greenhouse grow facilities seeking the most interesting technologies to be repurposed for cannabis production. His quest took him to Washington State, Canada, Guadalajara, Brazil, China, Kuwait, UAE, Netherlands, to name a few of his stops. “Literally, I went to 100 greenhouse growers,” he said, retracing the roots of his privately held startup company of which he is managing partner.

In 2016, Solaris designed and built one of the largest-scale hybrid greenhouse projects in Nevada’s history. „Grow technology for cannabis has become highly sophisticated,” he said, referring, in part, to hybrid-greenhouses, which are walled, temperature-controlled structures with clear roofs.

With a workforce of 40 people, Solaris uses natural light as well as digitally controlled combinations of HPS bulbs and LEDs. All of the many desert-growing lessons, acquired from peers and first-hand, are being poured into Solaris’ ever-expanding facilities located near the North Las Vegas Airport, about three miles from the Strip. Construction is underway on another 150,000-square feet of grow space. When completed later this year, “Solaris 2.0” will be a 350,000 square-foot hybrid greenhouse replete with computerized video plant surveillance and specialized grow-benches that create their own cooling and heating airflow.

Solaris is one of only a handful of state-approved cannabis greenhouses. This year, the farm expects to supply as much as six tons of pot to Nevada dispensaries. Annual cannabis (combustible and edible) sales in that state are estimated to be about $750 million. By 2021, Solaris’ tonnage output is expected to more than quadruple so that it might supply some 5% of the state’s combustibles (expected to exceed 1 million pounds by then). “We spent one full year perfecting the genetics and now we are ready to scale up,” Sassano said.

As far as post-harvest technology, Sassano does believe there is a promising future for laser-guided trimming. Other opportunities for machine builders could be in the area of automated weighing and packaging and contamination control, he said.

Solaris has a lofty goal in that it wants to efficiently and inexpensively produce quantity without sacrificing quality. The current operation, mixing some automation with human artisanship, indeed can produce a pretty potent strain (yielding THC content of more than 28%) and with the kind of superior taste and aroma (terpenes) which conceivably could garner them a High Times award.

Solaris’ full-time teams of $15-an-hour trimmers, donning surgical garb, are able to do what machines can’t — that is, tenderly tend to flowered buds. One great trimmer alone can process up to 21 pounds per day, Sassano said. 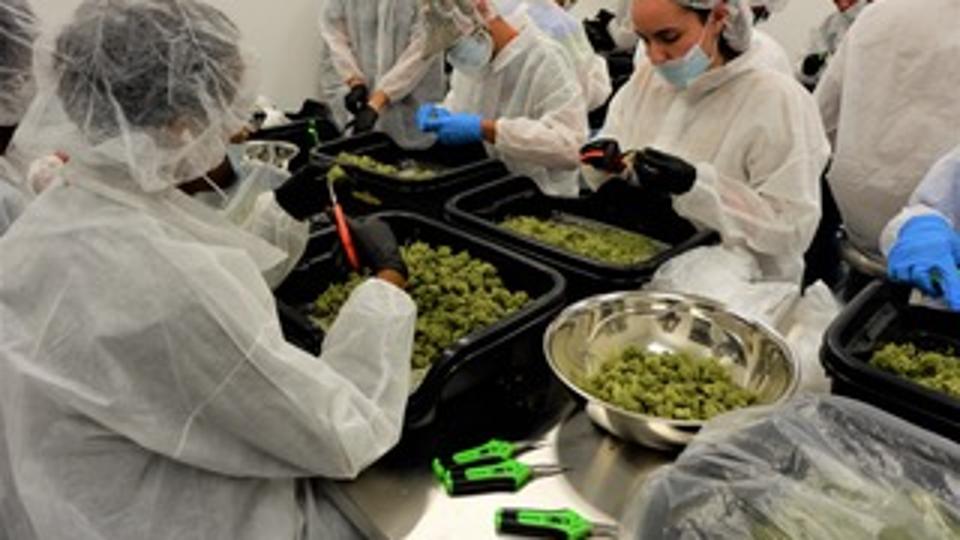 A team of trimmers carefully do what machines can’t -gingerly cut leaves and stems.

Mega-growers are less concerned about accolades and more fixated on meeting rigid governmental standards on THC levels. They prioritize the consistency, not the kindness, of the buds that they mass produce.

Cannabis companies have taken a beating in terms of their share prices of late but the sector’s long-term outlook (at least for those companies with sufficient cash flows to get them through the next 12 to 18 months) seems bright. New York State Governor Andrew Cuomo just declared his goal to make pot legalization a state priority and to make the Empire State a hub of cannabis innovation. Changes to U.S. federal laws could remain a mere pipe dream for an industry that overshot on demand forecasts; but then, as history has shown, when winds of change do finally blow, they can do so quickly.

Annual legal marijuana represents a $10 billion industry in the U.S., according to New Frontier Data, a cannabis market research and data analysis firm. Canada is the second largest market (around $2 billion).

In 2018, some 250,000 people were employed growing marijuana plants, New Frontier said. Tens of thousands more work in related fields. Take, for instance, LED companies, which now cater to the cannabis industry as more states legalize pot, according to Wired.

Cannabis industry jobs (”trim crews”) could be lost to automation, particularly if mega-scale growers solve the post-harvest puzzle. But relatively less enormous, high-test bud growers, such as Solaris, keen on tender-loving-care quotients, likely will hire more, not less, people, regardless of what technology advancements may come.

One of the reasons that Solaris built its farm close to downtown Vegas and the city’s second-busiest airport: to attract workers.