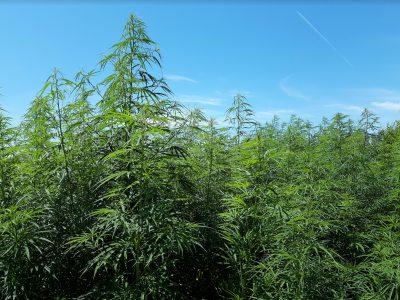 Change is happening rapidly in rural states these days, and Kansas is no exception. Intense weather events and damaging tariffs are directly harming farming communities, while rural health disparities have become a nationwide area of focus and investment. With expanding sustainable technology and manufacturing sectors of its economy, the “Free State” is growing in exciting ways. At the same time, citizens are still witnessing attempts to stifle progress under the guise of higher moral judgment. An example has come from the “old guard” of misinformed, zero-tolerance proponents of the drug war. There are decision-makers who, on the one hand, approved of an industrial hemp law in 2018, yet those same people maintain that regulating or decriminalizing cannabis (even for medicinal purposes) is completely unacceptable.

To show just how out-of-touch this perspective is compared to public opinion, we must turn to localized data. According to the recent Kansas Speaks Fall 2019 Statewide Opinion Survey from Fort Hays State University and Docking Institute, “61.3% of respondents ‘strongly support’ or ‘somewhat support’ legalizing recreational marijuana for individuals 21 and older.” Suffering patients and their caretakers have especially grown tired of being ignored by opponents, causing many longtime Kansans to leave the state indefinitely.

Signaling a continuing shift in paradigms, two years ago the spring 2017 survey reported overall support for adult use was 50%. The report had an additional question specifically regarding medical cannabis. That year “over three-quarters (76%) of respondents at least ’somewhat support’ medical marijuana, while 14% of respondents at least ‘somewhat oppose.’ Of the political categories, only the strongest Republicans were more likely to oppose than support allowing medical marijuana.”

After watching Kansas become surrounded by three legal states and a fourth on the way, people are asking if current lawmakers can even reach an objective consensus. What we do know is while legal states are documenting both benefits and issues with changing law structures, data is consistently showing legalization is working. The good news is, those unwilling to acknowledge the failures of prohibition or protect public health and safety by updating policies are dropping in number, and influence.

Options On The Table

During this past October, a special committee on federal and state affairs heard testimonies and discussed crafting a medical cannabis bill to introduce into the Kansas House and Senate. Between two different meetings more than sixty-five testimonies were submitted, but only a fifth were opponents of legalization. The change in societal perception about cannabis had been especially slow in the Bible Belt, but Kansans’ approval has now been demonstrated.

The 2020 Kansas legislative session begins in January with a full agenda. Even though other important policies may take priority on the surface, with it being an election year and thanks to committed advocates, there is bipartisan support to enact significant change. Lawmakers have heard from multiple sides about cannabis for years, but the momentum has never been stronger to make meaningful changes. It will still be up to constituents to apply respectful pressure to their elected officials, so they understand it is a priority that demands follow-through.

While the legislature has their own process, many people are now talking about one statewide action that could be taken sooner. It would have significant and immediate impact if Governor Laura Kelly followed the example of Oklahoma Governor Kevin Stitt by encouraging pardons for nonviolent crimes. In an important step towards criminal justice reform, over 500 inmates were recently pardoned in Oklahoma from specific possession or property crime. The Kansas Constitution states that under executive power of the office, “pardoning power shall be vested in the governor, under regulations and restrictions prescribed by law.” The state’s website devoted to civic engagement further defines this authority to include “granting pardons to convicted criminals.”

A recent editorial, which did not represent data fully, claimed it is only a myth Kansas prisons are overcrowded with people charged for “marijuana possession.” However, the piece failed to mention a move such as pardoning or approving expungements is not to be underestimated. At the very least it would indicate an alignment with evidence-based domestic and global pivots towards rehabilitation instead of punishment, compassionate release, and accepting the responsibility of institutions to protect human rights. Such an action on behalf of the governor would support much-needed societal reintegration efforts for every population affected by the failed war on drugs, and rebuild trust through empowering communities. For many in Kansas it seems for too long the motto “Ad Astra Per Aspera” (To the Stars Through Difficulty) has represented imposed barriers.

A different but related topic of reform in the Sunflower State is the reintroduction of industrial hemp. In the program’s first year, over 200 licensed farmers grew and harvested over 1,700 acres statewide. According to the Kansas Department of Agriculture, in 2019 approximately 90% of hemp acreage was grown for flower and cannabidiol (CBD) oil. After having conversations with producers, processors and retailers from every part of the state, it is easy to tell hemp is here and it is not going anywhere. With the amount of biomass now on the market, plus the intense horticulture techniques necessary for quality CBD production, there is already movement among some farmers to establish dual purpose genetics. Long-term, this will help the state meet demands of the various end products and industries hemp contributes to, such as animal feed and bedding, cosmetics and personal care, textiles and clothing, construction materials, among many others.

To say it was a tough year to farm anything would be an understatement, and hemp cultivation was also negatively impacted. In fact, due to multiple factors including late and persistent rains, out of the 5,800 original acres approved roughly 2,000 acres were planted. Other commodity markets may change in time, but trends in consumer demands are undeniably in transition due to complex dynamics. Not to mention, prices for other crops are relentlessly stagnant while input costs for fertilizers and pesticides increase yearly. Farmers are left needing another option. As with anything difficult requiring a learning curve, there will always be issues communities will band together to work through. An example has been the rebuilding of a once vibrant hemp supply chain necessary to accommodate demands of producers, processors and consumers. Plants are being built in rural and frontier counties, and large-scale investments are taking place.

An important conversation occurring across the country is how the upcoming commercial hemp program under the 2018 Farm Bill will affect operations moving forward. Among nuances of the cannabis plant, cross-pollination concerns can be expected to continue until changes move forward regarding possible zoning solutions and/or statewide efforts. Ultimately, there are dozens of areas of opportunity, but more and more people are willing and excited to take them on collaboratively.

The industrial hemp research advisory board had its work cut out for 2020. The group of volunteers reviewed comments to the department of agriculture’s permanent commercial program proposal. In addition, 324 out of 330 applications were awarded licenses in the new year, which is slated to continue as a research program until USDA’s commercial approval is received. This may not be until spring or later, but producers and distributors can look forward to being grandfathered into a commercial license at that time. The total number who applied has increased from last year, and the acreage limit also increased from 80 to 320 acres. As Kansas begins a new year, there is room for cautious optimism, but the horizon is looking more positive and hopeful than ever before.

Kelly Rippel is the co-founder of Kansans for Hemp; an advisor at Bleeding Kansas Advocates; an appointed member of the Kansas Department of Agriculture’s Industrial Hemp Research Advisory Board.