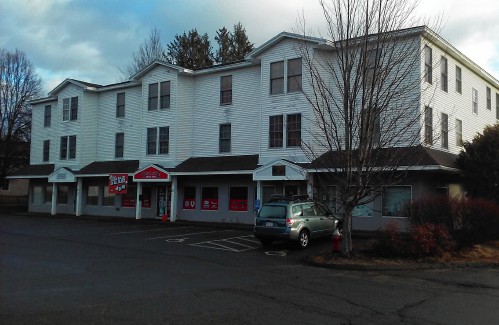 AMHERST — Municipal zoning rules that determine where marijuana dispensaries can be situated are forcing the relocation of a long-running martial arts studio from its site in the East Amherst village center.

Amherst Martial Arts, which arrived at the plaza on College Street in the fall of 2018, is expected to have its lease end this spring, said Annie Schwarz, the Tae Kwon Do school’s owner and head instructor. A recreational cannabis dispensary plans to open within 300 feet of the martial arts studio and town zoning requires a 300-foot buffer from any location “in which children commonly congregate in an organized ongoing formal basis.”

“At this time I don’t know where we will be going,” Schwarz said.

The end of the lease, with the notification from property owner Paul Shumway, comes as RC Retail Amherst LLC plans to open the Red Cardinal cannabis shop in a vacant storefront at 330 College St., last used by Green Wave Garden Supply & Hydroponics. The plaza is also home to restaurants, a smoke shop, a flooring store and a furniture store.

The martial arts studio, which opened in 1991 and was a fixture in downtown Amherst until its move to the new site, will have to again find new quarters, even though it was at the location before the marijuana shop was proposed.

Schwarz said she already got the month-to-month lease extended from November to April after discussions with representatives from the company and the town, but would likely need to have the Zoning Board of Appeals grant an exception to stay beyond that.

Economic Development Director Geoff Kravitz said the ZBA would likely take the proximity into consideration in its decision when issuing a special permit. RC Retail will go before the ZBA on Feb. 13, after submitting its application to the state’s Cannabis Control Commission.

Forcing another business to move is not unusual for a new marijuana dispensary, Kravitz said.

In North Amherst, for instance, where Rise Holdings Inc. is the lone dispensary open in town at 169 Meadow St., Kimballs Auction and Estate Services had to move to make way for the renovation of the building.

Another marijuana business, Herbology, which has yet to open, bought the building at 422 Amity St., forcing the closure of Rafters sports bar and restaurant.

Other communities have also had to deal with the issue of distance from a location where children’s activities take place. In Hadley, a marijuana dispensary application for the business now known as Heirloom Collective was initially rejected by the Planning Board in August 2016 after representatives from the neighboring Hampshire Mosque raised concern it would be too close to a place where children congregate.

The Planning Board later overturned the rejection because the mosque was still under construction at the time.

Meanwhile, the town is getting closer to having a second dispensary. Mass Alternative Care Inc. of Springfield received Zoning Board of Appeals permission to be situated at 55 University Drive, a former restaurant site. Kravitz said he believes the company is progressing toward a spring opening,

In addition, MassMedicum Corp., another cannabis business, recently had its first hearing before the Zoning Board of Appeals for use of a new building at 85 University Drive.

Does CBD Oil Have an Expiration Date? – Plants Before Pills