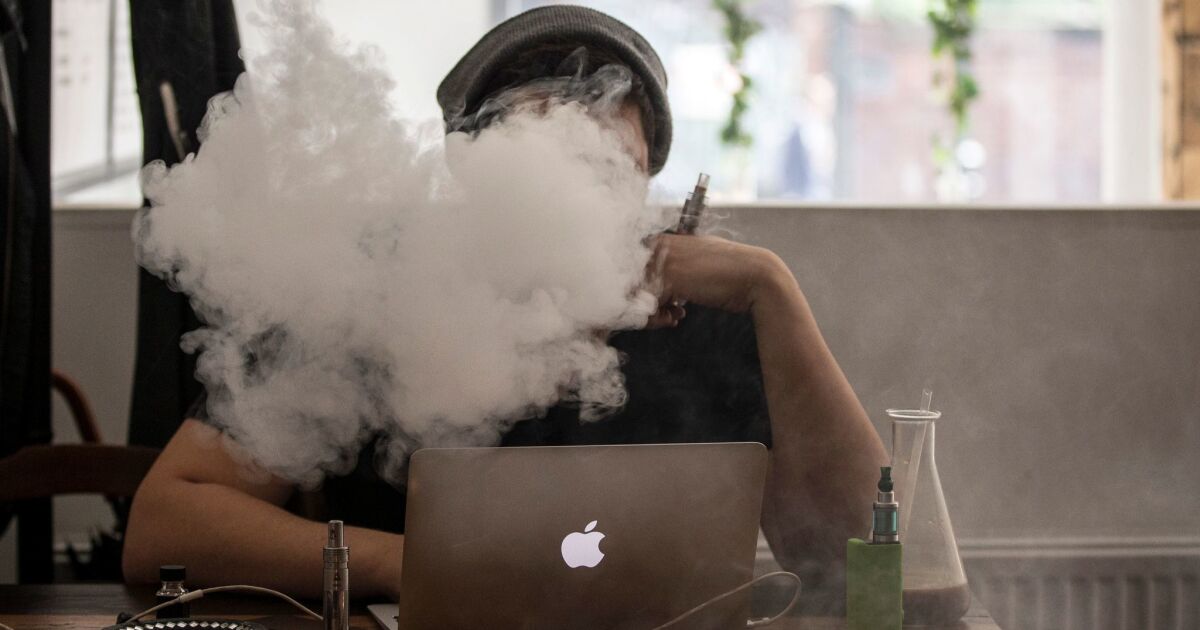 Starting last summer, very sick patients began showing up in emergency rooms all over the country with similar symptoms — mainly, they couldn’t breathe.

The outbreak peaked in September and has since slowed considerably. By mid-December, the Centers for Disease Control and Prevention reported, a total of 2,506 patients in all 50 states had been hospitalized for the condition, christened EVALI (e-cigarette or vaping associated lung injury). Fifty-four people died, most of them otherwise healthy young adults.

What soon became clear, thanks to epidemiologists, medical sleuths and the relentless reporting of the cannabis news website Leafly, was that there was a link between the illness and vitamin E acetate, a viscous liquid that can be swallowed or used topically in cosmetic creams.

Unscrupulous operators were using it to dilute cartridges containing THC oil, the psychoactive ingredient in cannabis.

“We are confident that vitamin E acetate is strongly linked to the EVALI outbreak,” the CDC’s principal deputy director, Anne Schuchat, told reporters in a telephone briefing Dec. 20. “I want to stress that this does not mean that there are no other substances in e-cigarettes or vaping products that have or are capable of causing lung injury.”

Where, exactly, were cannabis users getting these tainted cartridges?

Last week, the CDC announced that a survey of 809 patients in Illinois, Utah and Wisconsin found that most — 78% — obtained their THC-containing products from “informal” sources like friends, family or dealers, or purchased it online.

A sliver of them —16% — said they got their cannabis from brick-and-mortar commercial sources, like dispensaries, smoke or vape shops and pop-up stores.

But “commercial” does not mean “legal.” In Los Angeles, for example, black-market dispensaries outnumber legal ones.

Unfortunately, some news organizations missed the nuance, reporting that some of the tainted products were “legally purchased.”

In fact, a CDC spokeswoman said Thursday that the agency has no information about whether the commercial sources were legal. “It is not possible for us to verify … whether the source was licensed or not,” press officer LaKia Bryant told me in an email.

As you can imagine, the crisis caused tremendous anxiety and concern in California’s fledgling legal cannabis industry, where intense regulation, mandatory testing and labeling, plus an onerous tax structure, have all but guaranteed that the illicit market will continue to thrive.

Vape cartridges, which contain THC oil, screw into a pen-like, battery-powered heating element. The heat causes the oil to vaporize, and it is then inhaled. A cartridge filled with legal, licensed extract might cost upward of $35 to $60 or more at a legal dispensary. An illicit cartridge, or “cart,” can be had for $20 or less.

“We raised alarms internally right away,” said Tiffany Devitt, chief of government and consumer affairs for the Santa Rosa-based CannaCraft, whose brands include Absolute Xtracts, Care by Design and Satori. CannaCraft products, she said, contain no additives.

“We gathered a bunch of people we trusted — all our PhDs on staff and outside cannabinoid scientists to brainstorm possible culprits.”

While initial suspicion had fallen on e-cigarettes and their flavoring agents, the CannaCraft team theorized very quickly that the illicit cannabis market was to blame. And not just because of vitamin E acetate. They also worry that synthetic cannabinoids, which can be difficult to test for, may also be involved. (The synthetics go by names like Spice, bath salts and K2. You’ve read the horror stories.)

“Let’s say I am a bad actor, have crappy weed laden with pesticides,” said Devitt. “I want it to go a long way, so I extract the oil and dilute it with vitamin E acetate. But now it’s not very potent. If I throw a bunch of synthetic cannabinoids in there, it’s very potent and very cheap.”

And very, very dangerous. (CDC Chief Science Officer Brian King said the involvement of other chemicals in the vaping-related lung illness has not been ruled out, but he has no findings to report with regard to synthetic cannabinoids.)

And just because a supplier is doing it the legal way, that doesn’t guarantee untainted product. Currently, California doesn’t require testing for vitamin E acetate, though some licensed producers like CannaCraft began testing for it last summer to allay consumer fears. “There’s currently nothing prohibiting it other than the knowledge of what it can do to the consumer,” said Alex Traverso, spokesman for the California Bureau of Cannabis Control.

While the EVALI investigation continues, the CDC has said “the best way for a person to ensure they are not at risk is to consider refraining from the use of all e-cigarette, or vaping, products.”

To those in the legal cannabis world, though, the warning is overly broad.

Not a single case of vaping-related illness has been linked to California’s legal cannabis industry, according to Lori Ajax, chief of California’s Bureau of Cannabis Control. Since 2018, when the law allowing recreational use went into effect, 30 million legal cannabis vapes have been sold in the state. Traverso said the California Department of Public Health was able to track the products used by sickened patients to where they were purchased. All came from the illegal market.

“Saying the word ‘vape’ is like saying ‘automobile.’ It’s a big product,” said Sallyann Nichols, president of Bloom Farms, which began as a vape company in 2014 and has since branched into other products, like flowers. “When Toyota had a brake problem, they didn’t say, ‘We are going to ban all automobiles.’”

As terrible as the EVALI crisis has been, she said, “the first and biggest crisis is the fact that there has been close to no crackdown on illicit sales. The crisis does not exist for legal cannabis; it exists for regulators and their absence of strategy.”

But for every illegal dispensary they close, it seems, another pops back up. No surprise: South Los Angeles is the most impacted part of the city.

Cannabis users who value their health are going to have to be willing to pay more. But they must also educate themselves about whether a manufacturer, retailer or delivery service is legal.

Last year, the state launched a campaign, #WeedWise, that encourages consumers to find and scan a dispensary’s QR code with their smartphone. The code links to the bureau of Cannabis Control’s online license search. Alternatively, consumers can check whether their local dispensary is licensed on the agency’s website.

And if you can’t stand the idea of paying a hefty price to vape a licensed, tested, legal product, and don’t want to go to the trouble of making sure your dispensary is legit, you can do what the new recreational cannabis law allows: grow your own.