Welcome to Cultivated, our weekly newsletter where we’re bringing you an inside look at the deals, trends, and personalities driving the multibillion-dollar global cannabis boom.

If you want a discount to BI Prime to read our stories, sign up here!

Welcome to another edition of Cultivated. Last week, I moderated a panel at Green Market Report’s The Economics of Psychedelic Investing conference in Midtown Manhattan.

You can read my colleague Yeji’s recap of the event here.

A few days after the conference, hedge fund manager and crypto evangelist Michael Novogratz told a hedge fund conference in South Beach that he thinks psychedelic medicine will be the next „short-term“ bubble after cannabis. My colleague, Bradley Saacks, was on the ground we turned his comments into a quick story on the exciting new market.

In other news, cannabis companies are shaking up their C-suites as they prepare for what will be a challenging year in the industry. I interviewed MedMen CEO Adam Bierman last week, who told me that investors were right to punish his stock. This morning, MedMen announced Bierman was stepping down from the company.

And last, Leafly announced a round of layoffs this week. In November, we reported that the Seattle-based cannabis startup was paring back expenses and freezing hiring.

As always, we’d love to hear from you about what’s going on in cannabis, what we’re doing right, wrong, or otherwise. You can find out how to reach me securely below.

Investors may be eyeing psychedelics as the next big trend in healthcare.

That’s according to leaders in the medical-psychedelics field. They say there’s a serious growing interest from established backers who have traditionally stayed away from companies that deal with federally illegal substances.

Florian Brand of ATAI Life Sciences said that the investor base is composed of the visionaries, the „momentum investors,“ and more recently, pharmaceutical and biotech investors whose interest has only seriously picked up within the last month. Shlomi Raz, the founder and CEO of the medical-psychedelics company Eleusis, told Business Insider that once interest from traditional backers manifests into investment, he expects to see „the whole herd moving in.“

Cannabis companies have slashed over 1,000 jobs in recent weeks as the industry contends with a ‚toxic‘ landscape. We’re keeping track of all the cuts here.

The once red-hot cannabis industry is coming back down to earth and over 1,000 jobs have been cut across the sector as a result.

This week we added Leafly to our ongoing article tracking cannabis company layoffs. The media company has cut 18% of its workforce or 54 employees according to a memo obtained by Geekwire. Business Insider previously reported in November that the company was freezing hiring, limiting travel for employees, and reining in its holiday party.

„Today is a hard day at Leafly. We wish our colleagues the best as they pursue the next steps in their careers. We look ahead to continued innovation in service of our customers and the cannabis industry,“ Leslie said in a statement provided to Business Insider.

Millennials stopped drinking as much beer, so alcohol brands began to look to cannabis. But slumping Canadian beer sales and a tough 2019 for the cannabis industry may mean a cautious path forward.

In the first full year of adult-use cannabis in Canada, domestic beer sales plunged 3% according to data from Beer Canada.

Declining beer sales in recent years have prompted some beer giants to look at cannabis as both a threat to their market share, as well as a possible new area for investment. And this has led some alcohol brands to dip their feet in the cannabis sector with some companies – like Constellation Brands – diving in headfirst.

But for those who took the investment plunge, a turbulent 2019 for the cannabis sector – coupled with faster declines in domestic beer sales in Canada – has prompted alcohol giants to tread carefully moving forward, analysts and experts told Business Insider.

Famed investor Michael Novogratz made a big bet on psychedelics – one he expects will pay off soon.

At a hedge-fund conference in Florida, Novogratz predicted that medicine derived from psychedelic drugs will be the next „short-term“ bubble. He also said that he expects Compass Pathways, a UK-based startup working on bringing drugs derived from psilocybin which Novogratz invested in, to go public „before the end of the year.“

A spokesperson for Compass Pathways told Business Insider that „we are always looking at options to ensure continued growth and funding,“ but that the company doesn’t comment on „speculation.“

The CEO of embattled cannabis retailer MedMen is stepping down, effective February 1, the company said on Friday.

Adam Bierman, the Los Angeles-based cannabis company’s CEO and cofounder, will also surrender his Class A super-voting shares, the company said. Bierman will continue to serve on the company’s board.

Ryan Lissack, MedMen’s chief operating officer, will take over as interim CEO while the board searches for a permanent candidate.

Chart of the week

Domestic beer sales in Canada dropped around 3% in Canada’s first calendar year of cannabis legalization. Steadily declining beer sales have prompted some alcohol brands to look to cannabis, but that may not be the panacea they’re hoping for, given the challenges the cannabis industry faced in 2019. Read more about how the two industries are intersecting here. 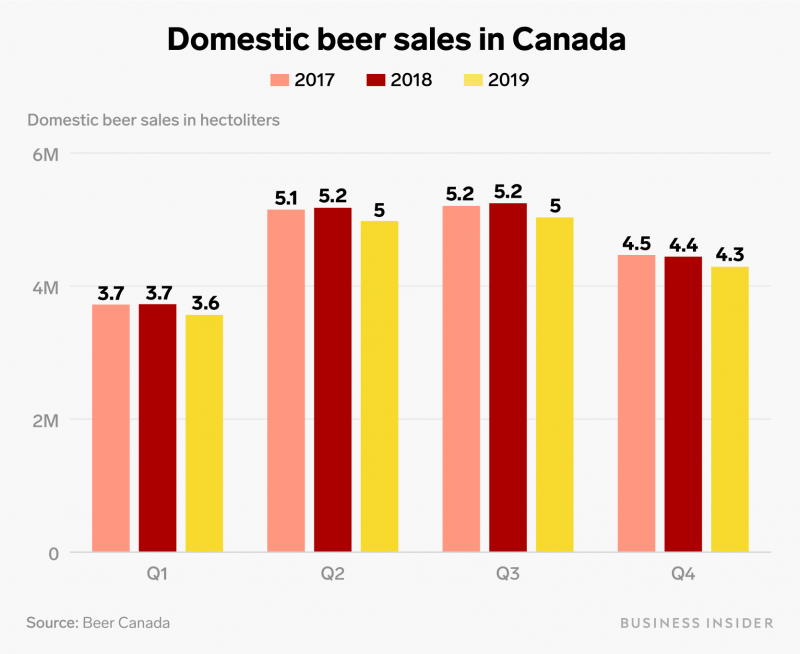 The cannabis boom could be good for science – and scientists (STAT)

Meet the Cannabis Lawyer Beating Trump at His Own Game (Politico)

Cuomo amends marijuana legalization plan, but not enough yet for lawmakers (The Buffalo News)

I Saw the Future Standing in Line for Weed in Illinois. Then I Drove Back to the Past. (Esquire)

Did we miss anything? Have a tip? Just want to chat? Send us a note at [email protected] or find Business Insider’s cannabis team on twitter: @jfberke & @jesse_yeji. You can also reach Jeremy on encrypted messaging app Signal on at (646) 376 6002.