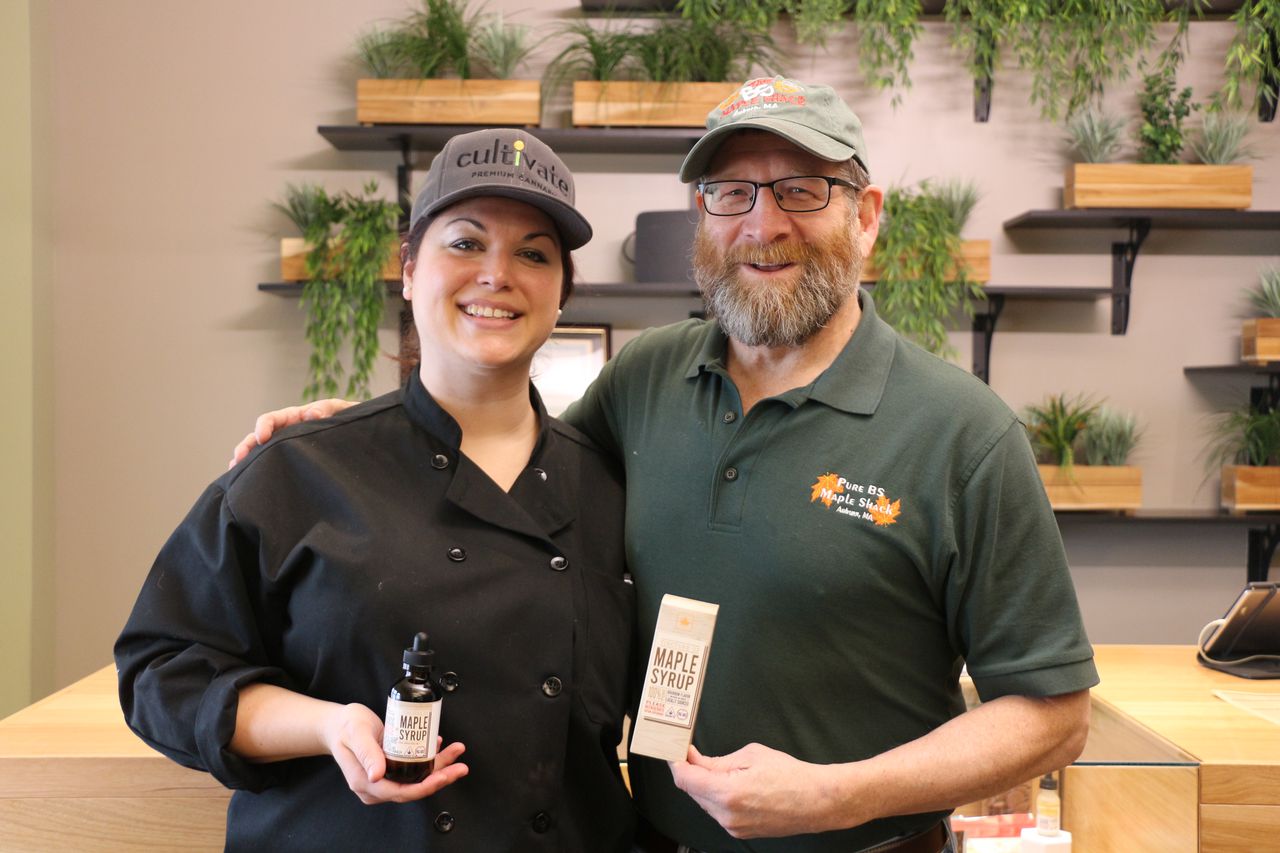 Bruce Hopper of Pure BS Maple Shack in Auburn had a vision, and it wasn’t just of his syrup drizzling onto plates of pancakes and french toast across Massachusetts.

As states across the country began to legalize marijuana, Hopper hoped there was a chance for his maple syrup to be infused with THC. When recreational cannabis was approved in Oregon, Hopper sent some of his maple products to his contacts in the state, but they weren’t able to perfect a cannabis infusion.

“I was really disappointed,” Hopper said. “It was still in the back of my mind that I really wanted to do this.”

Then, Hopper started to spread the word around Massachusetts that he was interested in getting his product into the marijuana industry. Hopper’s son helped connect him with Cultivate Holdings in Leicester, he said.

Finally, at the end of 2019, that dream came to fruition as Cultivate rolled out its infused maple syrup.

“We wanted to be able to provide a locally-made maple because we’re in New England and there are lots of different maple sap masters, per se,” said Lianne Whalen, the executive chef at Cultivate, one of the first recreational shops to open in Massachusetts.

It took months to get the syrup just right, Whalen recalled. What was difficult about creating the product was trying to come up with a natural emulsifier because maple syrup is not oil-based. That meant Whalen and her team needed to create an emulsion tincture to add to the maple syrup.

“We wanted to infuse it but not add or impart any sort of off-flavors, which is why it took so long to come up with the proprietary natural emulsion,” Whalen said.

Eventually, they got it right.

“It does have a decent weedy taste but unless you’re using it as a sublingual it pretty much dissipates once you put it on any sort of edible food that you’ll be ingesting,” Whalen said.

There’s some added bourbon flavoring to help balance the syrup on the taste buds.

Hopper said he’s tasted the infused maple syrup on its own and on pancakes.

Customers can buy the cannabis syrup at the counter at Cultivate or wholesale at other retail shops in Massachusetts. The syrup comes in a bottle with a graduated dropper. The four-ounce bottle contains almost 500 mg of THC and costs $70, Whalen said.

Hopper said the possibilities are endless.

“It’s one ‘pinch me’ moment after another,” Hopper said. “The first big thing for me was BirchTree Bread Company using it in a maple latte, and then Crystal Caves in Auburn made maple walnut ice cream and then Redemption Rock last year made a beer with my sap and Glazy Suzan made gourmet donuts with it.”

The Central Massachusetts business partnerships have been special for Hopper.

“It’s exciting not only to taste and experience these various end products but the other thing that’s been great for me is I’m getting to partner with all these fantastic entrepreneurs that all have a lot of energy and creativity,” Hopper said. “I’m just tickled to death to be part of it.”

Hopper, who lives in Auburn, has been in the syrup business for about six years.

Pure BS loves visitors, Hopper said, where there’s a chance to talk about math and science, have a taste of syrup and carry a bucket to the sugar shack.