After decades of de facto prohibition and shady streetcorner dealings, Cannabis (sativa or indica) has gone boardroom legitimate. Business is booming. State legislatures are salivating at the prospect of new revenue streams. Decriminalization is positioned as a surefire way to replenish depleted statehouse coffers.

Yet as marijuana gets most of the press and vies for consumer dollars, there’s a whole other, less sexy angle — hemp. It may be less centerfold worthy, but the possibilities are intriguing. In fact, your friendly neighborhood farmer might be dabbling in (or gone all in on) this new enterprise.

From a staple, versatile crop in Colonial America, to riding the politicized coattails of reefer madness in the 1930s, hemp has seen its highs and lows. But for modern farmers, there’s so little information, it might as well be alien in origin. It’s like hemp has been purged from the history books — I liken hemp to a forbidden tome of spells and other arcane (forbidden) dark arts that’s been lost to the ages — and we’re starting anew.

While it’s an exciting prospect to “rediscover” hemp since the hysterics have subsided, it’s also a daunting task, with plenty of gotchas along the way. How do we grow it? What pests/diseases is it susceptible to? How can we manage said pests/diseases (especially with ag protectants) if the EPA has scant few options labeled?

But from a legal standpoint, one question rises to the forefront. What about “hot” plants? And by hot, I mean too much THC. Enough THC to legally classify it as marijuana (which the Feds still technically frown upon on paper, as do some states). 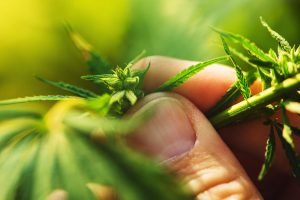 Interestingly, very little distinguishes marijuana (the joint and brownie-infused kind) from hemp, its more homely and less popular little brother. Indeed, appearances can be deceiving. To truly appreciate their uniqueness, you have to delve into their internal chemistry. Specifically, the relative levels of THC, the psychoactive (“high” inducing) component vs. CBD, which holds promise in a more subdued and (non-trippy) medicinal capacity. THC dominates in marijuana, and CBD dominates in hemp (though it still has a small quantity of THC). [Note that there’s also hemp grown for fiber, but these varieties generally have the least upside market potential.]

Conventional wisdom has always been that stress (temperature, drought, etc.) induces THC spikes in hemp, skewing the CBD/THC ratio — and possibly putting it over the top. The ceiling, as defined by the Feds, is 0.3% THC. As a result, farmers have to diligently monitor their crop at all stages. If the crop is sampled and approaches the magic number of 0.3%, it has to be harvested stat to avoid running afoul of the law (and an old fashioned field-torching at the farmer’s expense). Predictably, few farmers want to make that investment with such uncertainty dangling over their heads.

Now, if one plant tests hot, a farmer can retest by row or plant (or opt to destroy the entire crop). However, this can get pricey. Is it a justifiable cost to salvage their initial crop investment? The point of sampling is that it’s supposed to be representative of the whole, without actually sampling the whole lot.

All this insanity over an unbuzzworthy 0.3%. The ceiling seems overly harsh, especially since most marijuana is in the ballpark of 5% to 20% (or more) THC. So in essence, the standard that the Feds have set for THC “contamination” in CBD strains of hemp is over 16x too conservative.

While some Capitol Hill politicking is afoot to have the Feds revise this seemingly arbitrary cutoff (that unfairly lumps hemp farmers in the same company as “drug dealers”), a recent study has thrown the “stress causes THC spikes dogma” into doubt. Call it nature vs. nurture, with a CBD/THC twist.

A team at Cornell University conclusively demonstrated that environment has nothing to do with THC accumulation in hemp. It’s all about genetics! After growing over 200 plants at two different sites, they found no correlation between growing conditions and THC levels. But when they compared THC accumulation and genetics, they found an undeniable connection.

Turns out, cannabis plants can have two CBD genes, two THC genes, or one of each gene. Obviously, hemp farmers should steer towards the dual CBD gene varieties to avoid future heartache (burn?).

This basic info was used to develop an inexpensive, high throughput diagnostic test at the molecular level. Even better, seedlings can be tested early on. Not only is this useful from a compliance standpoint, but it can be used to screen and select for low THC varieties in the future. Interestingly, this info was used to “expose” one variety (that was advertised as “low-THC”) as a repeat, felony level offender.

Score one for science. It turns out the old nature vs. nurture debate has been settled once and for all — at least in cannabis circles. The jury’s still out on the psychological side!

Tim Durham’s family operates Deer Run Farm — a truck (vegetable) farm on Long Island, New York. As a columnist and agvocate, he counters heated rhetoric with sensible facts. Tim has a degree in plant medicine and is an Associate Professor at Ferrum College in Virginia.