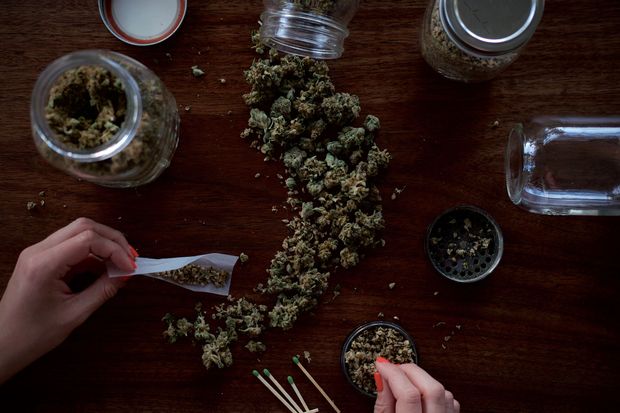 Some of the biggest cannabis companies in the U.S. and Canada could burn through their cash balances in a matter of months unless they’re able to raise funds or cut spending, according to research from the boutique investment banking firm Ello Capital.

As pot stocks plunged over the past year, big spenders like Canopy Growth (ticker: CGC), Aurora Cannabis (ACB) and Tilray (TLRY) have found that capital markets have yanked the welcome mat and forced the pot producers to cut costs. “The cannabis industry is currently entering a new period where companies are focusing on corporate governance and operational efficiency,” says Ello chief executive Hershel Gerson.

Few analysts foresaw the industry’s cash crunch. Some thought that Aurora Cannabis was even on the road to positive cash flow in 2019. But Aurora stock has fallen nearly 80% from one year ago and last week it announced drastic economies. The ETFMG Alternative Harvest ETF (MJ), an exchange-traded fund with exposure to the pot business, has shed half its value in the past 52 weeks. In 2018 and 2019 cover stories, Barron’s wrote that Canadian and U.S. pot stocks looked overpriced.

Read Next: There’s a World of Dividend Stocks Out There. And They Pay More Than U.S. Companies.

Using the latest-reported financials of 20 pot producers, Ello’s Gerson estimates that companies like Aurora and Tilray had less than 6 months of cash based on their capital spending and negative operating cash flows. Gerson’s firm helps cannabis companies raise capital, but isn’t engaged with any of the 20 public companies in his liquidity analysis and says that his firm has no trading positions in their stocks.

Gerson is more optimistic on some of the industry players. “We’re still bullish on the industry and think there are some great operations out there,” he says. “We feel positive about the industry’s long term fundamentals.”

Cannabis companies have scrambled to raise cash in recent months through stock placements or by selling and leasing back their properties. Last week, Aurora told investors that it has raised money through “at-the-market” stock sales and bank loans. To save money, it is cutting capital spending and its headquarters payroll, starting with the retirement of founder and chief executive Terry Booth.

An Aurora representative pointed to that financial update, when queried by Barron’s. Aurora told investors last week that it promised bankers that it will to turn cash flow positive by the September 2020 quarter.

“Nobody knows when that’s going to happen,” says Gerson, talking about Aurora’s spending cuts. He figures that Aurora’s latest adjustments left it with about $117 million in cash and a monthly burn rate of around $50 million. That’s 2.3 months of liquidity, Gerson says.

The analysts at Ello aren’t the only ones worried about Aurora’s balance sheet. On Monday, Gordon Johnson of GLJ Research issued his own analysis of Aurora’s staying power and concluded that it will burn through its liquidity in just over 7 months. Johnson rates Aurora a Sell.

Ello’s Gerson figures that Tilray had just under 4 months of cash, as of its latest reports. He counts $100 million in cash and a monthly burn rate of about $27 million. A Tilray spokesperson referred Barron’s to comments from Tilray’s third-quarter earnings call, where the company said it expects to raise senior debt to bridge its liquidity until Tilray reaches positive operating cash flow.

“Analyst estimates have our quarterly revenue doubling this year on top of our 4-times growth in Q3,” the Tilray spokesperson added. “Our growth is expected from Canadian adult-use, international medical and U.S. hemp products. We can provide an update on our cash balance when we report earnings in March.”

The most extreme cash crunch, in Ello’s estimation, is at Green Growth Brands (GGBXF)—a company that sells nonintoxicating CBD beauty products in malls. With over $20 million in negative cash flow and capital spending in its last-reported quarter, and only about $7 million in cash at the time, Ello figures that Green Growth had about one month of cash remaining. Over the last year, the company’s stock has sunk from US$4.90 to 22 cents.

A Green Growth representative said in an email: “The entire sector is experiencing a considerable cash crunch. Like many of our peers, we are closely monitoring capital and are working with key investors to secure additional funding.”

Another small producer, 4Front Ventures (FFNTF), could also be running low of cash, by Ello’s estimate. With $6 million in cash and a $5 million-plus monthly burn rate—at last report—Ello thinks 4Front has just over one month of cash. 4Front did not provide comment regarding its cash burn rate.

Ello’s analysis counts the cash companies used in their capital spending, but not what they spent on acquisitions. The analysis does not count the marketable securities that a few companies also showed on their balance sheets. Gerson says that the value of those securities can fluctuate. Canopy is a company where that last choice might matter. Ello figured that Canopy’s $830 million in cash would last just under 8 months at its last-reported cash burn rate.

“Marketable securities are primarily investments in U.S. and Canadian government-issued securities,” he said. “As such, it is our position that the analysis of ‘available liquidity’ for Canopy Growth should be based on the total cash, cash equivalents and marketable securities of 2.7 [billion Canadian dollars].”

Counting Canopy’s securities holdings as cash would give it about 20 months of liquidity, Barron’s calculates, at the burn rate used by Ello. And Canopy has the backing of its controlling shareholder Constellation Brands (STZ), a U.S. alcoholic beverage company.

Among the best-funded companies in the industry is Cronos Group (CRON). By refraining from building big production facilities, Cronos has held on to much of the cash it got from its big backer Altria Group (MO). This “asset light” philosophy has left Cronos with $1.1 billion in cash, which should last it for years, by Ello’s estimate of Cronos’s burn rate.

Another financially-prudent player has been Green Thumb Industries (GTBIF), which has over one year of cash, according to the Ello analysis. Along with Trulieve Cannabis (TCNNF), Green Thumb was the only leading U.S.-based operator to show positive cash flow in its last-reported quarter.

“We have been managing the business with a focus on profitability,” says Green Thumb’s head of capital markets, Andy Grossman. “The key going forward is generating positive cash flow. Green Thumb will stand on its own, without the need for additional capital, but remains opportunistic with regard to the capital markets.”