Andrew Rosner of the New York Cannabis Growers and Processors Association discussed the future of the cannabis industry.

Hemp farmers and other members of  New York State’s emerging cannabis industry weighed in on the crop’s economic potential and the prospect of marijuana legalization at a forum in Sag Harbor on Saturday.

David Falkowski, the owner of Open Minded Organics farm in Bridgehampton, one of the first licensed growers of industrial hemp in the state, moderated the discussion, which drew a sizable crowd that included Southampton Town Supervisor Jay Schneiderman, Suffolk County Legislator Bridget Fleming, and Sag Harbor Mayor Kathleen Mulcahy.       The discourse focused on, in the words of Andrew Rosner, the vice president of the New York Cannabis Growers and Processors Association, “the three Cs”: medical cannabis, adult-use cannabis, and hemp cannabis.

The state started allowing the production of hemp cannabis as a pilot program in 2014, explained Mr. Rosner, who owns an upstate hemp farm, HR Botanicals. By law, hemp, which is used to make a range of items including textiles, building materials, and CBD products, must contain less than .03 percent THC, the psychoactive chemical found in marijuana. Any hemp plant that tests above that level must be destroyed.

In 2017, the state expanded its hemp production program, and soon after, a myriad of questionable CBD products had become available to consumers, Mr. Rosner said. “We were seeing a flood of products coming onto New York State shelves that were of uncertain origin, mislabeled, and didn’t contain what they claimed to contain.”

His association was started, he said, to advocate for policies that would allow the emerging industry to flourish, but with reasonable regulations. “We’re not necessarily a cannabis advocacy organization, we’re advocating for consumers and communities that cannabis touches,” said Mr. Rosner.

The next milestone for the hemp industry, he said, was the 2018 federal farm bill that legalized the growing of hemp across the country.

The United States Department of Agriculture and, Food and Drug Administration will now set national standards for hemp, which has caused some consternation among farmers, he said. The way the F.D.A. is proposing to calculate the level of THC in hemp differs from the state’s methods, which could mean that more plants here would exceed the allowable levels and need to be destroyed.

Robert Carpenter, the administrative director of the Long Island Farm Bureau, said his organization has registered its objection to the F.D.A.’s testing method. If hemp “gets hot,” that is, if it inadvertently goes above the .03 THC level, “a farmer could potentially spend all season growing their crop, come to harvest, and then have to destroy them,” he said.     For many farmers, however, hemp could provide an economic boon. New York farmers are at an economic disadvantage when it comes to growing produce like potatoes and corn, he said, because other states have fewer regulations and lower wage levels. “Hemp is one of the new crops that farmers are going to be able to grow and help them be economically viable.”

Steve Halton, the founder of a hemp grain and fiber processing company, agreed that farmers would be wise to add the crop into rotation. Companies like Levi’s jeans, he noted, have started to use hemp in their products. “At our facility, we don’t have enough [hemp] being grown for us, we need a lot more farmers,” he said. 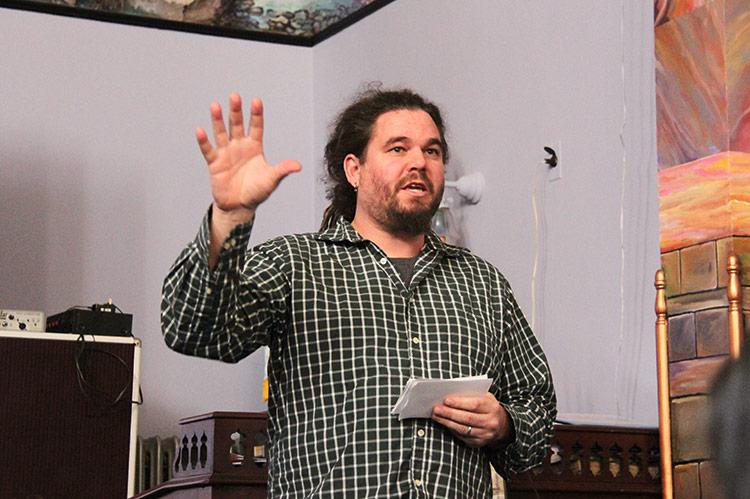 David Falkowski, a Bridgehampton hemp farmer, moderated a forum on cannabis in Sag Harbor on Saturday.

A hemp fiber cultivar is different from the CBD one, he said, and it can be grown exceedingly quickly. “It takes 60 days from the time you plant it to the time you harvest, so if you’re planting in May, by July you’re harvesting, and by August you’re baling.” The hemp fiber and CBD plants can also be grown together. “Their farming and reproductive cycles are completely different. You can actually grow a fiber crop and harvest it before a CBD crop would go into the reproductive cycle, so you don’t have to worry about cross-pollination.”

Gov. Andrew M. Cuomo’s current proposal to legalize marijuana, the Cannabis Regulation and Taxation Act, would allow cannabis with THC levels above .3 percent to be grown for recreational use, and it would expand its medical use.     The legislation calls for the creation of an Office of Cannabis Management, which would consist of a director and a board that will ultimately set the rules and regulations for each market.

Liz Cramer Ernst, a nurse practitioner and the founder of Hamptons Medi Spa, which caters to people seeking medical marijuana, said she now treats more than 7,000 patients, more than half of whom are from the East End. If Governor Cuomo’s proposal is enacted, she said, the list of conditions for which marijuana would be considered a therapeutic benefit would be expanded, and the new ways it would be prescribed would include edibles, concentrates, and flowers.

Doses are currently administered via liquid and oil preparations, transdermal patches, ground plant preparations, capsules, tablets, and lozenges, according to the New York State Department of Health. Advertising of medical marijuana products would be permitted by the law, she said, but it would be highly regulated.

Growers of adult-use cannabis would have to obtain the proper licenses and permits, and prove that they have the capacity to secure the areas where the crop is being grown, and to prevent it from being illegally diverted, among other requirements, said Mr. Rosner. A retail shop would not be permitted within 500 feet of a school, or 200 feet of a place of worship. Sales would not be permitted to those under 21 or to those who are visibly intoxicated.

Governor Cuomo’s proposal, he said, also seeks to make sure the products on the adult-use market are being produced by reputable companies, such as existing hemp farms and the registered organizations that grow medical marijuana. “The state doesn’t want to create a gap that is filled by the black market,” he said.

The state and the New York Cannabis Growers and Processors Association also want to make sure that New York companies, rather than large multi-state conglomerates, are the main producers of its cannabis products, said Mr. Rosner. “We don’t want one billion-dollar company, we want 1,000 million-dollar companies,” he said.