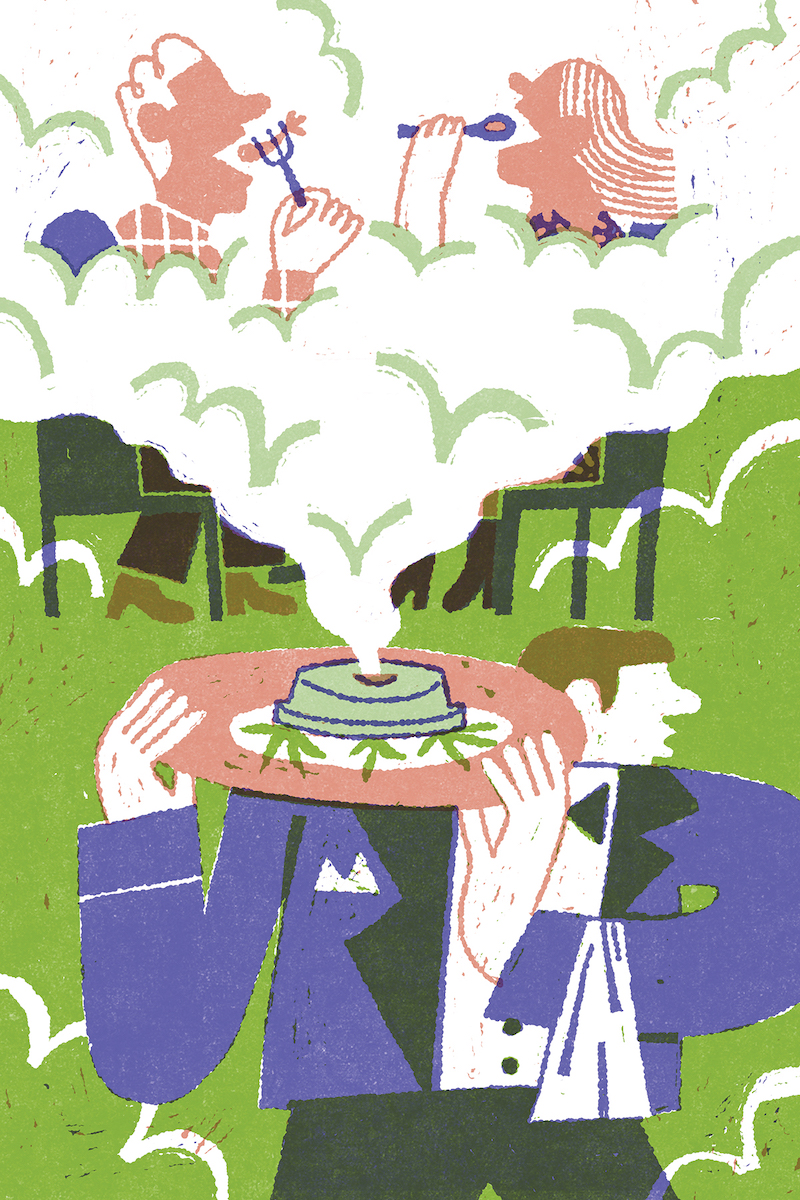 Just over a year ago, Michigan joined the 11 U.S. states that have legalized recreational marijuana. As lawmakers put the finishing touches on state licensing and regulations, various culinarians are fine-tuning recipes that will allow them to contribute to the projected multibillion-dollar industry through food.

Using microdosing, a method that incorporates low doses of the psychotropic drug into meals, chefs are masterfully adding cannabis-infused oils and spices into sweet and savory dishes alike to offer guests a slight buzz. Across the country, cannabis is baked into pizza crust and sprinkled into breakfast staples like lox and bagels. And locally, chefs are entering the cannabis arena with unique catering businesses.

Serving as educational experiences, immersive dinners that incorporate cannabis in each course help to demystify cannabis cuisine. Chefs, including Michigan native Enid Parham, use their tablescapes to introduce clients to the plant, which was not long ago deemed taboo. “I always perceived cannabis to be a bad thing because I grew up in the Nancy Reagan era of DARE,” says Parham, also known as Chef Sunflower. Parham has ventured into the cannabis world with LuckyPistil Catering. “Being a dialysis patient, my dad smoked cannabis to cope with his pain. I remember flushing an ounce down the toilet thinking I was helping him quit drugs — boy, how wrong I was.” Today, Parham says her hope is that clients will leave her dining events (which feature dishes like squid ink pasta with infused sun-dried tomato mushroom sherry sauce) “inspired to explore the world of cannabis with an open mind.”

Recent marijuana laws make it easier for chefs to have honest conversations about the ingredient with guests in these intimate settings. Chi Walker and Jenna Michlin, co-founders and head chefs at Femmes de la Fleur, go so far as to say legalization has lifted the taboo associated with marijuana. “A few years ago, it wasn’t commonplace to talk about marijuana usage so openly. Now, it’s everywhere,” Michlin says. “I think the overall acceptance has expedited the demand in the market.” Walker adds, “With legalization, we’ve been able to destigmatize usage and create spaces for people to be open about their personal and experimental usage.”

Increased public awareness has likely contributed to the broad range of locals lining up for cannabis dining experiences like Femmes de la Fleur’s — that and highly intriguing menu items, such as locally foraged roasted chanterelle mushroom soup and Rock and Rye Short Ribs served with polenta. “Our clientele is a true hodgepodge of folks,” Walker says. “It’s your everyday white-collar suburbanite attorney, your grandparents, the young cute couple on the block, those seeking more holistic approaches to pain management. People of all walks of life.”

Gigi Diaz, executive chef of Detroit-based catering company Cannabis Concepts, is mindful of cooking for this diverse clientele, including those with dietary restrictions. “I do vegan and vegetarian food as well,” she says touting her pan-fried cauliflower steak encrusted in infused potato flakes and drenched in a mushroom cream gravy. “It’s a really delicious meal.” For Diaz, the 2017 winner of the internationally acclaimed High Times cannabis chef competition, cooking with cannabis is scientific. Those potato flakes, for example — Diaz takes russet potatoes, dices them, soaks them in a housemade cannabis tincture, dehydrates them, and then pulverizes them to make tiny potato flakes. “There’s an artisan concept to it, and that’s what we pride ourselves on.”