Canadians bought about $146.2 million of legal cannabis in December, the biggest month of sales on record, according to Statistics Canada. Taken at an annualized run rate, those sales figures would see sales in Canada’s legal recreational cannabis industry hit $1.75 billion. Canadian retail store sales rose 8.1 per cent in December from the prior month with nine out of 10 provinces reporting monthly sales advances. Manitoba led all provincial gains with a surprising 53.9 per cent rise in sales, while British Columbia was the only province to report a decline in purchases.

Cannabis took another step closer to becoming a tradeable commodity on the futures market after Nasdaq added three Canadian pot price indices onto its data platform on Friday.  Nasdaq’s proprietary Global Index Data Service will provide its users with Canadian cannabis spot prices provided by New Leaf Data Services, which measures and tracks the average wholesale price of legal pot each week. New Leaf Data disseminates its cannabis data under its Cannabis Benchmarks brand, which incorporates prices from an undisclosed number of part-time reporters. Pricing sources include growers and dispensary owners as well as industry associations that submit findings to a team of analysts. In addition to Canadian data, the company also provides U.S. cannabis prices as well as hemp biomass figures.

A Victoria, B.C.-based retail cannabis chain was hit with a steep $1.5 million fine and has the ignominy of being the first to be charged under British Columbia’s Cannabis Control and Licensing Act. The Trees Cannabis Dispensary, which operates without a proper licence, received the fine last month, according to the CBC. The retail chain shut down all eight of its locations following a raid at one of the chain’s Victoria locations in July, seizing about $200,000 worth of cannabis. The store’s owner said the fine reflects the total amount of cannabis the Victoria dispensary sold between the time provincial officers visited the store to provide information on cannabis regulation between May to July.

Edmonton is the latest city to express interest in opening cannabis consumption lounges, despite the fact they aren’t yet legal in Alberta or anywhere in Canada. Edmonton’s city council released a report late Thursday presenting three models, when or if the rules are relaxed, according to the CBC. The options include allowing patrons to consume cannabis edibles in a stand-alone facility, allowing both cannabis edibles and alcohol in the same location or allowing people to consume cannabis in the same venue, but in a separate room from alcohol. Several U.S. states have cannabis lounges, including California, Alaska and Michigan, while Ontario recently launched an online consultation ahead of plans on whether the province will legalize similar venues.

$6.61
— The price of a gram of cannabis in Canada, up 2.3 per cent from the prior week, according to the Cannabis Benchmark’s Canada Cannabis Spot Index. This equates to US$2,292 per pound at current exchange rates. 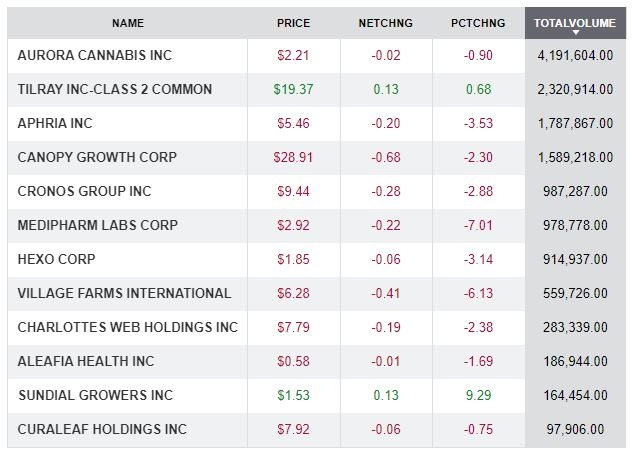