Times have changed! Only a few years ago, America associated cannabis culture as an illicit gateway drug; one of the main causes our prison system is overpopulated with nonviolent offenders, a Schedule II substance right up there with heroin and the main influence of the comedy stylings of Cheech & Chong (along with Harold & Kumar).

But no longer: Over the past several years, many states of revisited legislation that either decriminalized or legalized marijuana, as the industry yielded an extremely lucrative bumper crop that can be grown and taxed right here in the U.S.A, helping millions suffering from a variety of conditions that would otherwise have them hooked on powerful opioids.

We sat down with Michael Zaytsev, founder of High NY, a startup catering to the marijuana community in New York. Zaytsev has also authored two books on the subject of cannabis culture: The Cannabis Business Book and The Entrepreneur’s Guide to Cannabis.

Grit Daily: For the uninitiated, how big is the “business of cannabis” now?

Michael Zaytsev: In 1938, Popular Mechanics called hemp the billion dollar crop. Today, global annual Cannabis demand is estimated to be over $340 Billion. That’s just Cannabis. The business of Cannabis is much larger than that. The $340 Billion is what’s happening now with Cannabis. It doesn’t take into account what’s possible in the future. For example, assuming hemp alternatives are embraced and displace the less eco-friendly status quos for the paper, bioplastics, textiles and building materials industries, then we’re talking about trillions of dollars. That’s an order of magnitude higher. Beyond that, we’re still very much in the infancy of Cannabis derived medicines and cannabinoid based pharmaceuticals. The bottom line is the sky’s the limit. The exciting thing about the time we’re living in is that the answer to this question will be determined by the people building the industry and creating policy right now. That’s why the Cannabis industry is such an attractive arena for entrepreneurship. This has never been done before and the people leading the way right now have the unique opportunity to make history while defining the future of a trillion dollar, paradigm shifting industry. 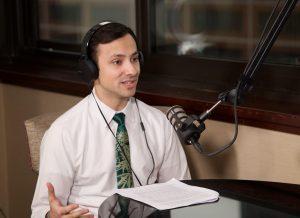 Michael Zaytsev dishes on his book on The Sociable Podcast.

MZ: Tobacco kills, while Cannabis saves lives. Big Tobacco is already getting involved in Cannabis and no doubt they’re trying to create and own “Big Cannabis.” They’re in for a rude awakening though, because the Cannabis plant has a consciousness that will not respond well to exploitation. The Cannabis consumer doesn’t want mass produced, GMO, pesticide-laden Cannabis grown by corporations who only care about profit maximizing.

GD: What prompted you to write a book on it?

MZ: Fear and concern about the future well-being of the Cannabis plant. I don’t like what I’ve been seeing in the industry for the past few years. It’s increasingly becoming capitalistic and consumerist in nature and straying from the higher purpose and values that the Cannabis plant and community have championed for years. My book emphasizes the importance of remembering the roots of this plant, which stretch across social, economic and political boundaries. This is a sacred healing plant that has helped humanity prosper and develop for thousands of years. The Cannabis industry represents more than just a once-in-a-generation money making opportunity for entrepreneurs – it offers a chance to correct the wrongs of the past and help build a more just and equitable society. It’s a chance to provide safe medicine and healing for millions, if not billions of people, and it provides many mechanisms for reducing the harm modern industrialism has inflicted on our planet. The book is like a Think and Grow Rich for Cannabis. By interviewing 50 of the industry’s most potent and prolific insiders, I share with readers what in my experience is the right way to approach Cannabis business if you want to have meaningful success. And that’s with a higher mindset in which people and planet are much more important than profits.

GD: Who should be reading it?

MZ: Anyone who wants to be in the Cannabis industry –whether as an entrepreneur, investor, or employee– would be wise to read this book. It’s full of wisdom from 50 of the industry’s most impactful leaders. It will impart on you the shared values and mindsets of these leaders. It will also provide practical and tactical insights on what makes the Cannabis industry unlike any other, how to avoid the 5 most common mistakes first time Cannabis entrepreneurs and investors make, how to raise capital for your Cannabis business, whether or not Cannabis business is right for you, and much more.

GD: What’s your role in the industry (beyond author)?

Cosmic Cannabis Ambassador. Humble servant to the higher power which gave us the Cannabis plant. Community Leader. Connector. Trailblazer. Founder of High NY. Above all, I’m a Coach. I’m a catalyst for a higher way of being. I facilitate inspiration, growth, and connection to something greater. I take people higher. Thanks to Cannabis, I’ve had the opportunity to offer Cannabis education to hundreds of thousands of people. It’s my belief that Cannabis is one of the most powerful tools humanity has for healing the world, facilitating peace, and cultivating connection between all living beings. My role in the industry is to remind everyone that Cannabis is bigger than industry. There’s much more to this plant than commerce and profit. It’s an agent for restoring and elevating humanity into a more healthy, natural, and connected state. Just as it promotes homeostasis in the body, if utilized correctly it can do the same for the global body of human civilization.