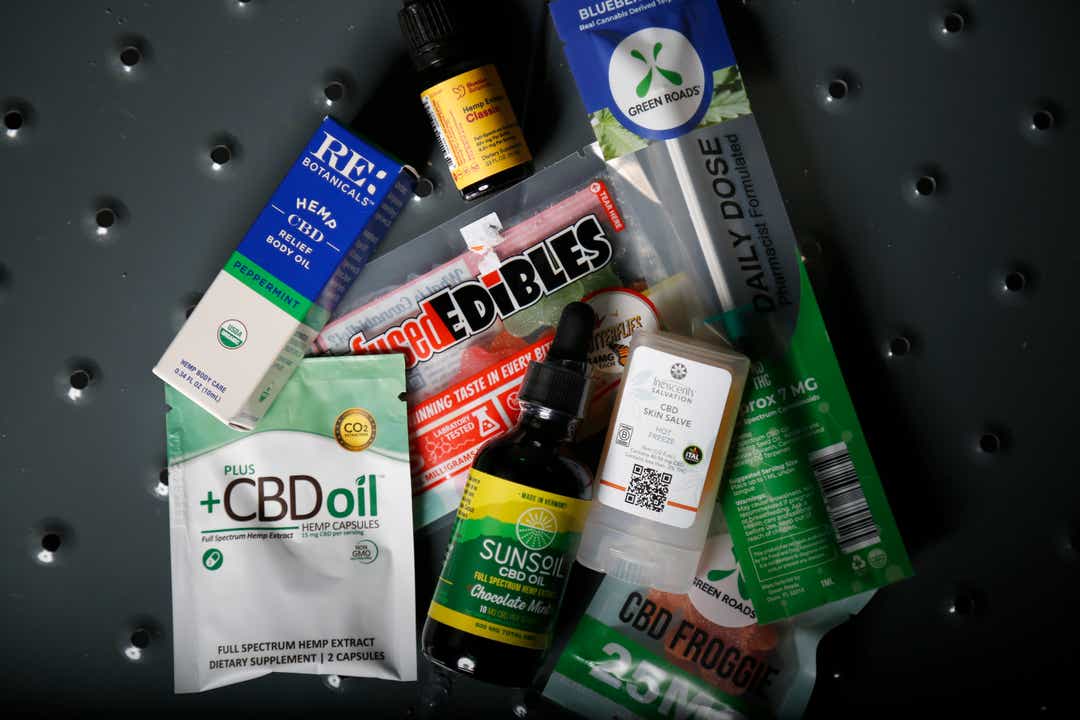 In lotions sold at the mall. In your freshly squeezed juice. In dog treats that promise calming effects.

But there are few regulations and rules regarding products containing CBD, or cannabidiol, a cannabis compound found in marijuana and its non-intoxicating cousin hemp. Testing is not required. There is no way to know for sure whether the product contains the amount of CBD advertised on label – or whether it’s free from lead, pesticides and other potentially harmful substances.

The Cincinnati Enquirer, part of the USA TODAY Network, recently had eight CBD products tested to see if they matched what the label claimed.

The results: most products contained the CBD advertised. But a few had far less than they were supposed to and three contained heavy metals or pesticides.

That’s in line with what researchers and advocates have found in similar experiments. Martin Lee, founder of advocacy organization Project CBD, doesn’t expect that to improve any time soon, even with further regulation by the federal Food and Drug Administration.

„These products have a lot of crappy things the FDA allows,” Lee said. „The onus for regulation is falling on the states.”

CBD business: This Milwaukee company rolls thousands of CBD joints every day and is bringing in millions

CBD at work: New products, new laws are causing confusion in the workplace

Marijuana remains illegal on the federal level, so each of the 33 states that has legalized it in some capacity has had to decide what to test for and what’s an acceptable amount. There are no federal hemp testing standards.

Ohio legalized hemp and therefore CBD derived from hemp in July 2019. Eventually, the Ohio Department of Agriculture will test hemp products to make sure they match what’s claimed on the label. The agency has contracted with three companies, including the lab consulted in this story, to test products before a state lab is established.

Meanwhile, the agency is checking to see whether products are making untested claims such as relieving sore muscles or helping people fall asleep.

The Enquirer bought eight products from grocery stores and a tobacco store. We sent the products to North Coast Analytical Lab in Streetsboro, Ohio, which is licensed by the state to test medical marijuana and is accredited to test hemp.

The lab performed several tests on each product:

Four of the products were within 10% of the amount of CBD listed on the product label. One fifth product tested at 11% more CBD than the label’s claim.

None of the products contained microbials such as mold or mycotoxins such as salmonella.

There’s no acceptable level of these metals for cannabis, but several states have adopted standards based on those for drinking water or other consumable items.

“There’s no known data for some of these things on marijuana,” North Coast lab director Nick Szabo said.

[Get news updates sent straight to your phone. Download our app here.]

Lead was found in small but measurable amounts in two products: Plus CBD Oil capsules and Sunsoil CBD Oil in chocolate mint. Arsenic was also found in the Plus CBD capsules. All amounts were below limits for Ohio medical marijuana products.

Our lead test result for the Sunsoil chocolate mint oil – 0.15 parts per million – was more than the company’s third-party results for the product – 0.03 parts per million. Both numbers are below the limit for nutritional supplements under FDA rules.

„There is wide lab variation with current methods for testing potency, which is why we test with three third party labs to ensure we’re meeting label claims and provide potency results on our website for each batch of oil,” Sunsoil said in a statement. „We ensure that consumers are getting what is claimed on the label (10mg/mL) based on our third party lab results.”

The Plus CBD Oil capsules also contained 12.36 parts per billion of fungicide trifloxystrobin – higher than Ohio’s threshold of 10 ppb, among the most stringent in the nation. The EPA does not consider the fungicide harmful to humans but it can cause an allergic reaction on the skin.

Plus CBD did not respond to an email seeking comment for this story. 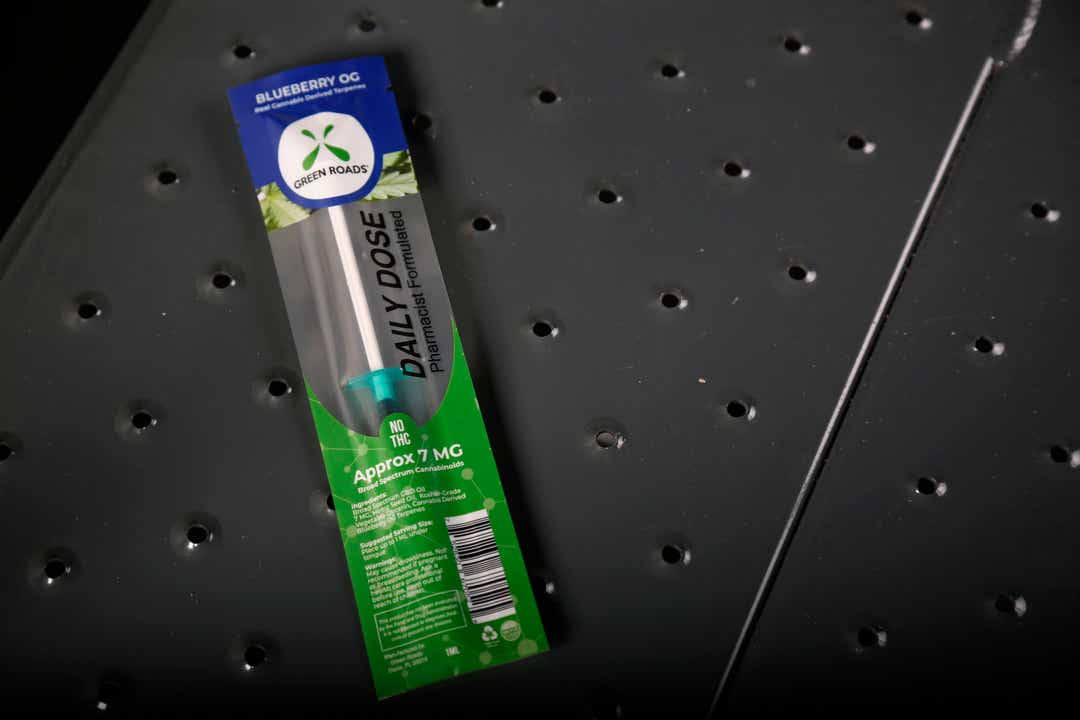 Two products posted amounts of CBD far lower than advertised. One product – Infused Edibles’ Butterflies gummies – had less than half the advertised CBD.

In a statement, a Green Roads spokesman said the company „stands behind the quality and purity of our products.” The company tests its products at a state-certified lab in Florida.

„Disparities in testing results can be caused by a variety of factors, including differences in testing procedures and standards, as well as the production date,” the company said. „Because CBD is a naturally-occurring ingredient, a certain amount of variation in concentrations is to be expected.”

Half the products contained no THC, or tetrahydrocannabinol, the cannabis compound responsible for the „high” from consuming marijuana. The other half contained 0.3% THC or less – that’s the federal and state limit for hemp-derived CBD. 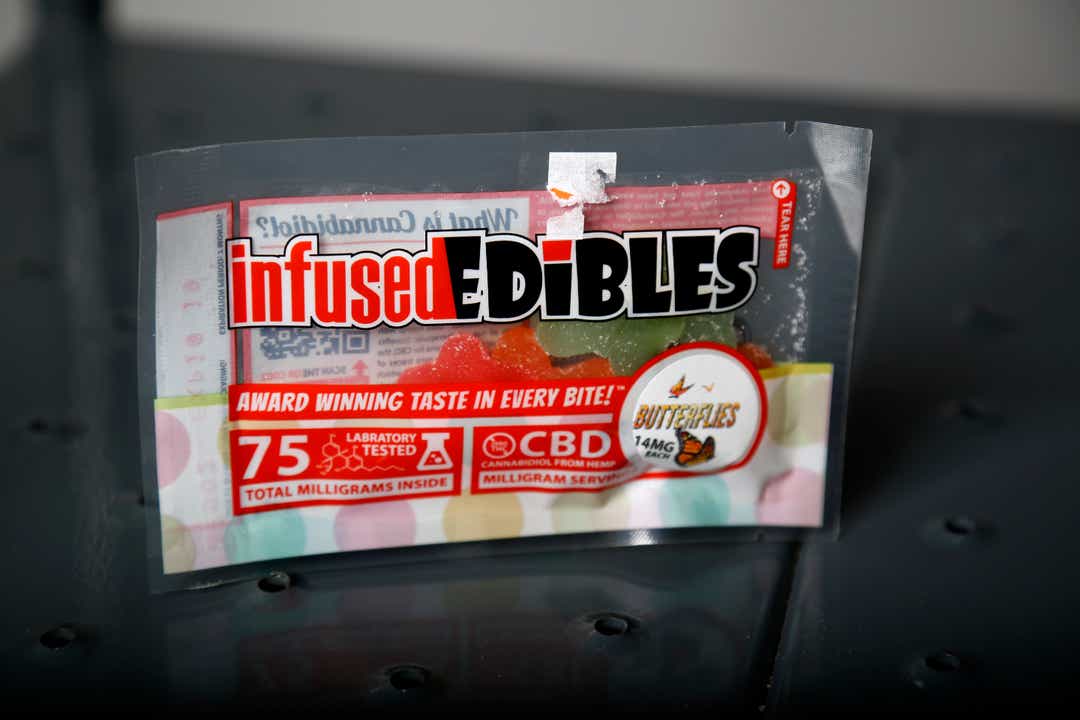 The Infused Edibles gummy butterflies, bought at a smoke shop, had expired the previous month. But the product was sold from behind a counter, so the expiration date stamped on the package wasn’t noticed until later.

The Enquirer decided to have the product tested anyway because it could have been sold to other consumers. Test results showed small amounts of residual solvents, including ethanol (655 parts per million) and acetone (48 parts per million). The amounts were less than industry-set limits.

Infused Edibles questioned the presence of acetone since it is not used in its production process nor stored in its production facility. The company has discontinued the butterflies, according to compliance consultant Ian Armstrong. Armstrong said if a customer had contacted them about the expired product, they would have replaced it with a new one.

„Infused Edibles carries product liability insurance, and part of the requirements for that mean that Infused Edibles must be able to perform tasks such as recalls and replacements,” Armstrong said in an email.

What to look for

So if nothing is regulated and testing results vary, what can a consumer do?

Lee warns results aren’t a guarantee because companies could be paying an „independent” lab to get the results they want.

Five of the eight products had QR codes linked to test results. Some were incomplete. For example, the hot freeze salve results only show CBD and other cannabinoids present – not whether it contains metals or other substances people might want to avoid.

Why does it matter that the product could contain less CBD? For starters, customers aren’t getting what they pay for and products aren’t usually cheap.

And it makes it difficult to figure out what dose to take and what product to buy. Someone might try a mislabeled 50 mg product with no results and then spend more on a higher-CBD product, when the lower dose might have been enough.

That’s a big concern for Dr. Kevin Hill, director of addiction psychiatry at Beth Israel Deaconess Medical Center in Boston and professor of psychiatry at Harvard Medical School. Hill said there’s a lot of promise for CBD for neuropathic pain and anxiety, mostly in pre-clinical and animal studies.

“I’m bullish on CBD, but I tell organizations they need to pump the brakes,” Hill said. “The research has not kept pace.”

Hill said clinical research shows CBD – in high doses as cannabis extract Epidiolex – is beneficial for some pediatric epilepsy conditions. Dosing is inconclusive for other uses, he said, but studies involved large doses in the hundreds of milligrams per day.

That’s something to think about before plunking down $5 for a drink infused with 5 mg of CBD.

„It’s a placebo,” Hill said. „It’s not going to treat a medical condition.”