A woman who suffered from such severe anxiety she used to throw up at work claims drinking water infused with CBD has 'cured’ her condition.

Victoria Stuart, 43, of Frome, Somerset, would lie awake at night gripped by bouts of worry while working in a 'stressful’ job as a goods safety manager at a local firm.

She began suffering from agonising IBS flare-ups, developed psoriasis on her scalp and often vomited before and during management meetings at work.

In a state of desperation, she began smoking cannabis to help her get to sleep. 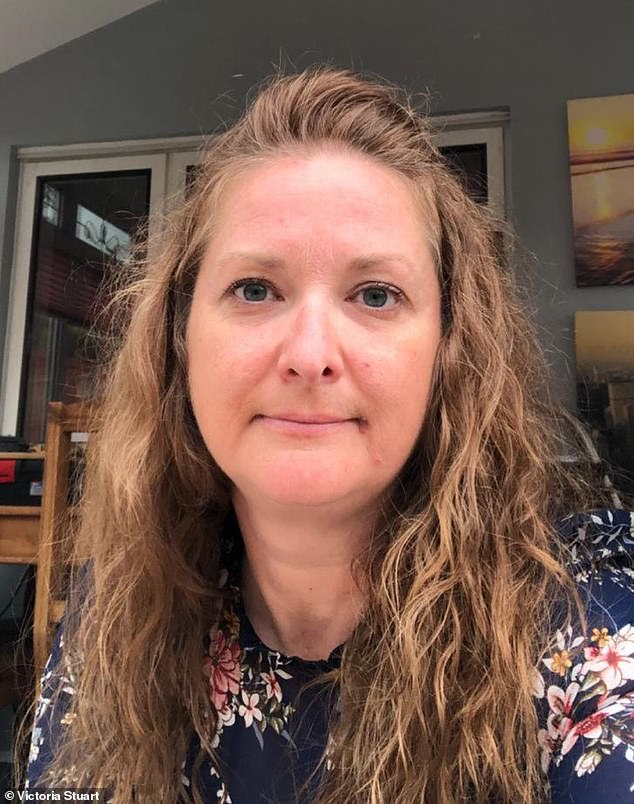 Victoria Stuart, 43, of Frome, Somerset, suffered from such severe anxiety she used to throw up at work and turned to drugs to help her sleep

Victoria, who lives with her partner Peter Walker, 47, a construction manager, and stepchildren Sally and Jake, also tried herbal remedies and was prescribed anti-depressants by the doctor – both of which failed to help.

But after enduring four years of hell, Victoria says she is now 'cured’ and 'happy’ after discovering a particular brand of CBD water.

She told FEMAIL: 'I’d never suffered from any mental issues before, but about four years ago a stressful situation at work triggered extreme anxiety.

’Even after the issue was dealt with, I just couldn’t seem to shake it. My IBS flared up and I developed psoriasis on my scalp, which I’d never suffered from before.

’I also had a heightened sense of smell, which would make me feel sick, and was often physically sick before big meetings. 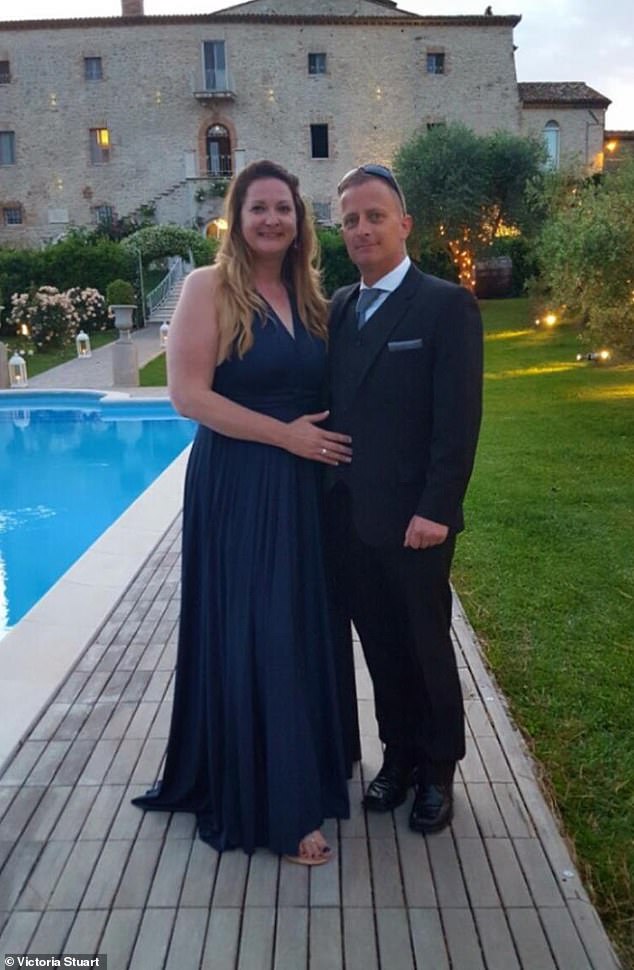 Victoria, who lives with her partner Peter Walker, pictured, found herself lying awake at night gripped by bouts of worry while working in a 'stressful’ job as a goods safety manager at a local firm

’I even had to leave the meetings sometimes to be sick, and was often sick straight afterwards. But the worst thing was I just couldn’t sleep much.

Victoria was struggling to function well on the little sleep she managed. She was working between eight and 12 hours a day, full time, and coming home to cook and keep a household running.

She said: 'I tried everything to try to get more sleep. I tried to stop thinking about work, I tried herbal remedies to calm me down and reduce the anxiety, I was prescribed anti-depressants by the doctor, but they didn’t work. I even tried drinking alcohol in the evenings, but it wasn’t quality sleep. 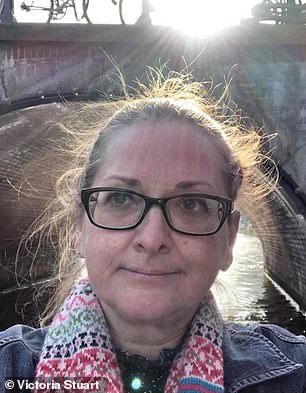 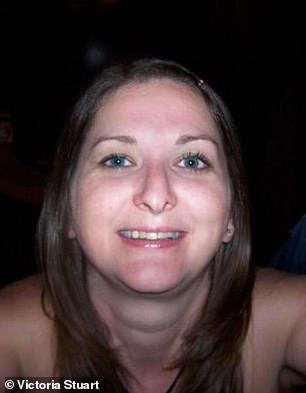 Pictured left in 2018 and right earlier this month after starting to drink the CBD water, Victoria began suffering from agonising IBS flare-ups, developed psoriasis on her scalp and often vomited before and during management meetings at work

’I was desperate for an answer. I tried smoking cannabis, and it was the only thing which worked and meant I could have a whole night’s sleep.

’I took it on and off for around six months, but it wasn’t sustainable. I tried a couple of CBD products too, but they had no effect.

’Looking back, I realise it made me more short-tempered at home, which impacted badly on my family.

’Work were really supportive and because I’d been there since I was a teenager, they got me a consultant, someone who could tail me and help if I found something difficult because of the brain fog I kept having. 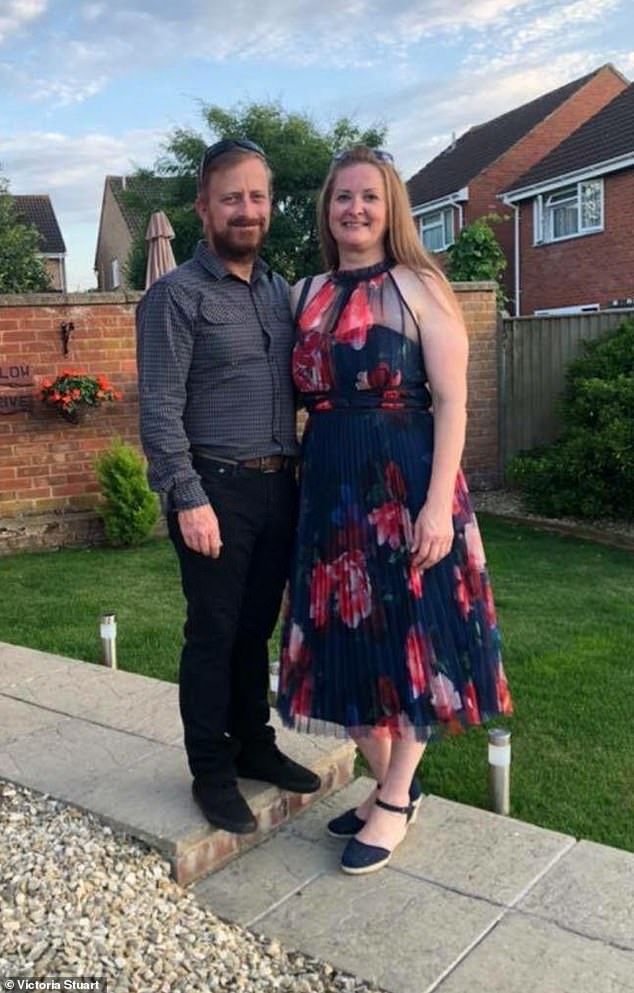 Victoria, pictured at her brother’s wedding, was struggling to function well on the little sleep she managed. She was working between eight and 12 hours a day, full time, and coming home to cook and keep a household running

’Sometimes just putting a sentence together was difficult, and I even forgot names of close friends.’

Victoria’s cousin told her how she’d read about a new CBD water called LiquidCool. Makers claim it is 52 times stronger than other CBD water available in shops in the UK.

Victoria says: 'I was ready to try anything that might help. A drank one bottle a day for a couple of days and it felt like a fog had lifted.

’I’m doing the same job but I’m less stressed, but if there is stress at work, I find I can manage it without becoming anxious.

’My IBS has gone, and I can actually enjoy a full-night’s sleep, which has had a huge impact. The psoriasis is still there but I’m hoping that will go soon too. 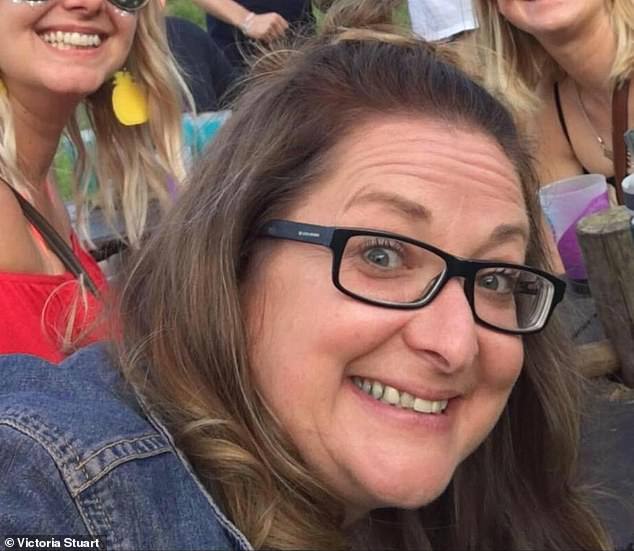 After Victoria’s cousin told her how she’d read about a new CBD water called LiquidCool, she claims it has transformed her quality of life

’It’s incredible what a difference a bottle of water has made to my quality of life.’

Manufacturers claim Liquidcool, which contains cannabidiol, a non-psychoactive ingredient of cannabis, is absorbed by the body 52 times quicker than any other CBD product on the market.

It is said to induce a feeling of calm within minutes, which lasts for 12 hours, and provide increased energy and concentration for up to 24 hours.

Reported health benefits of CBD include helping to reduce anxiety, boosting the immune system and eliminating joint pain and inflammation.

CBD can be found in skincare products such as cleansers, moisturisers and creams as well as sunscreens, oils and serums. 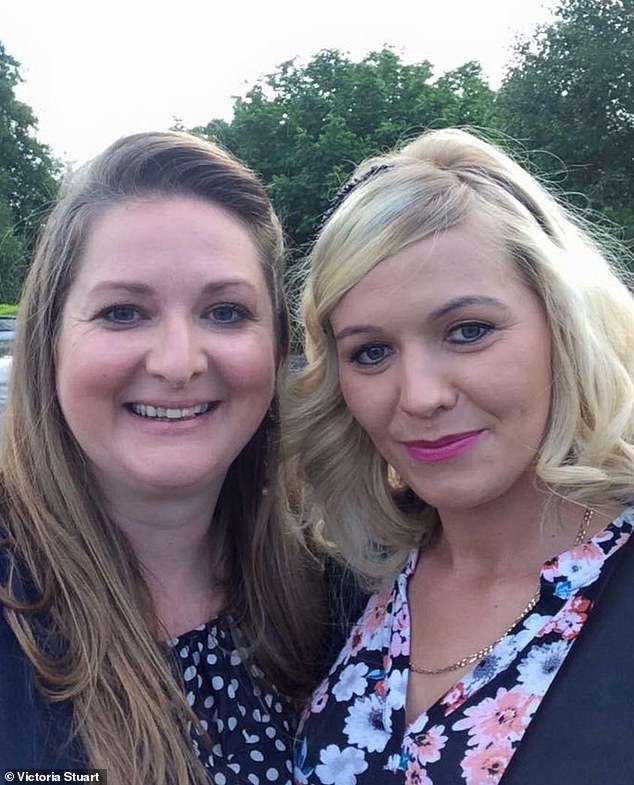 Victoria, pictured with a friend, took cannabis on and off for around six months, but it wasn’t sustainable. She tried a couple of other CBD products too, but they had no effect – until she found Liquidcool CBD water

Capsules, vape flavours, lozenges and even gummy chews are also now being sold in stores and online outlets around the UK.

Many people, including celebrities like Jennifer Aniston, Kim Kardashian and Gwyneth Paltrow, use CBD based products to complement their daily diet while others use the hemp compound to improve relaxation and sleep.

The global market now valued at tens of billions of pounds and Google searches for CBD now top more than 6.4 million every month.

How does Liquidcool CBD water work? 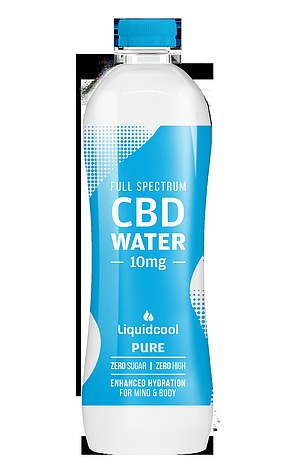 The makers of Liquidcool claim the product has a 92 per cent absorption rate in just 190 minutes due to 100 per cent natural powder made from the hemp plant.

Normally the absorption rate for CBD oil drops in the stomach is between three and six per cent.

Liquidcool, which contains 10mg of hemp, doesn’t use any form of extraction during production.

Other brands rely on changing the chromosomes, but the raw material then becomes man- made which dramatically reduces the health benefits of CBD.

Liquidcool patented its ‘full spectrum’ natural CBD which is made through ‘microencapsulation’ – the process of drying the plant then carefully selecting the leaves and flowers because they contain the majority of the cannabinoids inside.

The dried flower and leaf parts are broken into small pieces, filtered and then the tiny particles are coated to create a 100 per cent natural ‘pea-protein’.

By retaining all plant-based components, the full spectrum CBD in Liquidcool also benefits from the synergistic properties between all the components. Due to this the CBD goes directly to those places in the body where it is needed most.

The pioneering technique ensures the Swiss water used in the drink maintains its water-like taste while still delivering phytocannabinoids, terpenes, flavonoids and minerals.

During a lab trial, 100 per cent of the panellists said they could not tell the difference between the taste of regular water and Liquidcool, with all of them admitting they felt calmer and more focused after drinking the CBD infused water.

CBD is one of the natural components of the industrial hemp plant. These and the other vegetable cannabinoids THC, THCA, CBDA, CBG, CBGA, CBN, in combination with terpenes and minerals, provide the benefits of a full spectrum CBD product.

The hemp plant naturally contains over 100 cannabinoids that each, similar to CBD, provide their own unique benefit.

Liquidcool is available to order online in the UK now at www.liquidcool.co.uk from £1.98.