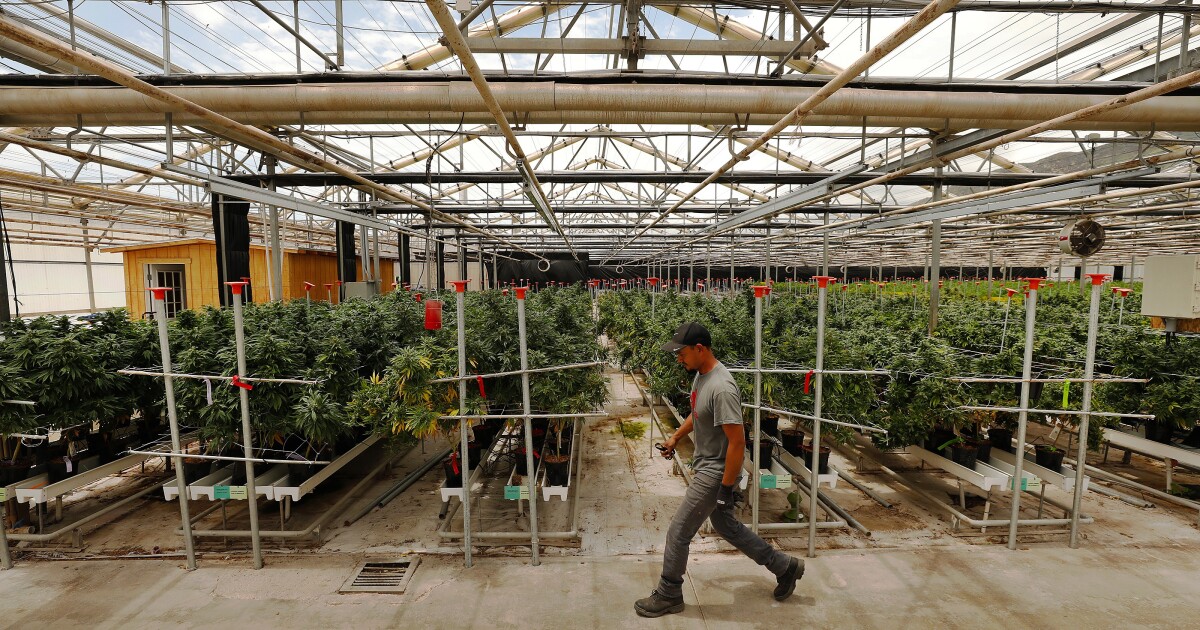 California’s largest marijuana association is in a bind after powerful labor unions accused the organization of distributing an anti-union document and asked Democratic politicians to “refrain from engaging with” the group in a display of organized labor’s immense political muscle at the state Capitol.

The call to cut off the California Cannabis Industry Assn.’s access to decision makers marks a major blow to the state’s most influential marijuana lobbying group and comes at a precarious time for its more than 500 member companies, which operate in a legal industry struggling to compete with the illicit market, laying off workers and hovering near insolvency.

The association, which represents companies working across the marijuana supply chain, went into 2020 hoping to push legislation this year to cut taxes, open more cities to pot shops and create a banking system for the industry. Now some are concerned those efforts could be stymied by the tussle with the unions.

“The obstacles are so high and so challenging that in my view they can only be overcome if the industry and organized labor work together,” said Assemblyman Rob Bonta (D-Alameda). “When I saw this white paper from CCIA, I was very disappointed and frankly worried about what the future holds.”

Californians voted in 2016 to approve Proposition 64, legalizing growing and selling marijuana for recreational use. But so far only about 1,070 retailers and delivery firms have been licensed, a fraction of the 1,800 dispensaries that were selling marijuana for medical purposes before the initiative and the 6,000 sellers that were originally anticipated by state officials.

Industry leaders say legal cannabis firms have experienced numerous impediments, including state and local taxes that can add 45% to the cost of legal marijuana, and a provision of the law that has allowed three-quarters of California cities to ban pot shops.

State law requires applicants for cannabis licenses with 20 or more employees to enter into a labor peace agreement, a sort of neutrality accord in which the employer promises not to disrupt a union’s attempts to organize employees and the union agrees not to picket, boycott or otherwise interfere with the employer’s business. The United Food and Commercial Workers, which advocated for pot legalization, originally championed the provision in a law regulating medical marijuana in 2015 and again when guidelines for medical and recreational sales were merged in 2018.

But UFCW, the California Labor Federation and two local Teamsters unions alleged earlier this month that a document the association distributed to its members is evidence of an attempt to weaken the law. The unions sent a letter to the Democratic caucuses in the Senate and Assembly that included a copy of the paper, which offered guidance for pot businesses that are negotiating labor peace agreements.

“The common belief is [labor peace agreements] make it substantially more likely a union will successfully organize employees and represent them in negotiating a collective bargaining agreement,” the association told its members. “If that happens, a cannabis employer will encounter decreased flexibility and increased costs in operating their business and administering the collective bargaining relationship.”

Jim Araby of UFCW Local 5 alleges that the association’s recommendations have been mirrored in at least three labor peace agreements proposed by its members.

“This white paper essentially shows that it looks like the intent of CCIA is to drive a wedge between the industry and labor,” Araby said. “I’ve seen it as a pattern.”

Lindsay Robinson, executive director of the California Cannabis Industry Assn., said it was a mistake for her organization to send members the document, and her group sent a letter to Democratic lawmakers to set the record straight.

“We did not intend for this document to be anti-union and have since retracted the white paper,” Robinson wrote to legislators. “This white paper does not reflect priorities in our legislative platform, nor our guiding policies.”

Association spokesman Josh Drayton declined to comment on the complaint by labor groups that this was not the first time there has been a dispute with CCIA members over the role of unions in the industry.

“Our goal is to move forward to strengthen the relationship between the industry and labor in order to keep people working,” he said.

But the organization’s decision to retract the paper did little to stem the immediate fallout at the Capitol.

The cannabis association had promoted Gov. Gavin Newsom, Lt. Gov. Eleni Kounalakis and three state lawmakers as featured speakers at its upcoming policy conference next month. Shortly after the unions distributed the letter, Newsom and the other politicians were removed from the agenda.

A spokesman for Newsom said the governor doesn’t plan to attend the conference.

“Supporting workers and their organized representatives is crucial to promoting economic justice and opportunity for Californians in the cannabis industry,” said Jesse Melgar, Newsom’s press secretary. “The governor hopes that the industry association will correct course and partner with organized labor going forward.”

A representative for Kounalakis said she had never confirmed that she would attend the conference and will participate in a University of California regents meeting that day instead.

Now labor unions are meeting with lawmakers and discussing potential legislation that would lower the threshold that triggers labor peace agreements to any company that employs at least five workers, which would make it easier to organize more employees in the cannabis industry.

“A strong, empowered, diverse cannabis workforce is essential to realizing the voters’ intent in passing Prop 64 — a regulated marketplace that assures safety for consumers, communities, and workers,” said Amber Baur, executive director of UFCW Western States Council. “To this end, UFCW Western States Council is actively engaged on many issues with both industry and labor partners. Among them is lowering the threshold for labor peace agreements.”

“I think this really requires CCIA to take a big step forward and in partnership with labor and embracing the threshold of five employees for the labor peace agreements to kick in could be part of that step,” he said.

Political consultant Mike Madrid said it isn’t uncommon for labor to use its political muscle to force businesses to bend to its will. While unions were helpful in allowing the cannabis industry to get off the ground, the honeymoon is over, Madrid said.

“You’re off the ground floor now, welcome to the biz community, this is what it’s like,” he said. “I think what you’re witnessing is [the industry’s] new understanding of how business is done in California, which is: you have to play by union rules, or you don’t exist.”

Robinson would not say whether some legislators have cut off communication since the labor warning went out.

“I can’t really speak to that at the moment,” she said. “We are trying our best to communicate with our legislative allies and the unions.”

Asked about the impact of the dispute, Robinson added, “It’s not a positive thing and it’s not something that we would want. We do not want this rift with organized labor. And we are working to correct it and find a pathway forward.”

CCIA said it is proactively responding to pressure from lawmakers for the industry and labor to work out their differences.

Formed seven years ago, the California Cannabis Industry Assn. has more than 500 active members, including cultivators, distributors, manufacturers, delivery services, retail stores and testing labs, as well as ancillary service providers that include insurers and attorneys.

The dispute boiled over as lawmakers introduced their legislative proposals for 2020. The association has seen 50 or more cannabis-related bills per year in previous sessions, but the number introduced this year is down, with about two dozen in the pipeline in addition to several spot bills where the proposal has not yet been defined.

Having a role in determining how new bills are written is “extremely important,” Robinson said.

“The language that goes into those bills really needs to be coming from the industry in many ways, so they can really understand the practicality of that language and how it’s going to impact businesses,” she said.

A bill to temporarily cut taxes was revived before the labor dispute, but legislation has not yet been reintroduced to address other priorities of the industry, including a measure that stalled last year that would require more cities to allow marijuana shops.

Sen. Robert Hertzberg (D-Van Nuys) still has hopes for action on a proposal to create a banking system for the industry, but is “engaging with stakeholders on how to move forward,” said Katie Hanzlik, a spokeswoman. “As far as the labor stuff goes, our office is aware of it but not interested in commenting at this time.”

Other lawmakers also declined to discuss the labor-industry skirmish, which has been a sensitive issue at the Capitol.

One industry insider, who spoke on condition of anonymity because of concern over political retaliation, said the dispute has roiled the cannabis world in California and put in doubt whether sufficient changes will be made this year to keep some in the legal market afloat.

“It’s a mess. It’s a very bad situation,” the insider said. “The industry was on the verge of consolidating around a few key agenda items this year and this throws a massive wrench into the works.”

Robinson said she’s optimistic that all sides will recognize the need to work together given the problems facing the regulated market.

“Now more than ever,” she said, “we recognize that we need to come together with greater communications and collaboration.”