Canadian cannabis companies are introducing lower-priced, „value brand” marijuana in a bid to overtake sellers on the illegal market, who reportedly account for nearly 70 percent of the country’s total cannabis sales.

Recreational marijuana was legalized in Canada under the Cannabis Act, which has been in effect from October 2018. Canada is the second country in the world to legalize cannabis for recreational use nationwide after Uruguay.

In the year following the legalization of recreational cannabis, marijuana sales reached around $908 million, with more than 400 retail stores available across the country. However, sales from online shops and retail stores accounted for only around 15 percent of the total revenue as of September 2019, according to a report by Statistics Canada released last December.

„Online sales represented 13.3% of total sales from cannabis stores since legalization,” while „direct-to-consumer trade by wholesalers, including retail sales by publicly operated cannabis stores classified as wholesalers, accounted for a total 1.9% of cannabis-related retail activity since October 2018,” the report said.

Legally sourced cannabis was reportedly priced at an average of $7.84 per gram, while illegal sources offered it at around $4.36 per gram on average during the last quarter of 2019, according to Statistics Canada.

Twd., Canopy’s value brand, is offering a one-ounce product this April called „Twd. 28”, which will be priced at $4 per gram, with a THC (tetrahydrocannabinol) potency level of 13 to 25 percent, CNBC reports.

„All of this is designed to draw consumers from the illicit market and into legal channels,” Adam Greenblatt, Canopy’s business development head, told CNBC.

He added, „It’s there to provide more variety and more of a value offering to ideally mature the market. Low-cost cannabis attracts bulk purchasers, people on the illicit side who would buy their cannabis by the ounce. People who buy cannabis by the ounce have been toughest to convert.”

Tilray, one of the world’s largest producers of premium medical marijuana, is launching a „no-frills cannabis brand” known as „The Batch.” It will be offered in three sizes, seven grams being the largest and a THC count of 10 to 15.9 percent.

„We expect our new product format and offerings to increase revenue and profitability over the long term,” the officer added.

Aurora will also introduce its value brand „Daily Special”, with a THC level of 15 to 21 percent. It will be available in three sizes, 15 grams being the largest.

The use and possession of marijuana is illegal in the U.S. under federal jurisdiction, but the law varies at the state level. Its use (be it recreational or medical) is legal across some states in the country.

A poll released by the Pew Research Center last November showed that the majority of Americans support the legalization of marijuana. The survey showed 91 percent of Americans to be in favor of legal marijuana for medical or recreational use (59 percent want both uses legalized), while 32 percent would support legalizing it for medical use only.

More than half of U.S. adults (52 percent) opposed the legalization marijuana in 2010 but by 2019, that figure dropped significantly by 32 percent. 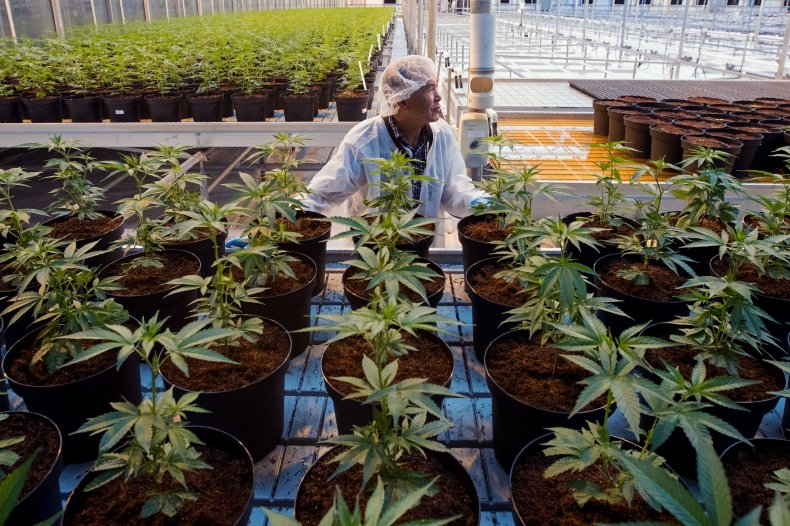 An employee managing cannabis plants at a cannabis factory in Lincoln, Ontario, on October 12, 2018. Getty Images