Big beer companies have invested millions of dollars into research and investment in cannabis. The budding Canadian THC and CBD-infused beverage market has seen delays out the gate, with some producers citing production challenges ahead of when the drinks became legal to sell Dec. 17, 2019. (Shutterstock)

Just a few steps into the Tweed retail cannabis shop in Osborne Village, potential customers pass by a prominent sign that boasts of THC and CBD-infused drinks, as well as a tall — and currently empty — fridge designed to keep the fizzy offerings cool.

It isn’t clear when the high-inducing carbonated beverages will be available at this store, or others.

„The one thing that we didn’t quite get right was managing expectations,” said Jordan Sinclair, vice-president of communications with Canopy Growth, which owns Tweed and Tokyo Smoke retail stores.

Despite the fact that these drinks have been legal for 2½ months, Canopy-owned companies aren’t the only ones without cannabis-infused beverages on store shelves.

Market experts are taking notice. This month, analysts downgraded expectations for how the Canadian cannabis market is expected to perform in 2020.

Experts with Cowen, a U.S.-based market research and analysis company, attribute this to a variety of companies facing supply-chain challenges or products under-performing out of the gate after so-called 2.0 products — edibles, topicals, drinks and more — became legal Dec. 17, 2019.

Many producers are banking on drinks, as with edibles, to draw in a new crowd of cannabis users who either haven’t partaken in a while — if ever — or who want to avoid inhaling methods.

Canopy initially showcased a line of canned products in the fall and planned to have them ready to go by January. 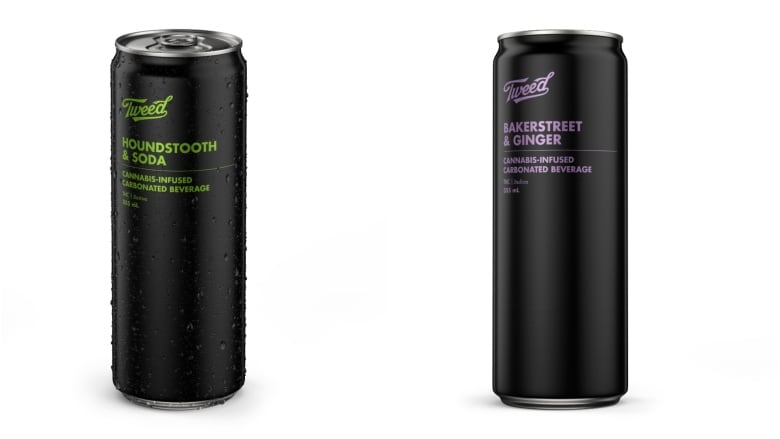 Two of the carbonated drinks produced by Tweed not yet for sale. Cannabis-infused beverages have been legal to sell since Dec. 17, but producers have hit delays and revised rollout times. (Supplied by Canopy Growth)

Sinclair wouldn’t say exactly why Canopy has had to revise its expectations, explaining that it had to do with challenges scaling up production.

He acknowledged research and development departments have had to grapple with a widely-known challenge related to canning cannabis drinks — interactions between ingredients and some can liners can cause the drinks to lose potency.

„We have a big R&D team, we’ve been working really hard on solving that problem,” he said, rejecting the idea that canning issues in particular could be at the root of delays at Canopy.

„It’s not that at the 11th hour we realized, 'Oh my goodness THC [and] can liners are a problem you have to deal with — this is something that we’ve known for a really long time.”

Carbonated drinks sometimes contain substances that can be corrosive and interact with the aluminum, which is why all canned drinks — from sodas to waters and alcohol — contain an incredibly thin polymer liner inside.

The question of how THC and mellower CBD-containing drinks might be interacting with these liners occurred to U.S. chemist Harold Han last year, after seeing a prominent beer company shift from selling its cannabis-infused drinks in cans to bottles south of the border.

„They lose their potency and that is one of the big challenges in the industry in California,” he said.

Han holds patents in emulsification chemistry and wondered what effect the psychoactive components might be having on can liners, so he went to the lab.

Han is chief science officer of California-based Vertosa, where he looked closely at a variety of cannabis-infused drinks and found something surprising.

To infuse the drinks, an oil extraction rich in CBD or THC was added, but some of the thin linings inside the cans then absorbs these oils.

The first rounds of tests showed the can linings were absorbing the bulk of the THC and CBD — drinks were losing up to 70 per cent potency five days after being canned, said Han.

„It was horrible,” he said.

Vertosa started working with can-liner companies to better understand how to make cannabis soluble. Eleven rounds of testing later, having tinkered with the chemical make up of can liners and with drink recipes, Han said Vertosa has had some success.

The latest tests show less than five to 10 per cent potency loss four months after canning, and it seems to plateau there thanks to some tinkering, said Han.

„It’s still a little bit lost … having some decay is reasonable,” he said. „This mission is not done until we have a better solution.”

The mission may be ongoing but Vertosa already has partnered with cannabis drink-makers, including Vita Coco based on the East Coast in the U.S.

The company produces coconut water products and has a new CBD drink for sale in a can due to Vertosa’s work, said Theresa Griffith, the company’s director of product development.

As for when Canadians can expect to see a retail cannabis market flooded with the new intoxicating drinks, that remains a little hazy.

Truss, a partnership between Quebec-based Hexo and Molson Canadian, said consumers can expect their products on sale in the first half of 2020. A spokesperson declined to be interviewed about delays and the nature of challenges drink production might be facing drink production.

The lone drinkable product for sale in Manitoba right now is a CBD-infused tea bag recently made available in Delta 9 and Canopy-owed stores. Canopy still plans to release its product line primarily in cans, said Sinclair.

The company isn’t comfortable providing even a rough timeline for when their products will be ready. They learned a lesson when they failed to deliver in January, said Sinclair.

„We’re at in the process right now [of] essentially just refining it to get it to a point where we’re proud of the product,” he said.

„We don’t want to put out another date and then miss that one even by a minute, so the next time that we’re going to be talking about these in a public way is when they’re available in market.”