Utah’s first medical cannabis pharmacy opened Monday, giving patients a long-awaited legal option for buying marijuana treatments without venturing outside the state and sneaking the products back to their homes.

Over the weekend, the state began accepting patient applications for medical cannabis cards, Oborn said early Friday, adding that the Utah Department of Health had so far issued 14. About 300 people have applied for the cards, he said.

Deanna Denmead, one of the state’s first cardholders, said she never smoked pot growing up in the ’50s and ’60s, even though marijuana consumption was all around her. She was afraid of the substance, believing it was addictive and a gateway to harder drugs.

“It was just a bunch of poppycock,” the Ogden resident said.

Opioids prescribed to Denmead after a hip surgery made her sick and gave her headaches. After she developed osteoarthritis in her knees, she was taking three or four ibuprofen pills at a time, and even those heavy dosages didn’t entirely wipe out her pain.

Marijuana, on the other hand, has offered her relief without side effects, she said. On Monday, Denmead said she planned to buy cannabis-infused salve, which she rubs on the back of her knees and her feet to find relief.

To qualify as a marijuana patient, a person must suffer from a medical condition specified in state law — including cancer, HIV, epilepsy, autism, multiple sclerosis or unmanageable pain lasting longer than two weeks — or receive approval from a state-appointed board of physicians.

The rollout of the state’s electronic patient portal over the weekend wasn’t glitch-free, Oborn said, but state officials were able to work with vendors to fix some of the problems with website navigating and payment processing. Going forward, they’ll keep tweaking the site to make it more intuitive and user-friendly, he said. 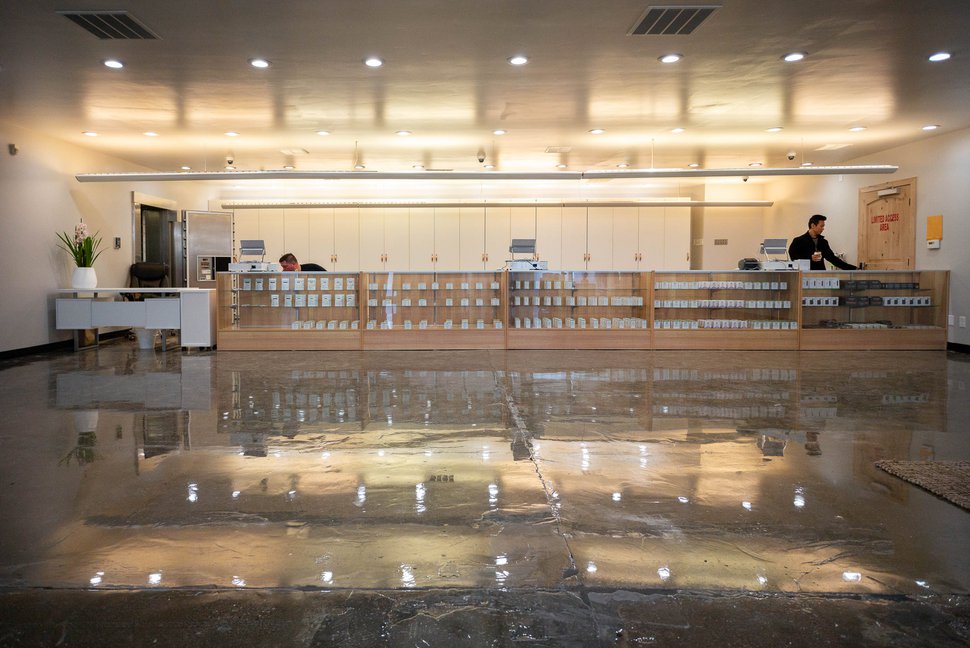 Now that a marijuana pharmacy has arrived on State Street, almost all components of the state’s cannabis program are up and running, albeit at a small scale. Seven of the eight licensed cannabis cultivators have plants in the ground, and they’re prepared to produce more as the program grows, said Andrew Rigby, cannabis program manager for the Utah Department of Agriculture and Food.

And so far, more than 80 medical providers have registered with the state to recommend cannabis to patients, Oborn said.

The past few weeks have been a race to the finish line as state officials and Dragonfly have pushed to meet the early March target for Utah’s cannabis program rollout. Legislators on Thursday passed a last-minute package of tweaks to the marijuana law, and Panh said he and his colleagues have been putting in 16-hour days to prepare for Monday’s launch.

Just hours before the pharmacy opened for business, Panh gave reporters a tour of the business — a former Bank of Utah building still equipped with a working vault. Neatly boxed tinctures, vape cartridges, salves and chews lined spotless glass shelves beneath the service counter at the back of the spacious room.

Panh highlighted Dragonfly’s local ties, explaining that all of its investors are from Utah. Owned by the restaurateurs behind Sapa Sushi Bar and Grill, Dragonfly is a vertically-integrated company that has a cannabis farm near Moroni and a processing facility that turns the plant material into products ready for sale.

The state is handling product testing until the program expands enough that it makes economic sense for private labs to invest in the necessary testing equipment, Rigby said.

Dragonfly Wellness, which currently has 16 employees, will be open seven days a week from 11 a.m. to 8 p.m. Connected to the pharmacy is a community center where Dragonfly will host events for health professionals and others who want to learn more about cannabis as a medicine, Panh said.

Utah’s medical cannabis program is years in the making, with advocates waging a long fight to persuade conservative state lawmakers to give patients access to the substance. The debate came to a head with the success of a citizen initiative to create a medical marijuana program, an effort that forced state leaders to the negotiating table.

After the passage of Proposition 2 in late 2018, state legislators convened in a special session to replace the initiative with a different cannabis proposal — one brokered between initiative opponents such as The Church of Jesus Christ of Latter-day Saints and supporters such as the Utah Patients Coalition. But it also fractured the medical marijuana community, with some patient advocates incensed that the state would tamper with the citizen-led initiative.

But Rigby said he’s impressed with the program that the state and its private partners have pulled together in a matter of months.

“Hopefully, this is a wonderful start to a … successful program here in Utah,” he said.