Valens to launch THC, CBD drinks in Ontario with A1 Cannabis

Cannabis extraction company Valens is ready to bring its infused drinks to market. The company said Thursday it plans to launch a pair of white-labelled beverages to Ontario pot retailers with its partners A1 Cannabis Company. The beverages will include one CBD-only drink and another that contains 2.5 milligrams of THC. Prices for the products were not immediately available. Altacorp analyst David Kideckel said in a research report that Valens’ SōRSE technology may help the company distinguish its offerings on taste, texture and offset and onset time from its competitors. Kideckel estimates the market size for pot-infused drinks in Canada ranges between $200 million to $250 million.

The U.S. Food and Drug Administration gave an update on Thursday on its plan to regulate CBD-infused products. The agency said it still knows very little about the potential effects of sustained or cumulative use of CBD and how it could impact children, the elderly or pregnant women. While known risks have been identified, the FDA said it is not at a point where it can conclude that unapproved CBD products are safe for use. The FDA also said it is looking to acquire more data to improve any  research gaps on CBD. “We are committed to working efficiently to further clarify our regulatory approach to these products – as always, using science as our guide and upholding our rigorous public health standards,” the FDA said.

Ontario’s plan to sell cannabis was one of the nominees for the Canadian Taxpayers Federation annual Teddy awards, which helps to draw attention to government spending waste. The nomination detailed how Ontario lost $42 million in its first full year of selling legal cannabis in the province and was highlighted by expenses that totalled $106 million. Some of the expenses included $23,000 to administer a single webinar and roughly $600,000 spent on the company’s logo, the CTA – a citizens advocacy group – said. Ontario attributed its first-year of losses to the start-up costs needed to establish its legal pot business.

A Mexican Senate committee has passed legislation aimed at legalizing cannabis in the North American country, according to Marijuana Moment. The law – which needs to be approved by the country’s Senate and then the “Chamber of Deputies” – would allow adults 18 and older to possess and cultivate marijuana for personal use. It would also cap personal possession at 28 grams and charge a 12 per cent tax on all cannabis sales, the website reports. However, full legalization of recreational cannabis may be tricky to pass into law given that the Mexican president only supports legalization of the plant for medicinal purposes, according to Mexico News Daily. Policymakers have until the end of April to pass the laws needed to legalize recreational cannabis, according to a ruling from the country’s Supreme Court. 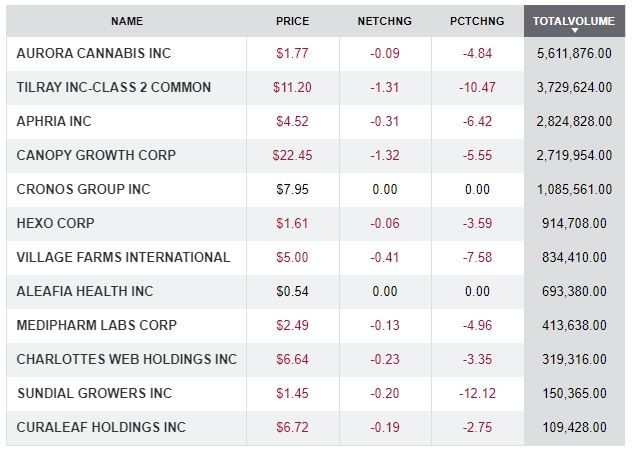