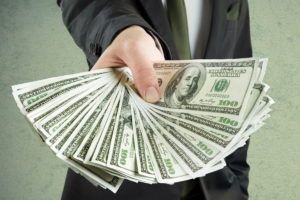 Could it be a win-win deal?

An increasing number of investors – including mainstream investment banks new to cannabis – have begun seeking out cash-strapped marijuana companies with the aim of pumping money into them to provide a financial lifeline.

The investments offer the distressed companies a chance to get back up on their feet.

In return, investors get the opportunity to take a financial stake in a company, restructure it and put the business on the road to recovery – all with the aim of making a profit on the investment.

The investment stake can take the form of equity or debt.

The fresh investor interest offers struggling marijuana companies an alternative form of financing at a time when more traditional forms of MJ funding – including private offices and venture capital firms – have dried up.

Investors can brand themselves as “lenders of last resort” that can go into cash-strapped companies and restructure them so as to avoid a fire sale of distressed assets and survive, said Rod Stephan, a partner at New York-based Altitude Investment Management.

Many cannabis companies are finding themselves in distress as their revenue is not keeping up with their expenses, pushing them further into debt and not having the benefit of bankruptcy protection under federal law.

“Astute market players can carefully assess equity opportunities, or they can go into debt (transactions) at a slightly lower return but where things are secured by the assets of the company,” Stephan said.

To date, Stephan and his team have mainly focused on equity stakes in cannabis companies.

But with public capital now not readily available and private investors increasingly unwilling to take ownership, attention is turning to debt restructuring as some companies suffer from high capital expenditure and insufficient revenues.

Many companies – particularly private ones – remain well run and relatively solvent but it is the debt-ridden firms they are exposed to that often causes cash-flow problems, said Rob Hunt, principal and founder of California-based investment group Linnaea Holdings. His company looks to invest in cannabis companies with a view to taking a controlling stake.

“There are decent companies out there at distressed prices who are caught up in an overcorrected downturn,” Hunt said. “They have exposure to other businesses that are close to being insolvent, but they have shown financial prudence themselves and are in decent shape right now.

“But it is difficult for them to raise capital.”

Such an industry correction, while both inevitable and painful for many, does have a flip side, said Henry Owsley, CEO of New York-based Gordian Group, an independent investment bank specializing in distressed financial situations.

“This is not a huge industry by any stretch of the imagination, but it may very well get there,” Owsley told Marijuana Business Daily.

“In doing so, there will be a lot of destruction of capital and creation of wealth. In any kind of turmoil like that, there will likely be a screaming need for financial restructurings.”

Cannabis companies are turning to innovative ways to deal with their cash-flow problems, and that’s because they are largely forced to do so given the lack of federal bankruptcy protection.

If they don’t go down the route of asset sales, they might turn to financial solutions that result in similar solutions to conventional bankruptcy.

“It’s a complicated question, and it is further complicated by the lack of Chapter 11,” said Frank Colombo, a New York-based cannabis analyst and consultant.

Gordian’s Owsley said his company’s priority in any such restructuring would be protecting client companies.

While Canadian bankruptcy law, which has been suggested as a possible but difficult route for some U.S.-based cannabis companies, remains favorable to creditors, the lack of U.S. protection means banks will have to work hard to protect their clients from such creditors.

“It all depends on the client’s objectives, but we would want to enhance existing stockholder value and not transfer that wealth to creditors,” he said.

For now, major investment banks are exploring the opportunities.

Multiple sources, for example, said that Los Angeles-based Houlihan Lokey – a major M&A and restructuring bank – is now looking at the industry given the current climate. A Houlihan Lokey representative declined to comment.

Others are on the sidelines looking in and dipping their toes in the water, Owsley said.

“So far, it’s not a big blip on our radar screens. I’d be surprised if people in our industry were not all looking at this in some way or another, but it is premature,” he said.

“In terms of the industry, it is almost there. There are several companies having issues this year they need to address. We know this because we are talking with the lawyers at these companies, which are not yet truly at the crisis stage.”

Some, however, might have already hit such a crisis stage.

While the bigger tier 1 multistate cannabis operators might have enough clout to secure high amounts of debt to fund their obligations and expansion – think the likes of Cresco Labs and Curaleaf – other less liquid companies could find themselves needing to sell assets or involve themselves in financial restructuring.

For example, California-headquartered MedMen offered to pay its vendors in equity, and Ohio-based Green Growth Brands said it is going to sell its CBD business because of a lack of cash and excessive costs.

Green Growth Brands, which consultant Colombo described, along with MedMen, as a tier 4 operator given its cash problems, confirmed its previous statement that it might struggle to continue as a “going concern” when it released quarterly results Feb. 24. That same day, Green Growth Brands said it will sell the struggling CBD business.

“There are a few (public) companies in distress,” Colombo said. “MedMen we’ve all heard about, and Green Growth also appears to have a low level of liquidity.”

And then there are public companies that don’t fit into either the top tier or the truly distressed, Colombo added, so-called tier 2 operators. Such companies are caught between potentially selling assets or going into the equity markets.

“They may have to turn around and sell off assets, but few of them have decided to do that yet,” he said. “More likely, they will be selling dribs and drabs of equity at market prices.

“Those who aren’t already in distress are probably capable of going to the equity markets, but it isn’t something they want to do.”

Cannabis stock prices have declined on average about 16% since the beginning of the year, Colombo said, and “that comes on the back of 2019, when they were cremated.”

“We are seeing a downturn in the cannabis market that is certainly going to last through 2020,” he said. “There will be more layoffs and more people searching for capital, and that is an opportunity for us.”

Nick Thomas can be reached at [email protected]

Click here to read a Q&A with a cannabis industry veteran as he discusses why he now invests in distressed MJ companies.

For analysis and in-depth looks at the investment trends and deals driving the cannabis industry forward, sign up for our premium subscription service, Investor Intelligence.