Despite having more cannabis retail stores than any other province, Alberta continues to lose money in the retail cannabis industry. (Robert Short/CBC)

Albertans are among the biggest consumers of legal cannabis in Canada but it may still be several years before the provincial government turns a profit in the industry.

The Alberta government is expecting to lose around $26 million in the 2019-20 fiscal year and will continue to be in the red the next three years, due to setup, administration and inventory costs. The 2020-21 fiscal year is expected to be even more in the red, with a net loss of $36 million.

The province wasn’t expecting to make money in the first two years; even the previous NDP government had projected to lose about $90 million until 2020-21 when the province expected a net income of $37 million.

According to Statistics Canada, in the first year of legalization the province was second in the country in total retail sales, generating about $196 million.

Though Alberta has more cannabis retail outlets than any other province — 423 locations — the industry still faces challenges, both in establishing a framework for legal cannabis and with illicit market competition.

Setting up any new industry can be costly and cannabis isn’t any different.

You can’t expect to be making a profit right away, said Alberta Gaming Liquor and Cannabis (AGLC) spokesperson Heather Holman.

A lineup forms outside a cannabis store in Edmonton an hour before it opens its doors for the first time in October 2018. (Andrea Ross/CBC)

„There’s new systems and people and lots of resources that are required for that.”

When it comes to cannabis, AGLC handles the province’s regulation, warehousing, distribution and operation of the government’s online store.

The industry dealt with supply issues shortly after legalization in October 2018, and again during the launch of 'cannabis 2.0′, when cannabis edibles, beverages, concentrates and topicals became legal.

Holman said other than some „bumps in the road,” the province has done a good job establishing and regulating a new industry.

„I always say: 'A plant doesn’t grow overnight,'” she said. „So there were initial challenges where licensed producers weren’t able to perhaps produce to the demand that was across the country or perhaps the various retail models that may have impacted supply. But then we got over that hurdle.”

Maurizio Terrigno, founder of the Calgary-based Canadian Cannabis Chamber of Commerce, said Alberta has done better than other provinces when it comes to establishing retail cannabis stores, but the province could still do better to support the industry.

„The government on the regulator side I truly believe have dropped the ball,” said Terrigno. „They are in direct competition with the free market. They have the online platform which I believe is a hindrance to the retail. And it is not being supportive.”

Nathan Mison, chair of the Alberta Cannabis Council and vice president of government and stakeholder relations for Fire & Flower, said Alberta had an advantage because AGLC already had an understanding of how to do private retail stores for a regulated product.

„I think Alberta was able to move fast because it did something that it already understood,” he said. 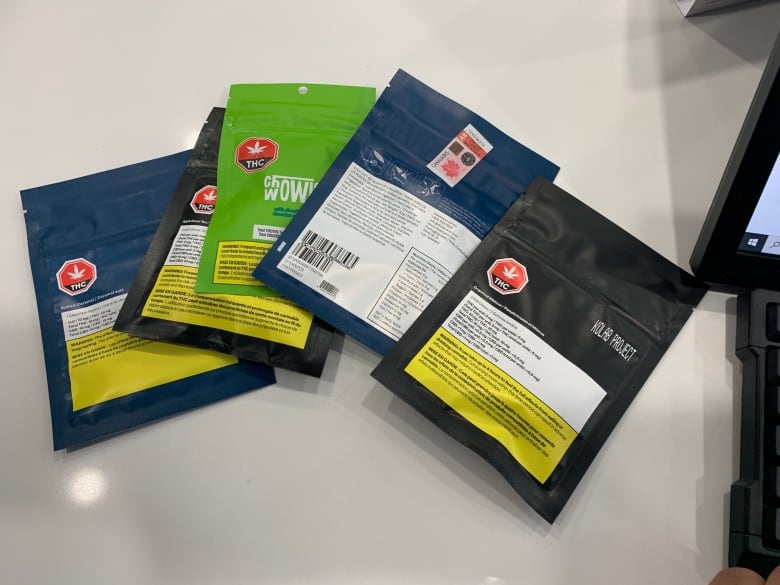 A variety of THC-infused cannabis edibles, including soft chews, chocolate bars and chocolate squares, are now available at some cannabis retail stores in Alberta, though the launch of edibles was delayed. (David Bajer/CBC)

Mison, who is also co-chair of the national cannabis working group for the Canadian Chamber of Commerce, said the fundamental purpose of cannabis legalization was to give Canadians access to safe and regulated cannabis, keep cannabis out of the hands of youth and eliminate the illicit market.

And while the province and the country have done a decent job in the first two, Mison said there is still work to be done when it comes to the unregulated illicit market.

Both Terrigno and Mison said number one issue facing the cannabis industry is competition from the illicit market.

„In essence, it has no handcuffs; it can do whatever it wants and it does every day,” Terrigno said. „The worst part about it is they get away with it and pay no tax.”

Terrigno said illicit online retailers are able to offer better selection and prices than licensed retailers and law enforcement have been turning a blind eye to illegal cannabis.

According to Statistics Canada data, in the first year of legalization about 40 per cent of cannabis users obtained product from illegal sources.

Holman said the illicit market remains a concern; AGLC reduced its shipping fees on the online store in November.

„By reducing the shipping fee, that kind of put the retail price of cannabis on the online store closer in alignment with prices in the illicit market,” she said. „That’s going to be probably a longstanding battle but any opportunity to bring those prices down, does bring it closer.”

Holman pointed out that there is no markup charged on cannabis like there is on alcohol in Alberta, though Alberta does have higher excise taxes than other provinces. Unlike other provinces, however, Alberta does not have provincial sales tax. There will also be a 20 per cent tax added to cannabis vaping products, which the government announced in the 2020 budget.

Though the province will be running in the red when it comes to legal cannabis, there are still positive signs for the industry.

„The growth in cannabis revenues is due to factors like population growth and new products coming online as the market evolves,” said Jerrica Goodwin, press secretary to the finance minister, in a statement.

Mison said there is plenty of potential growth in the industry including cannabis wellness products, cannabis lounges and cannabis-infused dinners and drinks.

„The analogy I like is that cannabis is an iceberg: We’ve only seen 10 per cent right now of 90 per cent to come.”